LOS ANGELES (JTA) — The prevalence of transgender issues in pop culture seems to have reached a pinnacle this year.

Caitlyn – nee Bruce – Jenner appeared on the cover of Vanity Fair. The movie “Tangerine,” which stars transgender actors, took film critics by storm. Director Tom Hooper’s “The Danish Girl,” currently in theaters, tells the story of one of the first sex-change operations. And the second season of Amazon’s Emmy Award-winning “Transparent,” about a Jewish family coming to terms with their father’s decision to become a trans-woman, was released to raves on Dec. 11.

At the same time, the Jewish community is coming to terms with how to include transgender Jews in synagogues, workplaces, schools and summer camps. In November, for example, the Union for Reform Judaism unanimously passed a “Resolution on the Rights of Transgender and Gender Non-Conforming People.” It points out past efforts to include transgender people —  the Hebrew Union College-Jewish Institute of Religion admitted its first openly transgender rabbinical student in 2003 — but concludes “there is more work to be done to make our Movement and our society fully inclusive of transgender and gender non-conforming people.”

“That means that for 84 percent of Americans, everything they know about transgender people, they learn from the media,” said Nick Adams, director of programs for transgender media at the LGBT media advocacy organization GLAAD and a transgender man. “For the past 60 years, trans characters have been portrayed as either psychotic killers, as in ‘Silence of the Lambs,’ or the butt of jokes, as in ‘Ace Ventura: Pet Detective.’”

READ: How a trans Jewish father inspired a hit series

The long-running CBS soap opera “The Bold and the Beautiful” introduced a transgender plotline this year in which the lead model for a fashion company, Maya Avant (played by Karla Mosley) is outed as transgender. The show also includes transgender actor Scott Turner Schofield playing the recurring role of Nick, a transgender man and Maya’s friend.

“Only very recently have film and television portrayals of transgender characters begun to move beyond these offensive, defamatory stereotypes,” Adams said. “I do believe that shows like ‘Sense8,’ ‘Transparent’ and ‘The Bold and the Beautiful’ are allowing viewers to develop a greater understanding of the transgender experience.”

This gradual “mainstreaming” of transgender issues has had a profound effect: Research indicates that increased awareness of transgender issues may also lead to more legal protections. More than two-thirds of residents in every state support transgender non-discrimination laws, according to a new study by researchers at the Williams Institute at the UCLA School of Law, even though not every state has passed them.

In this spirit, the issues that transgendered people face are increasingly addressed within a Jewish communal context, too.

“The more it’s been talked about in popular culture, there has been more willingness of families and parents to try and understand when their child presents differently than ‘the norm,’” said Rabbi Denise Eger, the founding rabbi of Congregation Kol Ami in West Hollywood and a longtime LGBT rights activist. “We’re able to talk about it now earlier, before kids go through puberty, because we’re listening to the voices of our children, we’re listening to the voices of our families in our congregations, and we’re able to provide resources.”

“The rabbis of the Talmud were way more comfortable identifying and talking about a spectrum of gender identity than rabbis are today,” said Miryam Kabakov, co-executive director of Eshel. “We try to remind them of that.” 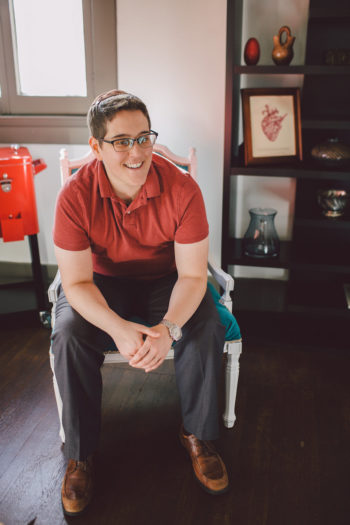 Rabbi Becky Silverstein of The Pasadena Jewish Temple and Center was singled out in a column coming out against transgender inclusion in synagogue life. (Evangeline Lane)

Many Jews looking to bring transgender education to their community are turning to the Institute for Judaism, Sexual Orientation & Gender Identity at HUC-JIR. Its director, Joel Kushner, trains seminary students and consults Jewish institutions on helping transitioning youth and adults feel welcome.

Kushner said the higher visibility of transgender issues in pop culture is emboldening trans people to “come out” and be spokespeople for the cause.

“The calls that I get are almost always spurred by real-life situations that someone is faced with, and they’re looking for help,” Kushner said. “They’ve been made aware by ‘Transparent’ and all that, and I think it moves them a little bit to take more action because it has become more prevalent, like in ‘Orange Is the New Black’ [featuring Emmy-nominated transgender actress Laverne Cox]. I was getting the calls before, but it’s almost like the popular culture references have given those who want to do this in their communities a little bit more support or latitude.”

But not all Jews are so eager to embrace transgender inclusion. Earlier this month, conservative radio host and columnist Dennis Prager published an incendiary column in The Jewish Journal titled “The Torah and the Transgendered” on Dec. 4, and a follow-up, “The Hate Is All in One Direction” on Dec. 11. In his first column, he warned against “dropping the Torah and substituting compassion as standards” for accepting transgender people in our congregations, suggesting that “we are creating a Brave New World in which definitions of male and female no longer have meaning” and that “we are playing with fire and that future generations will pay a big price for this unprecedented experiment.”

READ: Member of prominent Hasidic family comes out as transgender

The reaction from the Jewish community was swift and uncompromising. In the pages of The Jewish Journal, Rabbi Joshua Levine Grater of the Pasadena Jewish Temple and Center lambasted Prager’s “public display of ignorance and willful misreading of Jewish texts, primarily the Torah.”

Rabbi Heather Miller of Beth Chayim Chadashim, an LGBT Reform synagogue in West Los Angeles, wrote to Prager that “the type of shaming and verbal violence you inflict through the power of your pen and spoken word kills.” Others pointed out in letters published in the Jewish Journal that the Mishnah and Gemara acknowledge six different genders that include male, female and various combinations of the two, and that the Torah is hardly as narrow-minded as he portrays it to be.

Prager also singled out one transgender rabbi in his column: Rabbi Becky Silverstein, director of education at the Pasadena Jewish Temple and Center, who was raised female but identifies and presents as a transgender male.

“Obviously the congregation and the rabbi believe that the Torah’s view on gender distinction is irrelevant,” Prager wrote.

Silverstein told JTA he feels supported by his congregation and the larger Jewish community, before and since the column was published. He sees the debate over transgender Jews as a natural progression of the efforts to make gay and lesbian Jews feel included, and part of a wider conversation about gender identity made visible through popular culture.

“I’m sure there were folks struggling with these issues privately” before it became a mainstream topic of discussion, Silverstein said. “We know that before [the Jewish Theological Seminary] ordained lesbian and gay rabbis, there was a secret society of lesbian and gay rabbis who met and talked each other through being closeted. So these institutions existed, but certainly not in the public eye.”

As transgender people become more accepted in traditional Jewish spaces, Silverstein expects that many gendered Jewish rituals will be reconsidered, from allowing people to self-identify their side of the mechitzah, the divider separating the men’s and women’s sections of the synagogue, to the inclusion of a female-to-male person in an Orthodox minyan to the pronouns used to call someone to read from the Torah.

Ultimately, Silverstein said, recognizing these distinctions can benefit everyone.

“If we can master nuance in different narratives of the trans community, certainly we can recognize nuances in different people’s journeys throughout our community, whether they relate to gender or other things,” he said.