Tel Aviv shooter identified as Arab-Israeli with history of violence 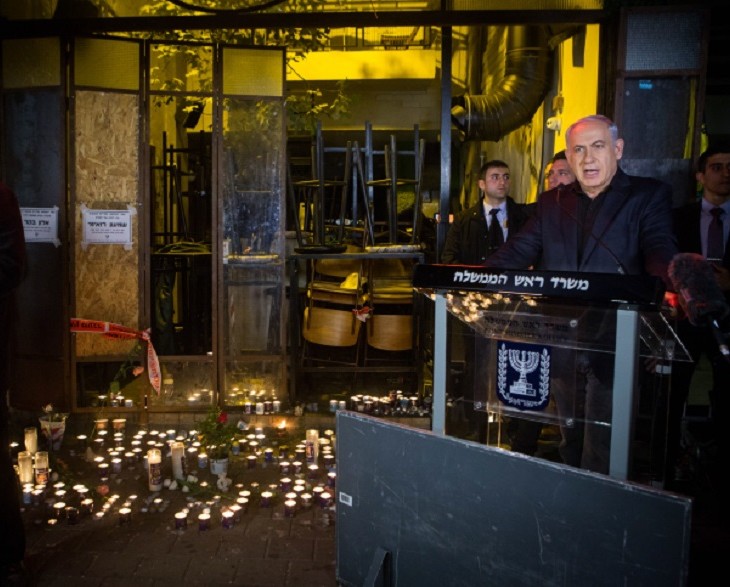 Israeli Prime Minister Benjamin Netanyahu speaking at the scene of the deadly shooting a day earlier outside a pub on Dizengoff Street in central Tel Aviv, Jan. 2, 2016. (Miriam Alster/Flash 90)
Advertisement

JERUSALEM (JTA) — The gunman who shot up a bar in central Tel Aviv, killing two, was an Arab-Israeli man with a history of violence, Israel Police said.

The attacker was named as Nashat Melhem, 31, of Arara, a village in Wadi Ara in northern Israel. A gag order was lifted on his identity on Saturday evening, the day after the shooting that also injured several people.

As of Sunday night, a massive manhunt was on for Melhem, who received a five-year jail sentence in 2007 for attacking an Israeli soldier and attempting to seize his gun.

Schools in Tel Aviv opened as scheduled, but only about half the students showed up. Tel Aviv Mayor Ron Huldai said children whose parents did not send them to school would not be penalized.

Leaders of the Arab-Israeli community in Wadi Ara condemned the attack.

Melhem’s father, a volunteer policeman, called police Friday after seeing security camera footage of the attack on television and recognizing his son. Melhem’s brother, Jaudat, was arrested Friday on suspicion of being an accessory to the crime, according to reports.

The shooter opened fire on a pub next to the popular Dizengoff Center Mall in an area full of people enjoying what is a weekend afternoon in Israel.

In 2007, Melham said he attacked the soldier to avenge the death of his cousin, who was killed in 2006 in a police raid. Melhem also was arrested prior to his jailing for selling drugs. According to the family attorney, he suffers from mental disorders.

Israeli Prime Minister Benjamin Netanyahu visited the site of the Tel Aviv attack on Saturday night. Standing amid a makeshift memorial to the victims of the attack, including dozens of memorial candles, he sent condolences to the families of the victims of what he called a “heinous and unbelievably vicious murder,” and wishes for a quick recovery to the injured. He called on the public to be on “maximum alert.”

“I appreciate the condemnations of the crime that have been made by the Arab public,” Netanyahu said. “I must say that I expect all Arab MKs, all of them without exception, to clearly condemn the murder without hesitation. Murder is murder, and must be condemned and acted against from whatever quarter.”

The prime minister also acknowledged what he called “wild radical Islamic incitement against the State of Israel in the Arab sector.”

“There is incitement in mosques, in the educational system and in social media,” he said. “I am not prepared to accept two states of Israel — a state of law for most of its citizens and a state within a state for some of them, in enclaves in which there is no law enforcement and in which there is Islamist incitement, rampant crime and illegal weapons that are frequently fired at events such as weddings. This era has ended.”