The Jewish TV show you should be watching: ‘Crazy Ex-Girlfriend’ 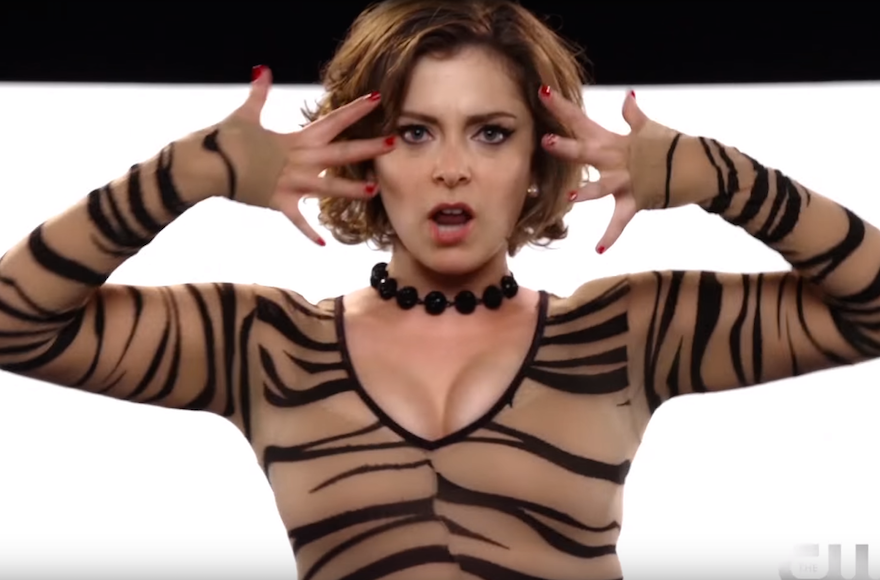 Rebecca Bloom, the creator and star of "Crazy Ex-Girlfriend," in a musical scene from the series. (Screenshot from YouTube)
Advertisement

NEW YORK (JTA) — If the ratings for CW’s newest show, “Crazy Ex-Girlfriend,” are any indication, you probably aren’t watching it. If not, you’re missing out.

Now that creator and star Rachel Bloom is nominated for a Golden Globe for best actress in a TV series — fingers crossed for her on Sunday! —  it’s time to tune in. “Crazy Ex-Girlfriend” is hilarious and zany, and as it happens, it addresses Jewish identity in unexpectedly profound ways.

The series is the story of Rebecca Bunch, a successful New York lawyer who follows her summer camp ex-boyfriend to small-town California, never mind he’s in a serious relationship with someone else. The musical comedy features lots of singing and dancing, the campy products of Rebecca’s wild imagination. These aren’t your typical Broadway numbers, though the show features the talents of stage veterans Santino Fontana and Donna Lynne Champlin.

Rebecca’s Judaism is a huge part of the series, recurring in ways both explicit and subtle. Few other shows — Amazon’s “Transparent” excepted — deal with Jewish identity this deeply.

Typically on TV, Judaism is little more than a plot device — like on “Friends,” where the Jewishness of Ross and Monica Geller is most likely to come up with a token Christmastime mention of Hanukkah. Or characters like Schmidt, on “New Girl,” who uses Jewish phrases all the time, but typically just plays them for laughs.

On “Crazy Ex-Girlfriend,” Judaism is more than just a punchline — though it’s certainly that, too. This was apparent during the midseason finale, which begins on a boat from Europe to America in 1901.

“I know we are fleeing,” a mother tells her daughter, “but you couldn’t comb your hair?”

Jewish daughters will probably laugh in recognition. But what’s significant here is that the entire scene is in Yiddish. A sprinkling of Yiddish phrases may be heard on television here and there, but name another mainstream show that’s had an entire scene in the language.

Other comedic moments point to larger truths. As Rebecca replaces Christmas decorations with Hanukkah ones before her mother’s visit, she wonders: “Chanukah. Hanukah. Hanuk-kah. Which one of you is right?” It’s a moment both funny and familiar, with a nod toward informal comfort that many young Jews today feel among Christian symbols.

For single Jewish women, the show hits another nerve: Rebecca’s mother, a perfectly cast Tovah Feldshuh, finds many ways to hint that her daughter should be married. After finding a stash of condoms, for example, she tells Rebecca she won’t get a husband “that way.” The relationship is reminiscent of Rhoda Morgenstern, the prototypical single Jewish female, and her mother on “Rhoda,” a spinoff of “The Mary Tyler Moore Show.”

Rhoda, however, never had to deal with the minefield that online dating — another cultural phenomenon that “Crazy Ex-Girlfriend” hilariously nails. In one episode, after Rebecca takes a Tinder date back to her place, she performs a slinky number with the refrain: “Hey sexy stranger, come back to my place and I hope you’re not a murderer.”

If there’s one line that best captures how Judaism plays in “Crazy Ex-Girlfriend,” it’s the riposte by the mother to Rebecca’s claim that if she has a child, she would only want her to be happy.

“Our people are not about happy,” the mother says. “We’re about survival.”

In “Crazy Ex-Girlfriend,” Rebecca moves across the country to be happy, but it’s not easy. She struggles. She suffers through bad dates and endures pretty girls who poke at her self-esteem. She faces everything else life throws at her — and comes out (relatively) intact on the other side. What could be more Jewish than that?

Although the ratings haven’t been great, CW has ordered more episodes for a total of 18 for the first season. The show returns Jan. 25, so you have plenty of time to catch up.

You can thank me later.