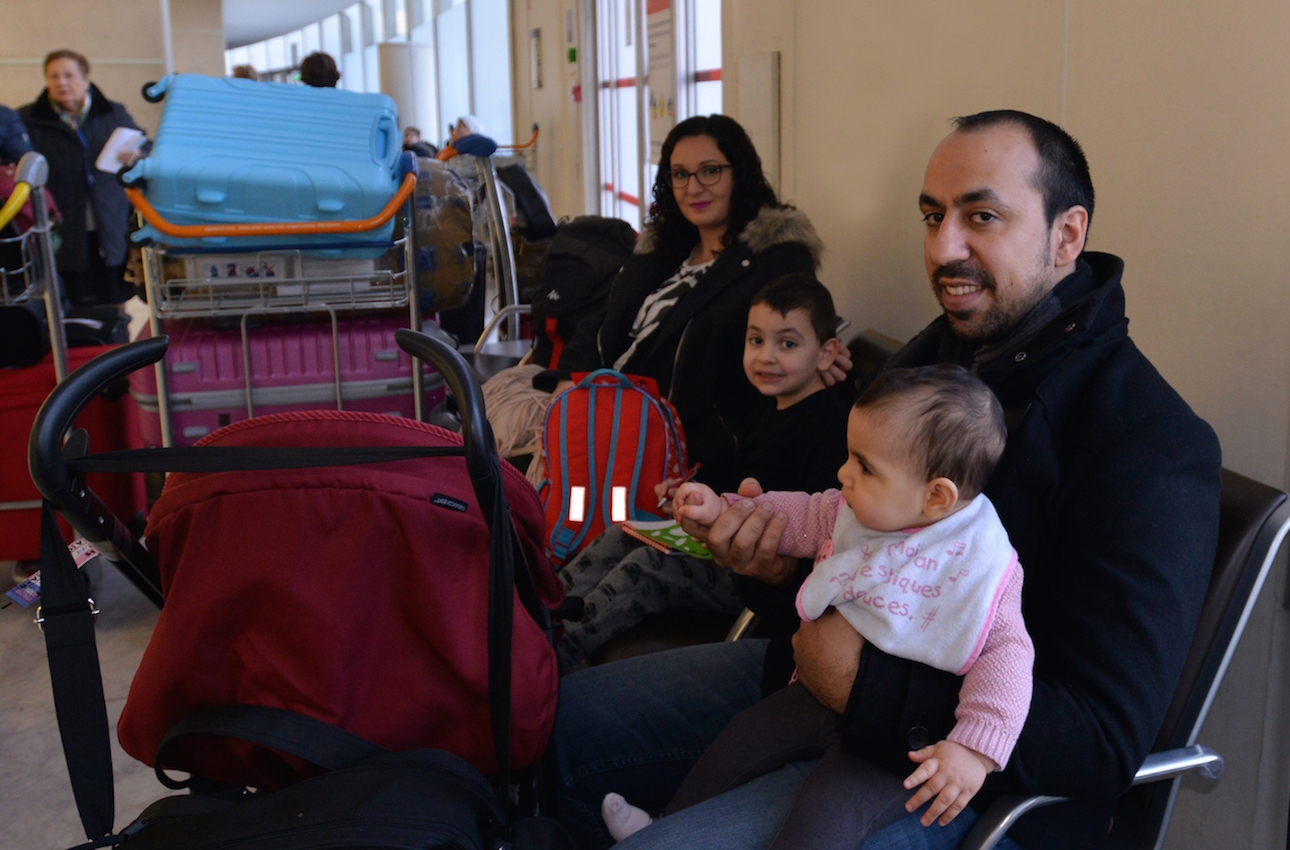 PARIS (JTA) — Last year may have been traumatic for France and its Jews, but it was a pretty good one for Rudy Abecassis.

In a year that began with the Charlie Hebdo shooting and the subsequent killing of four at a kosher supermarket in Paris, Abecassis, 32, a Marseille-born computer specialist who moved to the Paris region in 2009 to find work, had a good job at a time of rising unemployment.

The income was sufficient that his wife, Emilie, was able to quit her secretarial job after the birth of their second child over the summer. The couple shared a spacious apartment in Bussy-Saint-Georges, a middle-class suburb that has been spared the anti-Semitic violence prevalent in other areas around this city.

Yet on Dec. 27, Abecassis and his family left behind their comfortable lives and moved to Israel, joining nearly 8,000 French Jews who immigrated to Israel in 2015.

“We’re not fleeing,” Abecassis said last month, as he and his family prepared to spend their last night as Parisians on an inflatable mattress in an otherwise empty home. “Our lives here have been good and we love France for it. We’re leaving with sorrow, but we want to live in a Jewish country of our own, where we are not outsiders who need to be tolerated.”

French immigration to Israel, or aliyah, has rocketed to record levels over the past three years as the country has confronted rising anti-Semitism and a series of attacks that claimed nearly 150 lives in Paris in 2015.

But while violence against Jews is often identified as the major driver of French aliyah, many immigrants cite a broader mix of reasons for choosing to leave, including Zionist sentiment and alienation from an adamantly secularist society increasingly intolerant of the religiously devout.

“The reality is more complex than the narrative according to which French Jews are leaving in record numbers because they’re feeling threatened by their Muslim neighbors,” Daniel Benhaim, France director of the Jewish Agency for Israel, the quasi-governmental body responsible for facilitating aliyah.

Benhaim cites as evidence the fact that a majority of French Jewish emigres come from middle- and upper-class areas with little anti-Semitism. Only 15 percent are from poor areas with large Muslim populations and a high incidence of anti-Jewish attacks – a result, Benhaim said, of a reluctance to forego France’s generous social welfare benefits.

“Those who leave can afford to let go of the French welfare system,” Benhaim said. “Mostly they live where anti-Semitic attacks are relatively rare, and in many cases, anti-Semitism is not a primary catalyst for moving but a sort of a background presence.”

For religious Jews, France has become a less welcoming nation in recent years. Confronted by the struggle with radical Islam, the nation’s well-established policy of public secularism has grown even more stringent, with heated debates on pork-free menus in school cafeterias and heightened criticism over municipal funding for Jewish institutions.

Abecassis told JTA that he refrains from wearing a yarmulke in public – not out of fear for his physical safety, but because doing so would be “out of place, almost defiant.” Others say they feel socially excluded because of their faith.

“I see how the guys at work look at me, with my beard and kippah,” said Eran Azoulay, who immigrated to Israel with Abecassis and 15 others on Dec. 27 as part of the newly launched French aliyah program of the Jerusalem-based International Fellowship of Christians and Jews. “They’re not going to invite me to the pub after work. I am living in a bubble because I’m religious, and Israel’s the only place where I can step out of the bubble.”

To French Jews who live in more violence-prone areas, the aliyah spike feels like a kind of capitulation. Prosper Ovadia, 63, the owner of a single-chair barbershop in Paris’ 10th arrondissement, a crime-stricken area with a large Muslim and African population, said he refuses “to run away from the scum who are trying to throw me out.”

Still, Ovadia concedes it would be unwise to forego the $1,500 he receives monthly in welfare benefits.

“Anti-Semitic attacks or not, I can live with dignity here,” Ovadia said. “Not in Israel.”

Despite its difficulties in competing with the French welfare system, Israel has received record numbers of French immigrants since 2013, when 3,000 Jews moved to Israel. The following year, the number more than doubled to 7,238, an all-time high that made France for the first time the Jewish state’s largest source of immigrants in any given year. France maintained that distinction in 2015 with 7,900 emigres.

Abecassis says he and his wife never even contemplated leaving before 2012, the year their eldest son, Noah, was born. It was also the year an Islamist killed four Jews at a Jewish school in Toulouse, prompting the government to post armed guards at Jewish schools.

Abecassis realized he had to choose between sending his son to a Jewish school guarded by a soldier with a machine gun or a secular public school.

“We’re not really afraid he’ll be shot,” Abecassis said. “Statistically, Israel is more dangerous. We just wanted him to grow up like a normal Jewish French kid, as we had.”