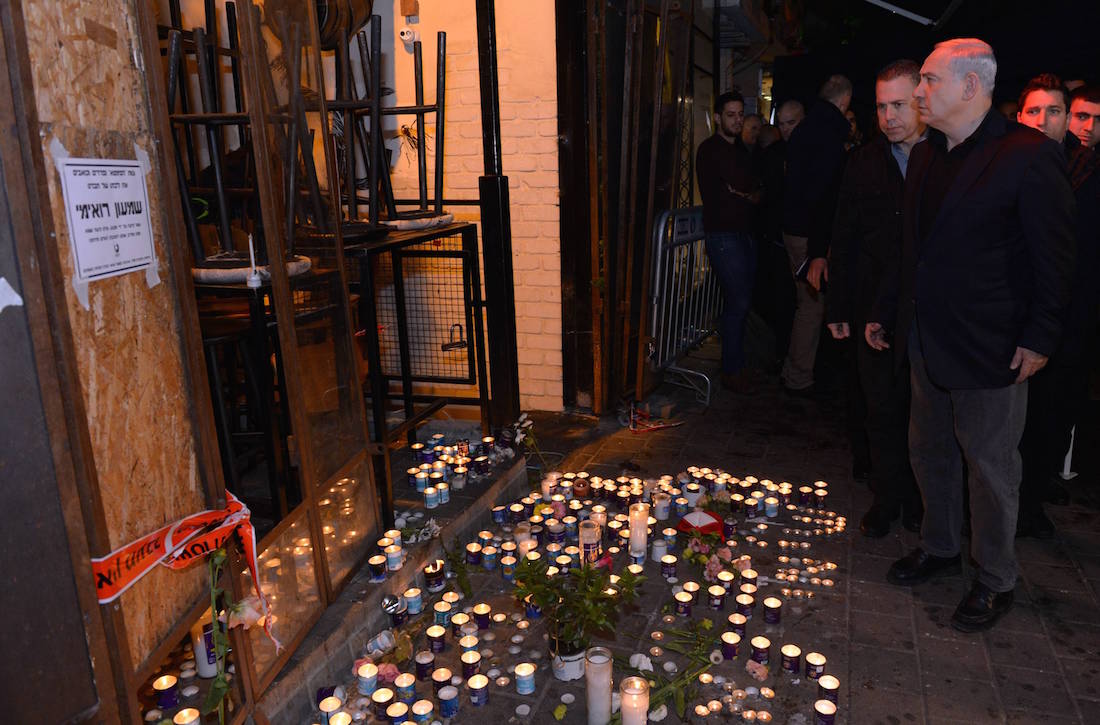 TEL AVIV (JTA) — When Prime Minister Benjamin Netanyahu spoke at the site of a deadly attack here the night after the shooting, his words were perceived by some as more offensive than comforting.

After expressing condolences to the families of the victims and welcoming condemnations from the Arab-Israeli community, the prime minister turned to a familiar theme.

“Among Israel’s Muslim citizens there are many elements that have come out against the violence and wish for full law enforcement in their communities,” Netanyahu said Saturday night in central Tel Aviv. “However, we all know that there is wild radical Islamic incitement against the State of Israel in the Arab sector. There is incitement in mosques, in the educational system and in social media.”

Netanyahu went on to outline his plans to “enforce the law” in Arab-majority areas and to eliminate the “two states of Israel” – one peaceful and law-abiding, the other rife with extremism and crime.

Some viewed the remarks as hypocritical – whatever lawlessness might exist in Arab-Israeli communities is a result of the government’s failure to direct adequate resources to law enforcement there, they say. Others saw his comments as an attempt to blame all Arab-Israelis for the actions of the alleged killer, Nashat Melhem, who may have suffered from drug and mental problems.

“You can’t take one crazy person and use him to paint an entire population in the colors of ISIS, just like you can’t blame the whole Jewish population for the burning of children in Duma,” said Nasreen Hadad Haj-Yahya, co-director of the Israeli Democracy Institute’s Project for Arab-Jewish Relations, referring to the West Bank town where Jewish extremists are suspected of killing three members of a Palestinian family over the summer.

Inequities between Jewish and Arab citizens are an issue of longstanding grievance in Israel. According to government figures, the average Arab municipal budget is 10 percent lower than that of the weakest Jewish municipalities. Arab-Israelis also lag in educational achievement, income and various other socioeconomic metrics.

“For the first time, the government of Israel is changing the allocation mechanisms in government ministries so that Israel’s Arab citizens will receive their relative share in the state budget,” Social Equality Minister Gila Gamliel said in a statement announcing the initiative.

In his speech Saturday, Netanyahu implicitly acknowledged the discrepancy, saying he had formulated a plan to increase law enforcement in the Arab sector, including more police stations and more officers. He also said Israel would “demand” loyalty to the law.

“Going back historically, the notion was that Arab communities can police themselves,” said Guy Ben-Porat, an expert at Ben-Gurion University on relations between police and minority communities. “But over the past few years these old ways are breaking up. Arab elders have no more power, and this is where the state has to intervene.”

It’s not clear to what degree this state of affairs may have led to the shooting by Melhem, 31, an Arab-Israeli who was still at large as of Tuesday. Melhem had a history of violence, serving jail time for assaulting an Israeli soldier. According to a relative, he was mentally unstable.

Violence by Arab-Israelis against Jews remains a relatively rare phenomenon, which partly accounts for the outrage at what some saw as Netanyahu’s charge of collective guilt. But even Haj-Yahya acknowledged a connection between the attack and the situation in the Arab-Israeli sector.

“It’s like a jungle,” she said. “Anyone can do whatever they want, without paying a price. The police don’t do anything about the proliferation of weapons in the Arab community because they don’t care if Arabs kill each other. Only once the Jewish community begins to pay a price, then the state cares.”