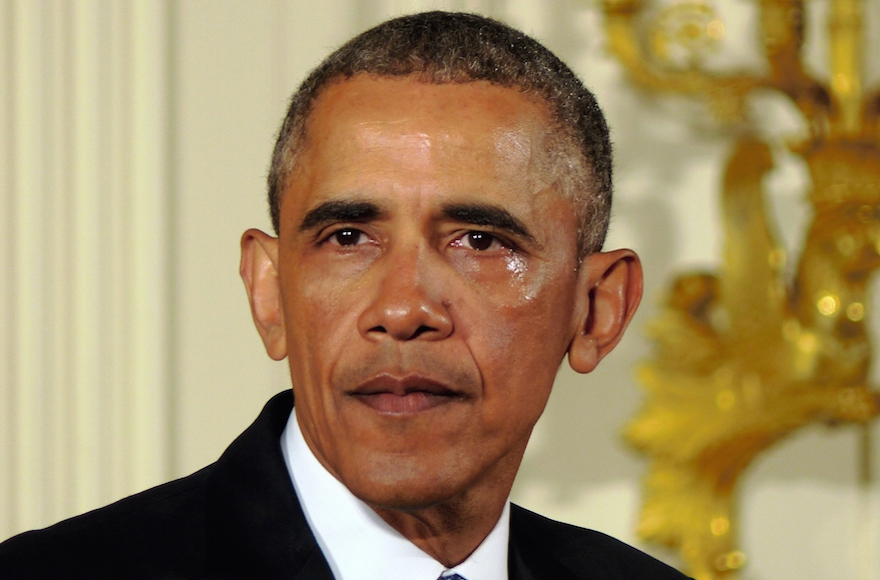 President Barack Obama shedding tears as he talks about the victims of the 2012 Sandy Hook Elementary School shooting and about his efforts to increase federal gun control in the East Room of the White House in Washington, D.C., Jan. 5, 2015. (The Asahi Shimbun via Getty Images)
Advertisement

On Tuesday, in an emotional White House address accompanied by victims of gun violence, Obama announced a series of measures that include broadening the definition of a business under existing gun control laws, addressing loopholes that allow some gun sellers to skirt background check requirements; making gun sellers more accountable for guns that are lost or stolen while in their possession; increasing support for the development of gun safety technology, and increasing funds for mental health.

“Today, background checks are required at gun stores — if a father wants to teach his daughter how to hunt, he can walk into a gun store, get a background check, purchase his weapon safely and responsibly,” Obama said. “The problem is some gun sellers have been operating under a different set of rules. A violent felon can buy the exact same weapon over the Internet with no background check, no questions asked.”

Representatives of the National Council of Jewish Women, Jewish Women International and the Jewish Council for Public Affairs, the umbrella body for Jewish public policy groups, were present at the announcement of the initiatives. They were among an array of groups including the Reform movement’s Religious Action Center and its Central Conference of American Rabbis that praised the actions.

With his executive actions, Obama is directing federal agencies to take the steps he proposed.

“These proposals are a step forward,” said Jared Feldman, the JCPA’s Washington director. “They are clearly insufficient to the magnitude of the problem. We’re going to need Congress to engage — and engage substantively — on these issues.”

Obama has failed to advance gun-control legislation through the Republican-led Congress. Republican leaders suggested in statements Tuesday that his actions were unconstitutional, and several of the party’s presidential candidates said they would roll back the actions as soon as they were elected.

The president wiped away tears as he recalled the 2012 massacre of first-graders in Newtown, Connecticut, by a lone gunman.

“Every time I think about those kids it gets me madder,” Obama said.

Among those on hand for the announcement was Gabrielle Giffords, the former Arizona congresswoman who survived a shooting attack in a Tucson suburb in 2011. Since then, the Jewish lawmaker has led advocacy for gun control.

The National Council of Jewish Women, which has been advocating for gun control since 1969, would continue to work on the state level, said its CEO, Nancy Kaufman.

“We still hold out hope the Congress will understand they need to do something,” she said, but added that the most effective route now seemed to be to advance background checks and gun trafficking on the state level.