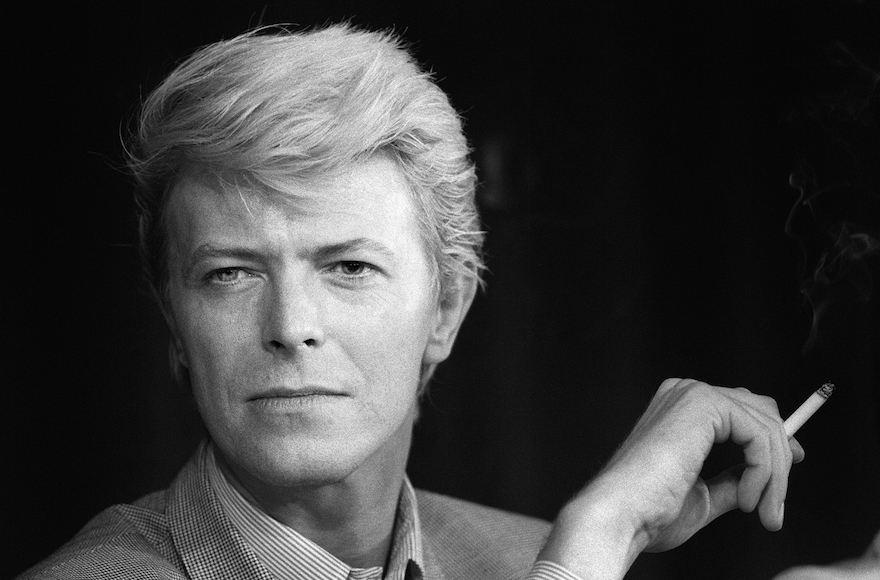 David Bowie at a press conference at the 36th Cannes Film Festival in Cannes, France, May 13, 1983. (Ralph Gatti/AFP/Getty Images)
Advertisement

It was clear long before the Internet swelled with heartfelt tributes to David Bowie that the late musician was an artistic legend. The 69-year-old Englishman, who died Sunday after an 18-month battle with cancer, reinvented himself countless times in a music career that spanned more than five decades. There were stints, too, as a Broadway and Hollywood actor.

From his Ziggy Stardust alter ego to his latest album — a jazzy, avant-garde rock release called “Blackstar” released just two days before his death — Bowie racked up some interesting Jewish connections. Below, we give you five of them.

1. He was into kabbalah, and sang about it.

“Here are we, one magical movement from kether to malkuth,” Bowie sang in his 1976 song “Station to Station.” “Kether” and “malkuth” are two of the 10 elements of the kabbalistic tree of life — the highest and lowest parts, respectively. Despite being high on cocaine for most of the “Station to Station” album’s recording process and describing it years later as the work of “an entirely different person,” Bowie was fascinated with kabbalah during this period (decades before Madonna made it cool). The back cover of the “Station to Station” album features Bowie drawing the kabbalistic tree of life in chalk.

2. His first manager was Jewish.

Les Conn, born to a Jewish family in Stamford Hill, a traditionally Jewish part of London, failed to make much headway in the music business before connecting with the 17-year-old Bowie — then still going by his birth name, David Robert Jones — in 1964 through a mutual acquaintance, washing machine magnate John Bloom. Conn managed to get Jones’ first band some gigs, but he couldn’t sell his talent to The Beatles’ publisher, Dick James. When Conn’s contract with Jones expired, the rocker left for a new band and changed his name to Bowie — and the rest is history.

3. He was close to Jewish rockers Lou Reed and Marc Bolan (in different ways).

Bowie connected with Lou Reed, of the Velvet Underground, and pop artist Andy Warhol on a trip to the United States in 1971. He later produced Reed’s breakthrough solo album “Transformer” in 1972. When Reed died in 2013, Bowie called him “a master.”

Marc Bolan, lead singer of the glam rock band T-Rex, had a more complicated and competitive relationship with Bowie. The two teenagers became close friends early on in their careers when they were both managed by Conn.

Tension ensued when Bolan (who was born Mark Feld and ate Jewish soul food after concerts) found success years before Bowie did. But Bolan’s producer, Tony Visconti, eventually began devoting more of his time and energy to Bowie’s albums, which began climbing the charts as Bolan went downhill into alcohol and drug addiction. Nevertheless, according to the Daily Mail, after Bolan died in a 1977 car crash at 29, Bowie quietly gave financial support to Bolan’s wife and son.

4. He went through a bit of a Nazi phase.

In a drug-induced state leading up to the release of “Station to Station,” Bowie was criticized for saying in an interview that Adolf Hitler was “one of the first rock stars.” In the same month, he said Britain could “benefit from a fascist leader.”

Bowie later assumed a persona called the “Thin White Duke,” which has been described as an “emotionless Aryan superman.” In 1976, he drove up to London’s Victoria Station in a Mercedes convertible and gave what was reported to be a Nazi salute. Bowie denied the reports and later attributed his behavior to the copious amounts of drugs he was taking at the time.

5. He performed in Israel during one of the happiest stages of his life.

“I think I would have to be squeezed real hard to be happier,” Bowie said in 1996, fresh off a performance at Hayarkon Park in Tel Aviv. In a series of videos, Bowie said he and his band were in the midst of one of the best tours of his life. He had recently released the experimental album “Outside” and had several other creative projects in the works. “I’ve been trying to go here for years,” he said in one of the videos with a smile shortly after getting off his plane.