In his final State of the Union, Obama pleads for multilateralism 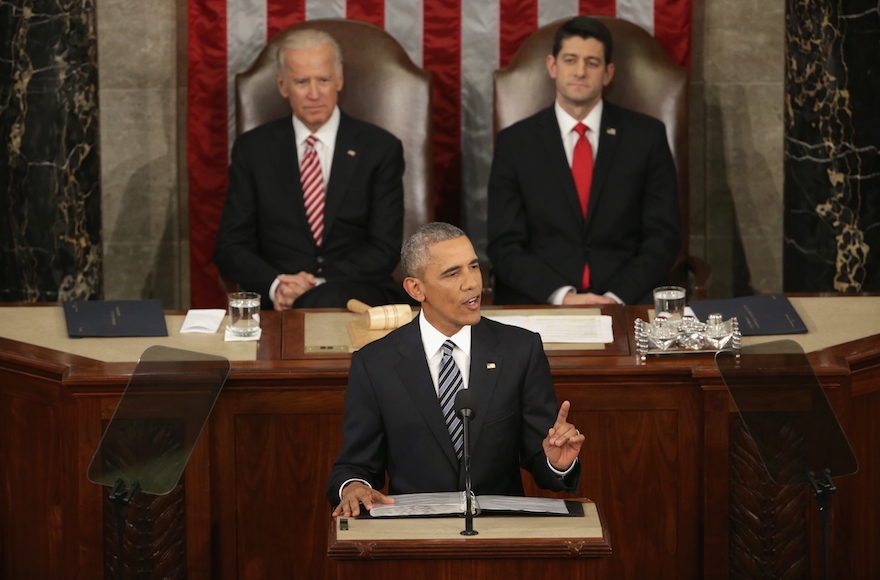 President Barack Obama delivering the State of the Union speech before members of Congress in the House of Representatives in Washington, D.C., Jan. 12, 2016. (Alex Wong/Getty Images)
Advertisement

WASHINGTON (JTA) — President Barack Obama in his final State of the Union address called on the United States to sustain a foreign policy that emphasized multilateralism after his presidency ends.

Obama devoted a significant chunk of his speech Tuesday night to defending his insistence throughout his presidency on building alliances, although he said he has been ready to go it alone when necessary.

“The third big question we have to answer is how to keep America safe and strong without either isolating ourselves or trying to nation-build everywhere there’s a problem,” Obama said, having outlined four major challenges for his final year in office and the years beyond: addressing poverty, using technology to advance cures for disease and mitigate climate change, keeping America safe and tamping down political polarization at home.

He cited the Iraq War launched under his predecessor George W. Bush as an example of a policy that weakens the United States.

We “can’t try to take over and rebuild every country that falls into crisis,” Obama said. “That’s not leadership; that’s a recipe for quagmire, spilling American blood and treasure that ultimately weakens us. It’s the lesson of Vietnam, of Iraq  —  and we should have learned it by now.”

Instead, Obama said, he favors a foreign policy that “says America will always act, alone if necessary, to protect our people and our allies; but on issues of global concern, we will mobilize the world to work with us, and make sure other countries pull their own weight.” 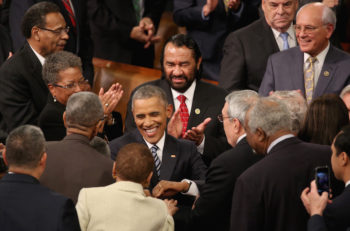 President Obama shaking hands with members of Congress as he arrives to deliver his State of the Union speech in the House of Representatives in Washington, D.C., Jan. 12, 2016. (Mark Wilson/Getty Images)

He cited as an example last year’s sanctions relief for nuclear restrictions deal between Iran and six major powers. Obama engaged in a bitter battle with Republicans and Israel’s government until he succeeded in keeping Congress from killing the deal.

“That’s why we built a global coalition, with sanctions and principled diplomacy, to prevent a nuclear-armed Iran,” the president said. “As we speak, Iran has rolled back its nuclear program, shipped out its uranium stockpile and the world has avoided another war.”

Obama did not mention the 10 American sailors captured Tuesday by the Iranian Navy after two small U.S. naval vessels entered Iranian waters. Critics of the nuclear deal say that while Iran is complying with its narrow strictures, it is also expanding its influence and mischief-making in the region.

“The president touted his nuclear deal with Tehran, yet what the President didn’t say is that, since the deal, we have seen an increasingly bellicose regime flouting the international community, daring us to take action against its illicit behavior and then threatening to walk away from the nuclear deal if we do respond,” Rep. Ileana Ros-Lehtinen, R-Fla., the chairwoman of the House Middle East subcommittee, said in a statement.

“We would make agreements that were celebrated in Israel and protested in Iran and not the other way around,” she said.

“Masses of fighters on the back of pickup trucks and twisted souls plotting in apartments or garages pose an enormous danger to civilians and must be stopped,” he said. “But they do not threaten our national existence. That’s the story ISIL wants to tell; that’s the kind of propaganda they use to recruit.”

Obama called on Congress to authorize the use of force against the Islamic State, which is also known as ISIS or ISIL, but said he would continue to target the group with airstrikes.

He called on Americans not to generalize about Muslims, alluding to calls by Republican presidential hopeful Donald Trump to ban them from entering the United States.

“When politicians insult Muslims, when a mosque is vandalized, or a kid bullied, that doesn’t make us safer,” he said. “That’s not telling it like it is. It’s just wrong. It diminishes us in the eyes of the world. It makes it harder to achieve our goals. It betrays who we are as a country.”

Haley, who has attacked Trump’s rhetoric, also called for tamping down corrosive rhetoric.

“It can be tempting to follow the siren call of the angriest voices — we must resist that temptation,” she said. “There is a tendency to falsely equate noise with results.”

Democrats in the chamber of the U.S. House of Representatives, where Obama delivered the address, stood in applause at the call not to stigmatize Muslims, while Republicans remained seated.

At least 20 Democrats invited Muslims as guests to the speech, CNN reported. Among the Democrats were Jewish lawmakers Rep. Debbie Wasserman Schultz, D-Fla., the chairwoman of the Democratic National Committee, and Sen. Al Franken, D-Minn.

Also present was former Rep. Gabrielle Giffords, a Jewish Democrat from Arizona who was shot in an assassination attempt in 2011. Giffords was at Obama’s side earlier this month when the president introduced executive actions that would toughen existing background checks for gun purchasers.