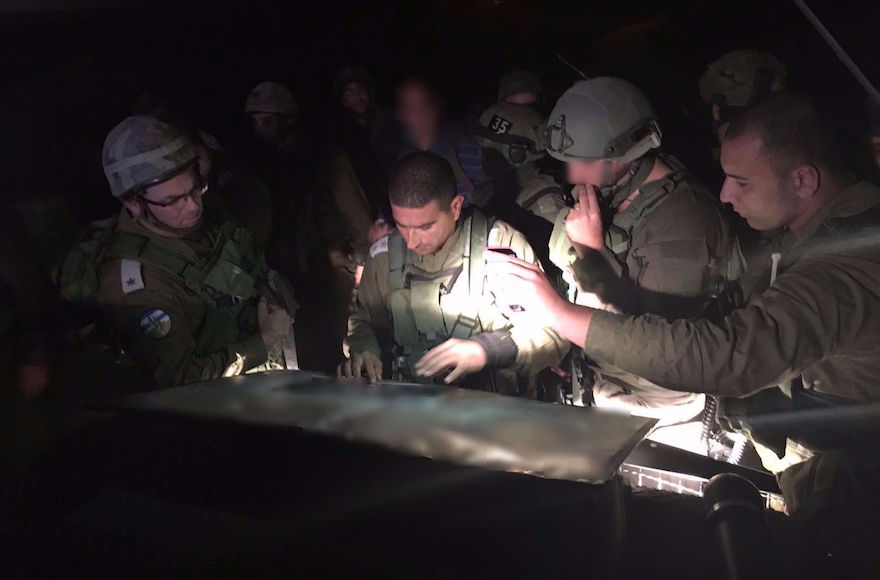 Israeli security forces searching at the scene of a fatal stabbing of a Jewish woman in her 30s in the West Bank settlement of Otniel. (IDF Spokesperson/Flash90)
Advertisement

JERUSALEM (JTA) — A Jewish Israeli woman in her 30s was stabbed to death inside her home in the West Bank settlement of Otniel, near Hebron.

The Israel Defense Forces and police are investigating the murder late Sunday afternoon as a terrorist attack. The woman was later identified as 39-year-old Daphne Meir. Three of her six children reportedly were home at the time of the attack, during which Meir reportedly struggled with her attacker for several minutes.

The IDF said in a statement that a “terrorist” broke into the woman’s home and stabbed her to death. Security forces are searching for the assailant and have set up checkpoints in that area of the West Bank.

The IDF called on residents of the area to remain in their homes on Sunday evening and lock their doors and windows.

Paramedics said they found the woman unconscious and without a pulse. They attempted to resuscitate her but were unsuccessful and declared her dead at the scene, Magen David Adom said.

Rabbi Yaakov Litman and his 18-year-old son, Netanel, were killed in November in a Palestinian shooting attack near Otniel as they drove in a car with five other family members to the pre-wedding celebrations of Litman’s daughter.

Also on Sunday, a Palestinian assailant was shot and killed as he attempted to stab a soldier near the Samaria Regional Brigade headquarters outside of Nablus.