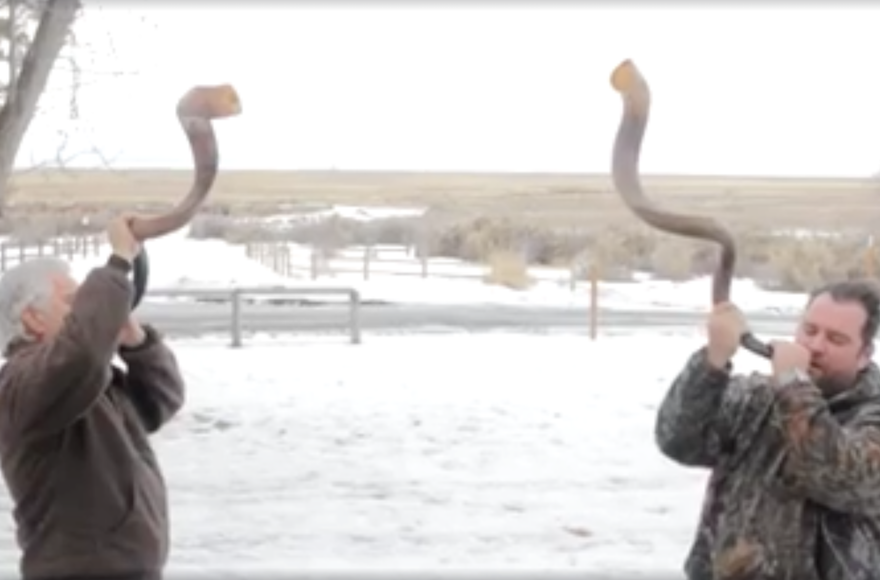 Militants blowing shofars in the Malheur National Wildlife Refuge in Burn, Oregon, in a Facebook video posted on Jan. 17, 2016. (Screenshot from Facebook)
Advertisement

Hold onto your 10-gallon hats — and your shofars — the standoff in Burns, Oregon, just got a little bit Jewish.

For more than two weeks, several dozen armed men have occupied the Malheur National Wildlife Refuge in protest of the prison sentences given to Dwight and Steven Hammond for committing arson. The militants, many of whom belong to various unofficial citizen militias, also want to bring attention to the “tyrannical” management of federal land.

On Sunday, Blaine Cooper — one of the leaders of the standoff with the federal government and the head of an informal citizen militia in Arizona — uploaded a video to Facebook showing two of the militants blowing what any Jew would recognize as serious shofars.

“CHRISTIANS THE BATTLE TRUMPET HAS BEEN SOUNDED TIME TO RISE!” Cooper wrote in the caption. “CALL TO ACTION SEND IN THE TROOPS TO STAND WITH US IN BURNS OREGON!”

The guys in the video don’t nail the tekiah gedolah blasts heard in synagogues on Rosh Hashanah. But they get an A for anarchistic effort.

The militia is led by Ammon Bundy, whose father Cliven Bundy led a similar month-long standoff of his own against the U.S. Bureau of Land Management.

SHARE UPDATE BURNS OREGON! CHRISTIANS THE BATTLE TRUMPET HAS BEEN SOUNDED TIME TO RISE! CALL TO ACTION SEND IN THE TROOPS TO STAND WITH US IN BURNS OREGON!