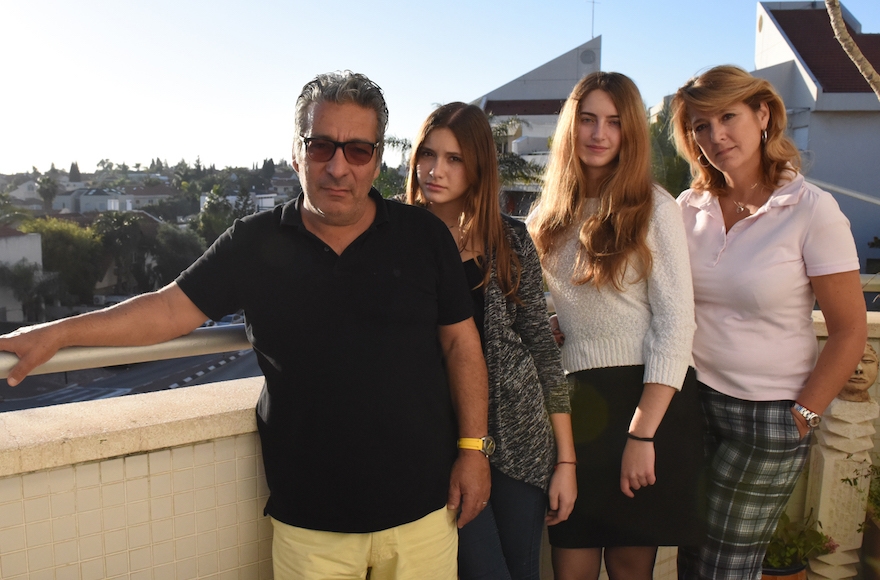 Catherine Berdah, right, with her husband and daughters in their apartment in Ra'anana, Israel. (Cnaan Liphshiz)
Advertisement

RAANANA, Israel (JTA) – Before she traded her native France for Israel, Catherine Berdah ran a successful drug store in an affluent suburb on the eastern edge of Paris.

A 50-year-old pharmacist with a master’s degree in business and decades of experience, Berdah earned over $6,000 per month and presided over an expanding business with 14 employees. But Berdah sold out last year and moved with her husband and two teenage daughters to this central Israeli city because she feared for their future in France amid rising anti-Semitic violence.

Berdah hoped to build a new pharmacy business in the Jewish state. But six months after settling here, she has already quit a $6-per-hour job as a cashier that offered no prospect of advancement and another in a health clinic where she was told to stack boxes in a storage room. Berdah left the latter because she was unable to lift the boxes.

“At 50, I was told that lifting boxes was basically all I’m good for,” Berdah said. “That’s when I started to feel humiliated.”

Now Berdah is studying Hebrew and waiting to take an exam that will grant her an Israeli pharmacist’s license. But before she can do that, she must meet a range of demands, including that she produce her attendance log from a pharmacology internship she completed 30 years ago with a French pharmacist who is no longer alive. According to Qualita, an umbrella group of 12 French immigrant associations in Israel, the exam has an 80 percent fail rate.

All of which has Berdah wondering if she made a terrible mistake in uprooting her comfortable life in France for a chance at a better one in Israel.

“I’m going to give it another year,” Berdah said. “But it’s not going too well.”

Some 15,000 French Jews have settled in Israel in the past two years alone, driven here by a combination of rising anti-Semitism and economic stagnation, among other factors. But while their impact is felt everywhere from the opening of multiple kosher patisseries to the launch last year of a French-language kindergarten to the sounds of yarmulke-wearing boys imitating their favorite French movie stars in Raanana’s Yad L’Banim Square, Israel’s Francophone newcomers are struggling to make economic inroads.

Their plight recalls that of Russian immigrants who arrived in Israel in the 1990s, many of them highly trained professionals with advanced degrees forced to work low-skill jobs as garbage collectors and street sweepers because their credentials did not transfer.

“French physicians, nurses and pharmacists who’ve studied for five, eight years won’t work here as sanitary workers like their Russian counterparts did in the 1990s,” said Mickael Bensadoun, the director of Qualita. “They’re Zionist, but there’s a limit. And if it comes to that, they’ll return to France or move to countries hungry for skilled newcomers, like Canada.”

Both Bensadoun and Berdah believe Israeli authorities have presented unnecessary obstacles to protect local professionals from immigrant competition. The Israeli Health Ministry declined to respond to the charge and referred all inquiries to the Ministry for Immigrant Absorption, which told JTA that efforts are underway to smooth out the certification process for health care professionals.

“We represent a boon for Israel, please don’t put us through a bureaucratic hell for this desire,” David Tibi, a dentist who immigrated to Israel in 2014, wrote in a letter last month to Israeli Prime Minister Benjamin Netanyahu.

In the meantime, French immigrants are taking matters into their own hands. In 2014, they launched an aggressive lobbying effort to break through the bureaucratic tangles they fault for making absorption exceedingly difficult for those already in Israel, while deterring countless others from coming.

The lobbying, led by Qualita and its member organizations, has already led to some changes, including the easing of certification requirements for French physicians in 2014 and pending legislation that would exempt experienced French dentists from taking a certification exam. Other professionals still must undergo thorough testing to work, regardless of their experience or the French standards they meet.

Last month, the lobbying effort received a big push from Meyer Habib, a Jewish member of France’s National Assembly and friend of Netanyahu, who declared he would advise French Jews against moving to Israel unless progress is made within three months.

“I cannot support a situation which creates tragedies in people’s lives,” Habib wrote on Facebook.

According to Bensadoun, some 300-400 French health care professionals cannot work in their chosen field because of certification issues. He also pointed to official figures suggesting that the situation is leading 15-20 percent of French immigrants to return to France within two years.

Still, Bensadoun says he is optimistic, partly because of lessons drawn from the trials of Russian immigrants in the 1990s.

“The Russian olim’s success and immense contribution to Israel’s rise as a start-up nation have created an awareness in the Knesset and public of the potential dividends from educated olim,” said Bensadoun, using the Hebrew word for immigrants. “In a way, we’re sailing in their wake.”

For all her troubles, Berdah is not quite ready to give up on Israel. But the situation has put strains on her marriage. Her husband, Michel, wants the family to return.

“You think you have something to offer here?” Michel says as they argue on the subject. “Israel doesn’t want anything from you.”

Berdah, in turn, has her own disagreements with her oldest daughter, Clara, 18, who wants to stay in Israel and – to Berdah’s chagrin – serve in an army combat unit. Her younger daughter, Naomi, has acclimated well at her high school, where she studies in a special class for new immigrants and is considering starting a modeling career.

“The silver lining here is that the girls are really fitting in,” Berdah said. “It makes me wonder whether Israel really wants us or only our children.”