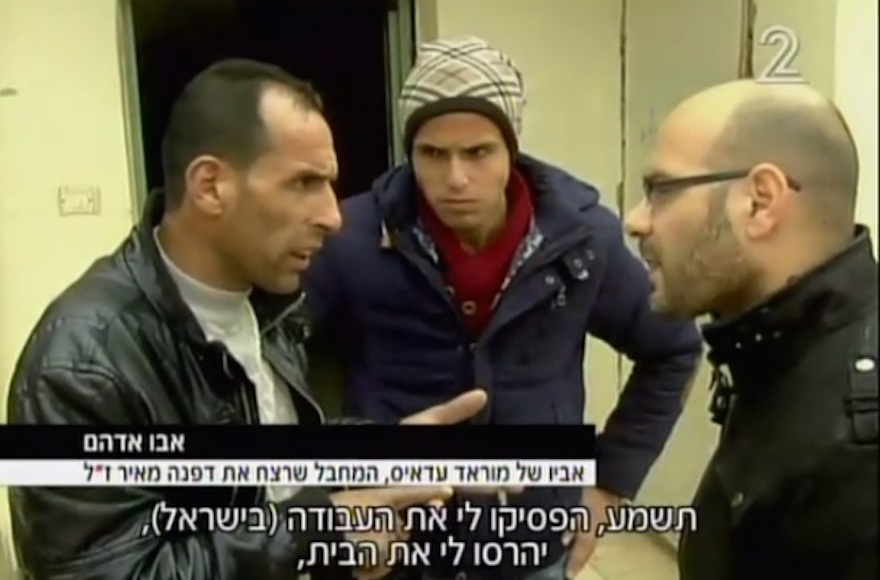 Abu Adham, left, the father of the Palestinian teen arrested on suspicion of killing Dafna Meir in her home. (Screenshot from Channel 2)
Advertisement

(JTA) — The father of the Palestinian teen accused of fatally stabbing an Israeli woman in a West Bank settlement said his family’s home should not be demolished because it’s “very possible” that if he’d known of his son’s guilt, he would have turned the boy in to Israeli officials.

Abu Adham, whose son Morad Bader Abdullah Adais was arrested Monday night and charged with murdering Dafna Meir in her home in the Otniel settlement near Hebron, asked in an interview Tuesday on Israel’s Channel 2, “Why should I be punished for what the kid did?”

Adham said in the interview, according to The Times of Israel, that his son, who reportedly confessed to murdering the mother of six, had not acted suspiciously.

According to the Times of Israel, the Israeli news site Walla reported Tuesday that Adham told the Palestinian media he was “proud” of his son for stabbing Meir, but other family members disputed that account, telling Channel 2, “No one here is proud of the murder.”