On Tu b’Shvat, seeds of growth and change in our seder and beyond 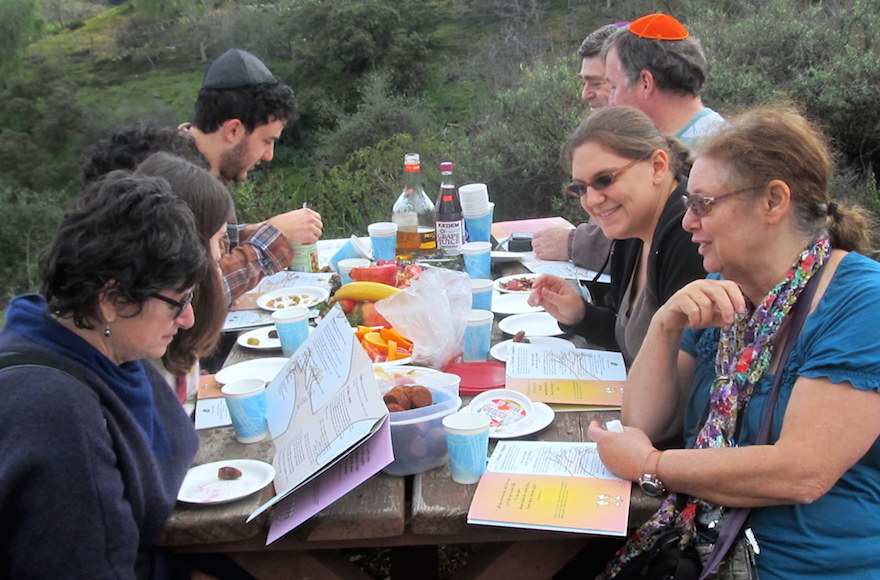 LOS ANGELES (JTA) — For the last three years, I’ve celebrated Tu b’Shvat — the Jewish New Year of the Trees — by organizing a participatory seder in a nearby canyon-top park.

The seder usually includes about 10 to 15 people from my group, the Movable Minyan — a small, lay-led, independent congregation that needs every member’s active participation in order to thrive. We meet in the parking lot, and from there, bags of seder supplies in hand, we take a short hike up past oak trees to a chaparral-covered hill with a panoramic view of the San Fernando Valley.

This is no ordinary picnic. For the seder, in addition to plates, cups and Haggadahs to explain everything (what Jewish event would be complete without a book?), you need two different colors of wine or juice — the change in color representing the changes in season.

We also bring specific fruits, each representing one of the four levels of existence that the kabbalists of Safed, who created the seder, taught that we live on simultaneously: “assiyah,” doing; “yetzirah,” formation; “briyah,” creation, and “atzilut,” nobility. (Assiyah, for example, includes actions like repairing the world. It’s represented by foods with a tough outer shell and a soft inside, like walnuts or pomegranates, which symbolize our physical exteriors and our inner spiritual lives.)

My part, aside from bringing a bag of kumquats from a tree in our yard — representing creation, which calls for fruit that can be eaten whole —has been to lead the seder. It’s not too hard, considering we have an easy-to-use Haggadah called “Branching Out,” published by the Jewish National Fund. But with the New Year of the Trees fast approaching — this year it’s celebrated on Jan. 25 — the Haggadah was becoming the same old fruit salad.

Inspired by the trees, I thought it was time to show a little growth in my Tu b’Shvat celebration. Even though there’s been so little rain in Southern California, the trees continued to grow — I wanted to see growth in our minyan as well. Yes, a few more people would be nice. But, more significantly, I wanted to find a way to better appreciate what each member brought to the table both at the seder itself and, more broadly, to our year-round community.

READ: The country’s tastiest chicken will soon be kosher

While attending the Federations of North America’s General Assembly last November, I was handed a book called the “Tu B’Shvat Companion” at a booth sponsored by Livnot U’Lehibanot. The Israel-based organization (which means “to build and to be built”) seeks to inspire young Jews — and, apparently, older people like me — to “explore their heritage and spirituality.” I had slipped the softcover in my bag, and there it remained until I started thinking about the Tu b’Shvat approach.

“Today, we start our feast with seven species [shivat haminin], which are the fruits that the Land of Israel is famous for,” the chapter about the seder began. My Haggadah also mentioned them: barley, dates, figs, grapes, olives, pomegranates and wheat. A woman who comes to my seder every year bakes her signature “seven species muffins,” which are surprisingly good considering that the list of ingredients sounds like something from a TV cooking competition.

Still, I thought the seven species could provide a rich metaphor for our indie group, and I hoped find another, non-gastronomical way to relate to them.

Reading the “Companion” (available free online), I learned the date, for example, demonstrated that the Jewish value of “inclusiveness” can be “extracted from the palm tree.” 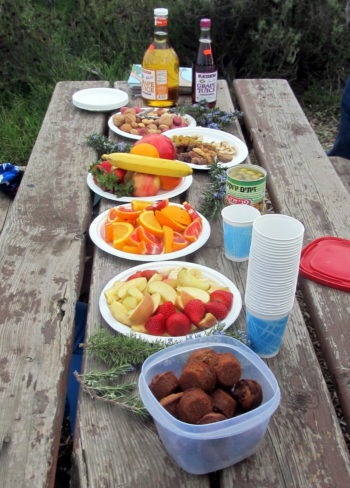 “The palm tree has nothing wasted from it,” the Haggadah notes. The dates are eaten; young, unopened branches are used at Sukkot for the lulav; the trunk fibers are “used to make rope.” Similar to the palm tree, concluded this “mini-drash” on trees and people, “the people of Israel have no person wasted.”

As I read, the myriad personal and communal connections to Tu b’Shvat began to flower.

Each of the seven species was presented with “spiritual insights,” something our congregation strives for in our Torah discussions. There were also open-ended questions like, “What in your opinion is the best way to be connected to the continuity of our people’s heritage without losing our personal uniqueness?”

The more I read, the more the Haggadah seemed to be talking to my minyan. Each of the species was presented in the context of a physical and spiritual connection: The olive tree, for example, has multiple trunks, like a family.

After all, at nearly 30 years old, our minyan was a kind of family, with each member keenly aware of others’ growth and setbacks over the years. With our backgrounds varying from secular to Orthodox, our diversity was our strength — though sometimes it resulted in intense debate over the group’s course.

Moved by this reverie of connectedness — and awakening to the possibilities a new depth of meaning of Tu b’Shvat for our group — I felt compelled to connect with the book’s author, Shlomo Tal.

Tal spoke with me from Safed, where Livnot U’Lehibanot is based, and where the custom of a Tu b’Shvat seder began more than 300 years ago. He asked me, when I looked at the Tu b’Shvat seder table, “Which fruit smiles at you?”

READ: Pomegranate juice a vehicle for Hasidic help and healing

At first, the question brought to mind the old California Raisins commercials. But then I realized he was asking which fruit I would like to eat first.

For me, that “smiling fruit” was the pomegranate — and for Tal as well. For him, the ruddy fruit with an unexpected interior represented the “ability to see beyond” the outer covering. The pomegranate suggested to him a way to look past the “bitter rind” of some people that we must “unpeel in order to discover” the sweetness inside.

For Tal, the seven species are a way to remind us that community consists of many different kinds of people, each with something to give.

Inspired by our conversation, I considered each of the seven species. I realized how, in addition to being an earthy bond with Israel, they could foster an organic connection to diaspora communities — even in L.A., which is so dispersed that it’s almost a diaspora within a diaspora.

It’s with this seed of insight that I hope to grow our Tu b’Shvat seder and our grassroots community.