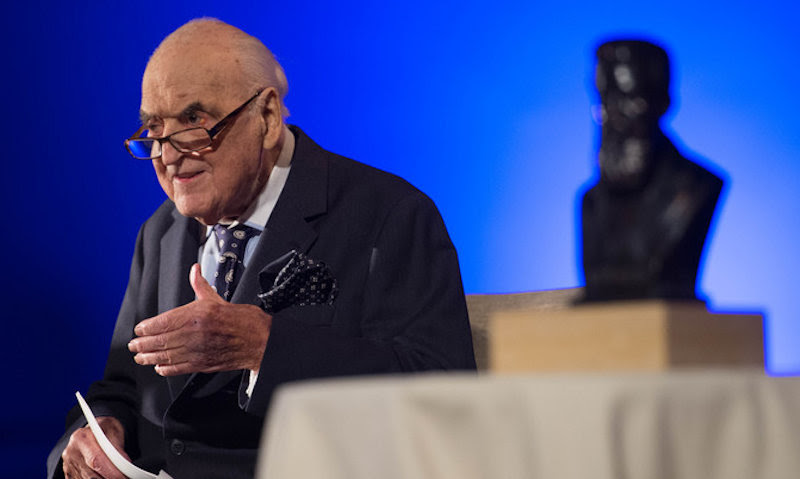 Weidenfeld died in his sleep on Wednesday morning following a brief illness and is expected to be buried in Israel, the London Jewish Chronicle reported.

British Chief Rabbi Ephraim Mirvis described Weidenfeld as “a towering figure in the Jewish community whose legacy will be one of great compassion.”

Born in Vienna in 1919, Weidenfeld was, according to the New York Times, raised in a “cultured and cosmopolitan household.” Citing British author-journalist Nigel Farndale, the Times said that as a young adult Weidenfeld earned “a reputation as a womanizer and a duelist, in one instance fighting a Nazi sympathizer for the honor of his Jewish fraternity.”

Weidenfeld immigrated penniless to London in the aftermath of the Anschluss, or Nazi annexation of Austria. In 1948, he co-founded the publishing company, Weidenfeld & Nicolson, which the Jewish Chronicle said published Vladimir Nabokov’s “Lolita,” as well as memoirs by Israeli Prime Ministers Golda Meir and Yitzhak Rabin.

In 1949, Weidenfeld spent a year as chief of staff to Israel’s first president, Chaim Weizmann, according to the World Jewish Congress, where he served as honorary vice president. He was knighted in 1969.

“I can’t save the world … but I had a debt to repay,” he said at the time. “It was Quakers and Christians who brought those [Kindertransport] children to England. It was a very high-minded operation, and we Jews should also be thankful and do something for the endangered Christians.”

Weidenfeld had honorary doctorates from several British universities, including Oxford.

In a statement, World Jewish Congress President Ronald Lauder said Weidenfeld was “one of the most inspiring figures of the 20th century.”

Lauder described Weidenfeld as “a committed philanthropist, an advocate of the Jewish people and a life-long Zionist who always defended Israel against attacks and unfair criticism.”

Former British Chief Rabbi Jonathan Sacks said: “George Weidenfeld was so much larger than life, and so inexhaustible in energy, that it is hard to believe he is no longer with us.”

“He was always thinking of new ways to fight prejudice, heal ancient wounds and bring peace to troubled regions of the world,” Sacks added.