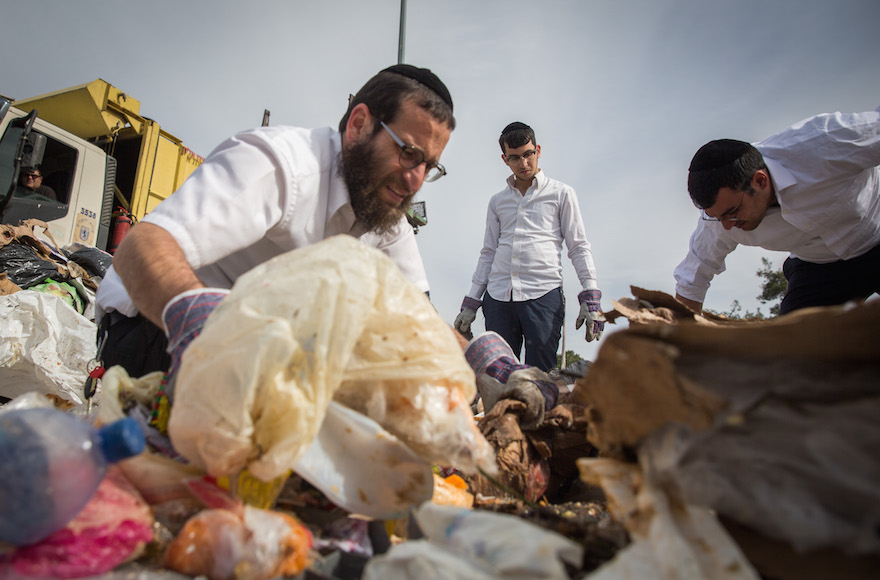 JERUSALEM (JTA) — A diamond engagement ring accidentally thrown in a garbage dumpster by a bride-to-be was recovered days after haredi Orthodox volunteers sifted through tons of garbage.

On Sunday, an elderly Jerusalem man came forward with the ring, which  reportedly is worth more than $10,000. He told the Israeli media that he found the ring on the ground on Thursday — the day it was lost in the haredi community of Geula in Jerusalem, when it was accidentally emptied into a home garbage receptacle and then into a municipal dumpster.

The man said he put the ring away for safekeeping, intending to deal with it after the weekend. He did not know about the search for a ring matching its description until Saturday night after Shabbat.

The family offered a $300 reward to anyone who found and returned the ring.

Contacted by the family after the ring was lost, the Jerusalem municipality had instructed the driver to unload the truck’s contents near the city’s designated waste disposal site. By that time, the family had recruited the volunteers who sifted through more than two tons of garbage for hours, but were unable to locate the ring. Smaller searches were conducted around the container to rule out the possibility that the ring was in a number of garbage bags that did not make it into the truck that morning.

Meanwhile, the truck’s waste compartment and its mechanism were taken apart at a municipal auto service point and inspected, but the ring was not found in the truck, either.

On Friday, the family called off the search after the volunteers returned the checked garbage to the municipal garbage container that had been emptied into the truck earlier Thursday.

The bride is to be married next month.