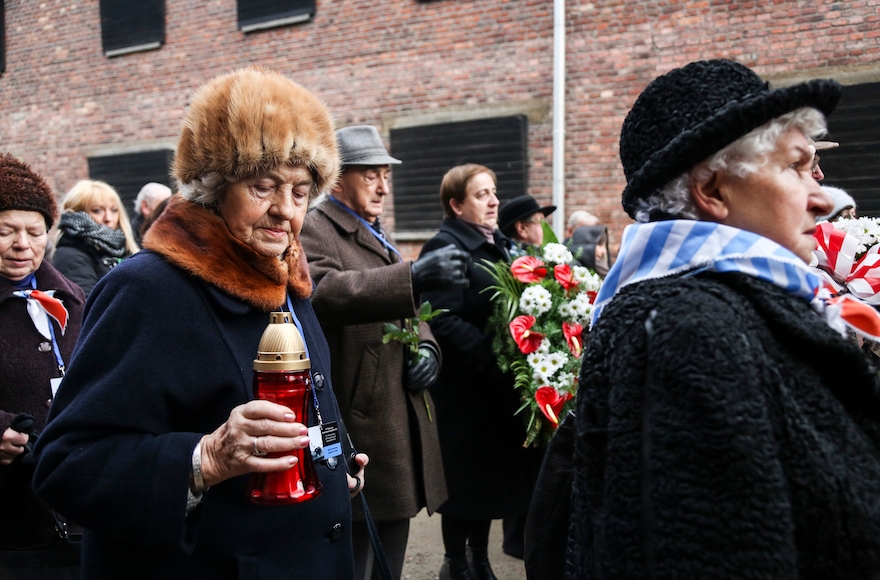 UPDATE: This article was last updated at 5:30 p.m. Wednesday to include more details about the Auschwitz ceremony.

WARSAW (JTA) — More than 80 former Auschwitz prisoners marked the 71st anniversary of their liberation during a ceremony at the Nazi death camp on International Holocaust Remembrance Day.

The Holocaust survivors gathered Wednesday at the camp, now a memorial and museum, in southern Poland, many carrying flowers. The ceremony there included speeches by Presidents Andrzej Duda of Poland and Kolinda Grabar-Kitarović of Croatia.

International Holocaust Remembrance Day is observed on Jan. 27, the anniversary of the Auschwitz liberation by the Soviet army.

At the commemoration, Duda emphasized that Auschwitz is “not just a museum” and “not just a big grave,” but a case study of  “what may happen if international law is violated, and the international community does not respond on time” and “what can happen if some states behave aggressively towards the others, if they take over their territories. If they spread war and hatred.

During a ceremony Wednesday at the European Parliament to mark the day, the parliament’s president said “it hurts that in today’s Europe Jews again live in fear.”

“It is unacceptable that Jews are reluctant to wear their traditional clothes and display religious symbols in the public because of fear of reprisals and aggression,” Martin Schultz said. “It is saddening when Jewish people consider leaving Europe because they no longer feel safe.

“Jewish friends and neighbors, we stand with you against those who seek to harm you. We will never let them make you outsiders in your own country. Europe is your home today, tomorrow and forever.”

European Jewish Congress President Moshe Kantor told the European Parliament that the governments of its member states should do more to protect their Jewish citizens.

“We are not asking for any special favors as Jews, we are asking for governments to fulfill their responsibilities towards us as European citizens,” Kantor said. “We ask for the same rights to life, security and safety as any other European.”

At the Auschwitz ceremony, survivor Halina Brzozowska-Zdunczyk described being transported to the Nazi camp at the age of 12 and her memories of liberation.

“Suddenly, very young soldiers went inside the barrack, screaming and shouting,” she recalled. “They were wearing different uniforms – green, woolen, thick ones. They said that they were Russians and that we were free. After a second they tried to start feeding us. And there was lard, pork scratchings and wholemeal bread to eat.”

She said the entire area around the barrack, its entrances and roads where covered with people lying there, extremely emaciated, dying, begging for help or dead.

Later Wednesday, President Barack Obama was expected to speak at a ceremony honoring Righteous Among the Nations at the Israeli Embassy in Washington, D.C.