For Orlando vacations, kosher food easy to find at Disney 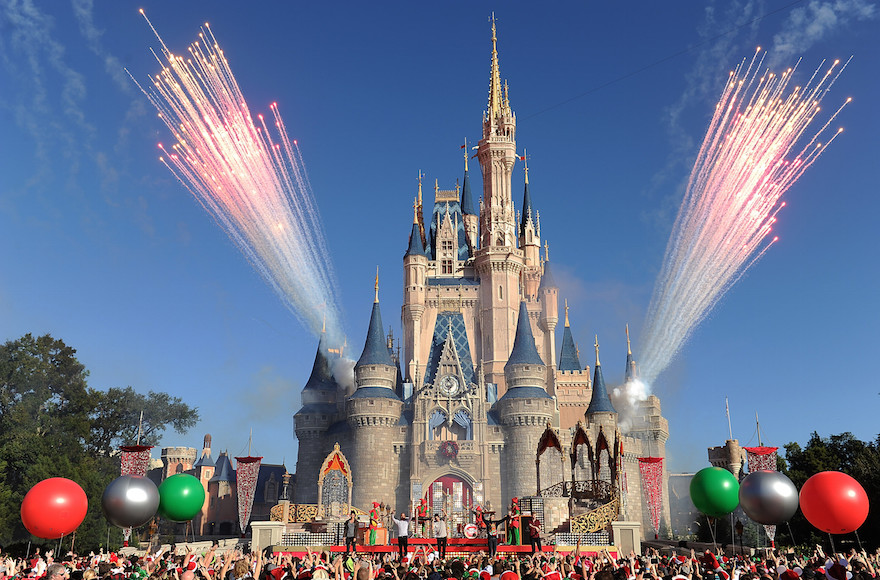 ORLANDO, Fla. (JTA) – As any religiously observant Jew knows, going on vacation can take a lot of work.

Aside from the customary preparations, there are the added complications of organizing kosher food and Shabbat logistics. Many kosher tourists spend days before trips precooking meals to freeze and bring along, to say nothing of figuring out once at their destination how to heat food on Shabbat and avoid using electronic hotel key cards.

So when my editor heard about a new kosher kitchen opening at the Rosen Plaza Hotel in this central Florida city, and asked me if I’d be willing to fly to the warmer climes in mid-January to write about doing a kosher vacation in Disney town — sans pre-cooking — it didn’t take much persuading.

I had gone on assignment to Gaza, rural Ethiopia and eastern Ukraine. Yeah, I figured I could handle Orlando with the kids in tow.

Here’s what I found: 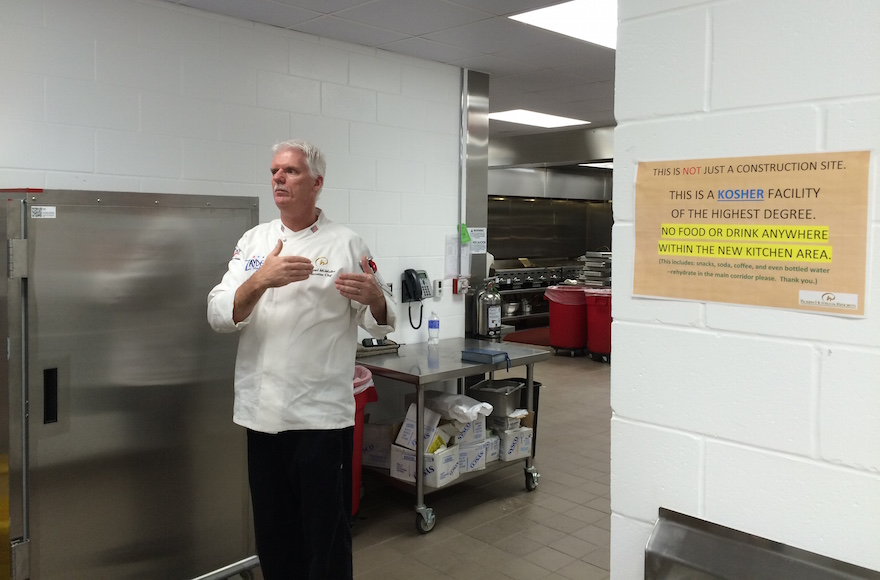 The new $2 million, 5,000-square-foot kosher kitchen that opened in mid-January at the Rosen Plaza Hotel is the first of its kind in America, according to Rabbi Leonard Steinberg of the Orthodox Union’s kosher division.

A few other U.S. hotels have kosher kitchens, but they are typically used only for special events or Jewish holidays. In fact, most hotels that host kosher events don’t have a kosher kitchen at all. Instead, they temporarily kosherize their regular kitchens, which afterward revert to non-kosher.

That’s what the Rosen Plaza Hotel here used to do until its founder and president, Harris Rosen, decided a year ago he wanted a permanent kosher kitchen.

After months of construction and consulting on kosher specifications with the O.U. and the Rabbinate of Central Florida, the hotel technically has three: meat, dairy and pareve. Open all year, Zayde’s Kosher Kitchen allows guests to order even a single meal to eat in any of the hotel’s restaurants or their room. The hotel also offers freshly made $10 packaged meals in the lobby mini-market, such as pastrami, egg salad sandwiches and tuna wraps.

“Our main and primary goal was to open up the door for the kosher traveler so they did not have to eat out of their suitcase anymore,” said Keith Keiser, director of sales and catering at Rosen Plaza. “Our goal is to have a luxury kosher product.”

When I dialed room service on a recent Thursday to put in my Shabbat order (Sabbath meals require 24-hour advance notice), I was the hotel’s first kosher room-service order. The food wasn’t just fresh and good – we had the Asian chicken salad ($22), pan-seared chicken breast wrapped in turkey pastrami ($35) and roast beef in Cabernet reduction with potatoes ($45) – but super convenient.

Instead of spending Friday afternoon at the supermarket and trying to make a salad with plastic utensils to serve in the ice bucket, we hung out poolside. On Saturday, there was a prayer minyan in the hotel, and that evening we joined some Israelis we had met for light kosher fare at Café Matisse, the ground-floor restaurant with kosher options. When my kids got hungry on Shabbat afternoon, I was able to grab some kosher grub at the quick mart in the lobby without using cash.

Rosen Plaza hopes to make its money not just from kosher travelers like me (full disclosure: the hotel hosted me, so I didn’t pay anything), but from Jewish conventions and events. The hotel is connected by sky bridge to the Orange County Convention Center.

Kosher at the parks

Kosher travelers going to most of Orlando’s theme parks – isn’t that why you’re here? – are going to have to pack a lunch.

That’s true for Legoland, Sea World and even the Holy Land Experience. (Despite its name, the Yom Kippur Plate is definitely NOT kosher. Neither is the park, for that matter.)

One notable exception is Disney World, where you can order kosher food at most of the entertainment complex’s on-site restaurants. 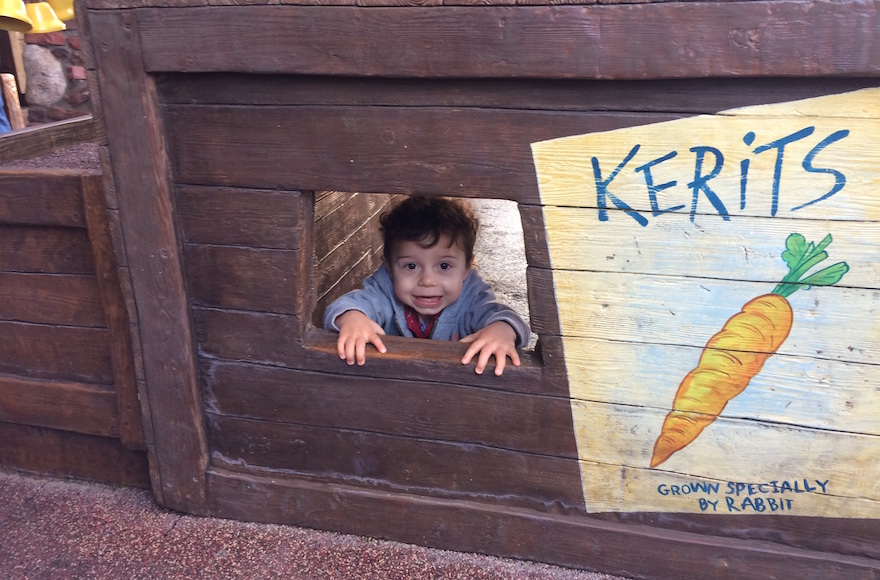 There are, however, a couple of catches. One, to eat in a sit-down restaurant you’ll have to order meals at least 48 hours in advance (Disney’s website wrongly suggests 24 hours is sufficient). Two, if you want a reservation around dinnertime rather than 4 p.m. or 10 p.m. (the slots I was offered), you’re best off reserving weeks in advance – Disney takes reservations as early as 180 days out; call (407) 939-3463.

Finally, kosher menu options will be limited. Depending on where you snag a spot, some restaurants may have more dishes than others. When we made reservations at the Liberty Tree Tavern at Magic Kingdom, for example, the kosher menu included a variety of dairy or meat entrees, including glazed chicken breast, salmon, lasagna or pizza. The kids menu had mac & cheese, chicken nuggets and hot dogs.

At fixed-price eateries, the price for dinner was $35 for adults and $19 for children. At restaurants with a la carte menus, entrees ranged from $20 to $25 for adults and $8.50 to $11 for children. Kosher desserts such as apple strudel and chocolate layer cake can be ordered, but no need to waste your money: Disney’s own snacks and candy will do just fine.

Don’t be worried by the side-by-side dairy and meat (a kosher no-no). Everything comes prepackaged like airline meals, prepared outside the park by Webermans Traditional Foods, a glatt kosher caterer with OK Kosher certification.

Quality aside, it’s a real treat having a hot kosher meal at Disney. Plus, if you play your cards right, you can dine at the very spot where (I’m told) Lady and the Tramp shared their first kiss.

If, like me, you’re not good at planning in advance, you can still pick up kosher food on the spur of the moment at a Quick Service eatery.  In the Magic Kingdom, Cosmic Ray’s Starlight Café sells pizza, hot dogs, chicken nuggets, burgers and other prewrapped Webermans meals. Prices are under $10.

Kosher outside the parks

If you’re like most kosher travelers and plan to fend for yourself when it comes to lunch at the theme parks, chances are you’ll have quite an appetite worked up come dinnertime.

You could just go to the Winn-Dixie supermarket 2 miles from Disney at 11957 S. Apopka Vineland Road, which carries a variety of kosher cold cuts, hot dogs, poultry, fresh chopped beef and meat and dry goods (including delicious challahs). Or you could try one of Orlando’s two kosher restaurants.

Kosher Grill, an Israeli bistro at 5615 International Drive, near Universal Studios, is definitely the superior one. The Israeli fare – hummus, shwarma, kufta kebabs, schnitzel, falafel – is fresh, fast and reasonably priced, with entrees under $20. The burgers and fries are good, too. When I visited, the local kosher agency had pulled its certification, but Kosher Grill’s proprietor told me it had to do with the separation of meat and fish utensils and was being resolved.

The alternative, Kosher Gourmet, is definitely kosher but hardly gourmet. The food isn’t bad – I liked the burgers and barbecue wings – but the ambiance is a reminder of how some kosher establishments behave – like they don’t have to compete for customers. You’ll sit at cafeteria-style tables surrounded by refrigerated cases storing the restaurant’s aging raw ingredients. (There’s also a dairy side that sells pizza, which was closed when we visited for dinner.) Our waitress wore a ratty T-shirt more appropriate for janitorial tasks than food service, and our request for water was treated as if it were exotic.

Kosher Gourmet also does catering, which is good news. You’re better off taking your food to go.