Russian Jews built this city on rock and roll (and klezmer) 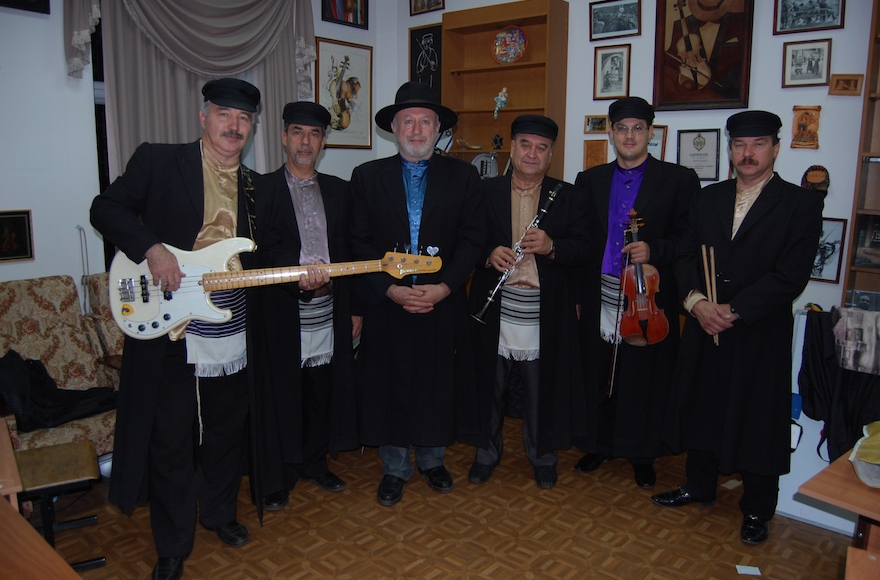 KAZAN, Russia (JTA) — When the six members of the Simcha klezmer band hauled their instruments into a dilapidated rehearsal space, no one suspected they were about to hijack a government building in this large, clean city some 450 miles east of Moscow.

But that’s exactly what happened in 1995 when this popular ensemble — founded in 1989 by Jewish musicians during the Soviet Union’s twilight years — entered the Teacher’s House, a government-controlled building that had once been a synagogue. For three years, city officials had pledged to return the structure to the Jewish community.

But the band’s members had had enough of empty promises. Determined to hold the mayor to his word, the players remained barricaded inside for three days as police prepared to storm in.

The standoff ended with the city giving up the synagogue, which it signed over to its 8,000-member Jewish community the following year.

In this part of Russia, near the Ural Mountains that divide Europe from Asia, Simcha has been the linchpin of the Jewish community’s growth and strength and a symbol of the Jews’ determination to maintain their religious and cultural identity amid persecution.

READ: How a Jewish reporter celebrated Hanukkah at the Kremlin

“Many Russian Jewish communities grew to include klezmer bands,” Eduard Tumansky, the band’s current leader, told JTA after a performance in September celebrating the synagogue’s centennial. “But I know of no other klezmer bands besides ours that grew into a Jewish community.”

Sonts, who opened a Jewish cultural center, Menorah, in 1987, “used the band to turn musical events into cultural-religious events,” Tumansky recalled. “We performed during the holidays. Before [Kazan’s] Jewish people had a synagogue, they got together at Simcha concerts. Simcha became the engine for Jewish life.

“Simcha was the Jewish community’s main lobbying platform and face,” he said. “So when the Soviet Union collapsed, we already had strong partnerships. Everybody in Kazan knew Simcha.”

Later the community hired a rabbi for its synagogue and built a Jewish school – institutions that took over the task of serving as an axis for Jewish life here. Sonts became the president of Kazan’s Jewish community – a role he maintained until his passing in 2001.

After returning the Teacher’s House, authorities in Kazan have done more than give the Jews a synagogue: They turned it and the community into tourist attractions.

Since 2012, the city has held an annual Jewish music festival around Rosh Hashanah. And last year, the city held a series of Jewish-themed events outside the synagogue, including Kazan’s first Limmud FSU Jewish learning conference and a gathering by Chabad rabbis from across the former Soviet Union.

The events attracted an unlikely mix of secular and religious Jews, who flooded the spacious, red-cobble pedestrian streets of Kazan’s old city, with its mosques and gold-spired Russian Orthodox churches.

Local Jews say they feel safe among the Sunni Muslim majority in the Russian state of Tatarstan, of which Kazan is the capital.

“I regularly put my tefillin on while waiting for the subway in the morning,” said Gershon Ilianski, 16, a student at the Jewish high school here. “I know they have problems with Muslims in Western Europe, but I never worried anyone would bother me here.”

Thirty years ago, however, when Russia was still communist, Jews, Muslims and Christians all needed a non-religious alibi to worship.

“Simcha performed at Purim and Hanukkah parties while camouflaging the religious and communal nature of these events,” Tumansky said. “To the community, the concerts were [seen] as a Jewish event. To authorities, just a musical one.”

Even so, such musical gatherings were not allowed elsewhere in the Soviet Union, where Communist government sought to blur ethnic identities. This policy was less strictly enforced in Kazan, as its population was deeply attached to Islam and its heritage.

“Moscow realized it couldn’t restrict the locals too much on religion and tradition, because there’d be too much alienation,” said Chaim Chesler, founder of the Limmud FSU organization. “The result is an inspiring example of coexistence.”

This atmosphere of relative tolerance in Kazan during the Soviet era attracted hundreds of Jews from other parts of the Soviet Union. At a time when some universities nearer to Moscow barred Jews, they were accepted without problem at Kazan’s institutions of higher education, the Ukraine-born Sonts said in an interview he gave to local media before his death.

When the Soviet Union collapsed in 1991, Kazan already had a functioning Jewish community — something that would take years to grow in other Russian cities.

This head start has meant that Jewish lay leaders have been able to have a more hands-on approach to developing their community. For example, unlike most other Jewish Russian communities, Kazan employs its Chabad rabbi, Gorelick, full time. Elsewhere in Russia, rabbis often work independently of the community, sometimes competing with its lay leaders for donations from local philanthropists.

Last September, the community celebrated its strength alongside its synagogue’s centennial by rededicating the shul following renovations. Tumansky, wearing his trademark black hat, performed with Simcha’s other five musicians before a crowd of several thousand outside the synagogue.

READ: In an ultra-wealthy Moscow suburb, a luxurious JCC opens its doors

“It’s true that we are now the sideshow of the community we used to run,” he said of the band. “But then again, that was exactly what we fought for: to have a normal community.”

The concert was unorthodox; while Simcha primarily played klezmer, there were notable electric guitar and country music influences. After each solo, the crowd, a mix of Jews and non-Jews, waved blue and white balloons emblazoned with a Star of David, enthusiastically reacting with whistles and yelps.

“Tell me,” Tumansky told a reporter after the show. “Have you ever seen a Jewish community built on rock and roll?”