Who are the Jews of New Hampshire? 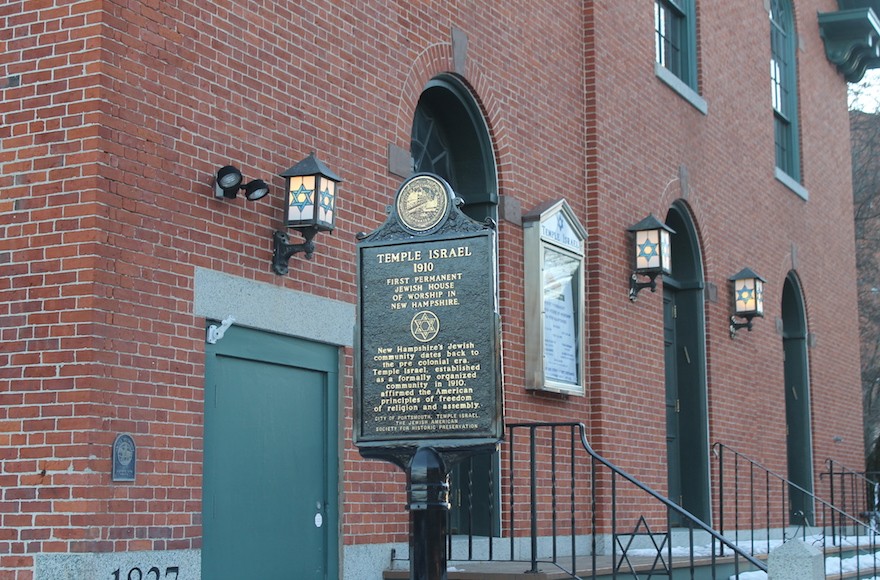 MANCHESTER, N.H. (JTA) – Though home to just one-third of 1 percent of all Americans, New Hampshire long has played an outsized role in the U.S. presidential nominating process.

Just who are the Jews of the Granite State? Here a few highlights.

A few characteristics distinguish the 1.3 million residents of New Hampshire. They’re old, with a median age of 41.9 (third-oldest in the country), and  94 percent white (fourth-whitest state in America). Fewer than 20,000 of the state’s residents are black.

There aren’t too many Jews, either. Jewish federation officials say they know of 3,000 households with at least one Jewish person, leading them to an estimate of 10,000 Jews in all of the state.

“It’s not easy being Jewish in New Hampshire compared to New York,” said Joel Funk, who grew up in New Jersey and moved to the Granite State in 1975. “You have to make it happen.”

Adam Sandler and Sarah Silverman are from New Hampshire.

The first Jew to make New Hampshire his home arrived in 1693 from Palestine, settling in New Castle, according to the Strawbery Banke museum of living history in Portsmouth.

READ: New Hampshire Jews trust Bernie Sanders, but voting all over the map

‘Live free or die’ = no income tax or sales tax.

Though New Hampshire is a geographic mirror image of neighboring Vermont, the two states have very different cultures and reputations. Vermont is known as more hippie-dippy, tourist friendly and progressive. The state, home to Democratic presidential hopeful Bernie Sanders — an avowed democratic socialist — has voted Democrat in every presidential election since 1992. Granite Staters tend to be more libertarian and gruff, and they are twice as numerous as Vermonters. With no state income tax or sales tax, New Hampshire draws the kind of people who want government to leave them alone.

“There’s a rugged individualism that permeates New Hampshire,” said Rabbi Robin Nafshi, who moved to New Hampshire nearly six years ago to lead Temple Beth Jacob, a Reform synagogue in Concord. “The state motto, ‘Live free or die,’ is taken very seriously here. People don’t like to be told how or what to do.”

Nobody moves to New Hampshire for its Jewish life, and some have left because of its dearth. But the state still has pockets of Jewish vibrancy.

New Hampshire boasts about a dozen synagogues representing all the non-Orthodox Jewish movements, from Reform and Conservative to Reconstructionist and unaffiliated. The only year-round Orthodox presence in the state is a pair of Chabad centers, in Manchester and at Dartmouth College in Hanover.

In the summer, however, the northern town of Bethlehem fills with Satmar Hasidim who have been coming to the White Mountains for a century to escape the heat and foul air in New York. Hasidim stricken with allergies began coming to New Hampshire as early as 1916 to escape the pollen in their hometowns. Bethlehem, home to the National Hay Fever Relief Association, is reputed to be pollen-free.

The town’s longtime kosher hotel, a rundown B&B called the Arlington, shut down a few years ago. A new kosher hotel is being built in its place.

A historic mikvah was discovered in Portsmouth.

A century-old mikvah in Portsmouth was unearthed in 2014 by archaeologists working in a neighborhood that used to be home to Russian Jewish immigrant families. The ritual bath there is one of only four historic mikvahs unearthed in the Northeast, according to the Strawbery Banke Museum, which manages the historic site where the mikvah was found.

Among the two dozen or so historic buildings at Strawbery Banke is Shapiro House, a living-history museum where visitors can learn about what life was like for early 20th-century Jewish immigrants in Portsmouth through re-enactments performed by actors dressed in period costume.

Descendants of the Shapiros, who owned the house, still live in the area and are members of nearby Temple Israel, a Conservative synagogue established in 1905.

Among the major events on the Jewish communal calendar are an annual Jewish film festival each spring, the National Havurah Institute’s weeklong summer program in Rindge and the annual Jewish food festival hosted by Temple B’nai Israel in Laconia. Nashua’s Raymond Street Klezmer Band, led by a retired doctor who is also a mohel, Alan Green, is a point of pride for local Jews.

Aside from the synagogues and a single Jewish federation that serves the entire state, New Hampshire has no other Jewish institutions. There is a small federation-run preschool but no Jewish day school, no JCC, no Jewish senior center and no Jewish family services — signs both of the dearth of Jewish New Hampshirites and the high degree to which local Jews are assimilated, longtime Jewish locals say.

“It’s pretty much an assimilated community here,” said Steve Clayman of Manchester. “We moved here from New York over 30 years ago because of the lifestyle, to live in an area closer to the outdoors-related things we love to do. It’s a challenge to connect with Jewish life.”

Dartmouth has New Hampshire’s only kosher eatery and Hillel chapter.

Dartmouth College is home to the state’s only kosher eatery: a dining hall called The Pavilion that serves kosher and halal meals and was conceived jointly by Jewish and Muslim students. If you want kosher food elsewhere, you’ll have to go to Trader Joe’s, which carries Empire kosher chicken, challah and some kosher cheeses.

Dartmouth is also home to one of the only full-fledged Hillel college chapter in the state. One other New Hampshire school, New England College in Henniker, is served by the Hillel Council of New England.

Jews once were barred from holding elected office in New Hampshire.

New Hampshire’s first state constitution, ratified in 1784, did not allow Jews (or any non-Protestants) to hold elected office. Restricted Jew-free hotels persisted in New Hampshire’s White Mountains until the mid-20th century. Until four years ago, the tiny town of Mont Vernon had a recreational water hole with the offensive-sounding name Jew Pond — residents voted to change it in 2012.

“In New Hampshire, unless you were born here or your grandparents or great-grandparents were born here, you’re left to feel like you’re an outsider,” Temple Beth Jacob’s Rabbi Nafshi said. “If you’re not a white Christian, you’re welcomed here to an extent, but you’re never really fully integrated into the society.”

New Hampshirites tend to be clueless about Jews

Jews who live in New Hampshire today say they don’t encounter much anti-Semitism, just lack of awareness. Schools routinely schedule tests or picture days on Jewish holy days. Nafshi recalls a child in her congregation being benched from his school’s basketball games because he missed two practices due to religious conflicts — the first night of Hanukkah and the Friday evening his religious school class led Shabbat services.

“It’s a complete lack of knowledge or sensitivity to the Jewish community,” Nafshi said. “It often makes our kids make feel lesser or outside the norm.”

The rabbi recalled the story of a second-grader from her congregation whose best friend came to school one day and told him they couldn’t be friends anymore because “you killed Jesus.” The Jewish family soon decided to leave New Hampshire, according to Nafshi.

Nevertheless, the state has unusually strong Holocaust education programming in the public schools, thanks to the efforts of the Cohen Center for Holocaust & Genocide Studies at Keene State College, which provides educational materials and runs public workshops. The center is run by non-Jewish leadership.

The Jewish federation recently sold its building and is retooling.

When the Jewish Federation of New Hampshire sold its building last year in the heart of Manchester and moved into rented space, there were rumors around town that the state’s largest Jewish charity was teetering. In addition to the sale, the federation has been downsizing, and last summer replaced a full-time executive director with a shared director, Lauren Tishler Mindlin, who splits her time between New Hampshire and the other small federation she runs in Massachusetts’ Merrimack Valley.

But lay leaders at federation, which netted about $1 million from the real estate deal, said the sale was more of a strategic decision to unload an underutilized building with rising costs, use the proceeds to strengthen the federation’s endowment and focus more on programming. Serving such a widespread area, the federation wants to become a convener of Jewish institutions in New Hampshire.

“We’re trying to define ourselves really meaningfully as a statewide organization,” Jeff Crocker, the federation co-chair, told JTA. “We’re talking about what that means. We want to enhance collaboration between Jewish institutions in the state, to fill the voids where necessary. We try to provide some leadership. We help them think about ways to be innovative and try new things.”