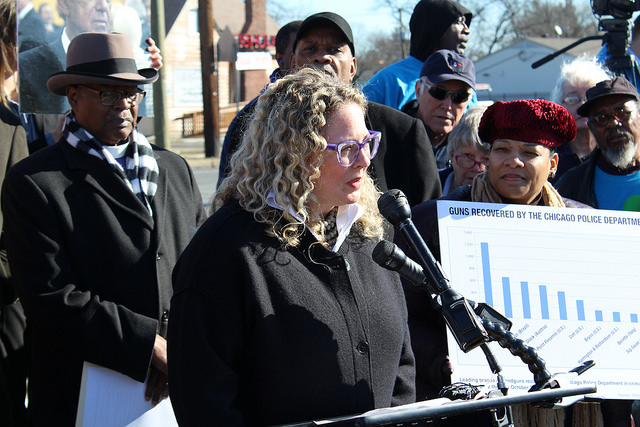 WASHINGTON (JTA) — Reform movement officials joined a protest rally calling on gun manufacturers to increase safeguards that would keep guns out of the hands of criminals.

The event, organized by the Do Not Stand Idly By gun safety campaign, drew faith leaders to the protest Tuesday in front of a store, Realco Guns, in a Maryland suburb of Washington.

One in eight guns sold at the store during the 1992-2010 period ended up at a crime scene, according to the Washington Post, an unusually high proportion.

The campaign called on manufacturers to better vet retailers that sell their product and to invest in “smart gun” technology, which keeps anyone but a gun owner from using the firearm.

“It is time for CEOs of major gun manufacturers to set standards of responsible conduct for their industry,” said Rabbi Esther Lederman, the director of Communities of Practice for the Union for Reform Judaism and one of several Reform officials who joined the 40 protesters.

“That means it is time for them to look for ways to invest in smart gun technology, to take a hard look at who is selling their products and a harder look at who is buying them.”