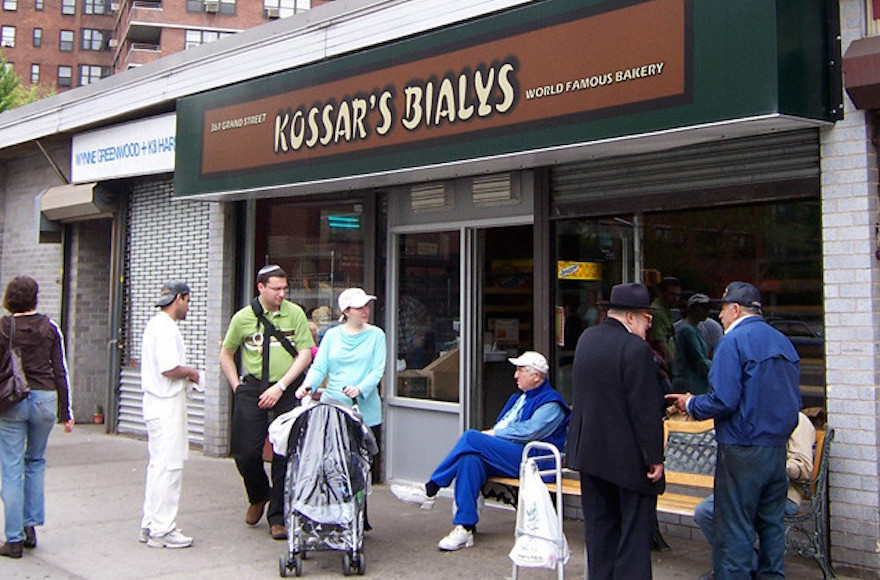 People mingling outside Kossar's Bialys before it closed for renovations. (Wikimedia Commons)
Advertisement

NEW YORK (JTA) — A Lower East side Jewish food landmark is reopening with an augmented menu after closing five months ago for $500,000 worth of renovations.

The 80-year-old Kossar’s Bialys on Grand Street, one of the few places to continuously sell the bialy — the bagel’s lesser-known cousin — is reopening on Friday with a modified name, Kossar’s Bagels & Bialys, several media outlets reported.

A flat roll with onions, the bialy has its origins in Poland, with its name a shortened version of Bialystocker Kuchen, or “bread from Bialystok, Poland,” according to MyJewishLearning’s The Nosher.

In addition to the added bagels, changes at the newly renovated Kossar’s include a glass wall enclosing the baking area, a revamped storefront that is, according to The New York Times, “newly decked out with subway tiles and white marble.”

The bakery has also expanded its offerings, adding a sandwich menu and its own variety of flavored cream cheeses, including horseradish. While the bialys previously came in only one flavor, the bakery now makes sun-dried tomato, olive and apple-cinnamon bialys.

According to the BoweryBoogie neighborhood blog, Kossar’s first opened at a different Lower East Side location in 1936, moving to its current site in 1960. The current owners, Evan Giniger and David Zablocki, who according to the Times bought the company in 2013, are the third set of proprietors to operate the bakery since its inception, BoweryBoogie said.

Giniger told Gothamist that the bialy is enjoying a moment of popularity.

“As I’ve been in the bialy business, it feels as if everybody in the world eats bialys because I’m just bombarded with emails and people just telling me they love the bialy, they can’t get a bialy anymore, they wish they could get a good bialy in their neighborhood,” he said, according to Gothamist. “It feels like people all over the country, and even all over the world, are clamoring for a good bialy, much more so than I would ever expect if I wasn’t intimately involved in the business.”