Sanders, Clinton in sharp exchange over his Iran policy 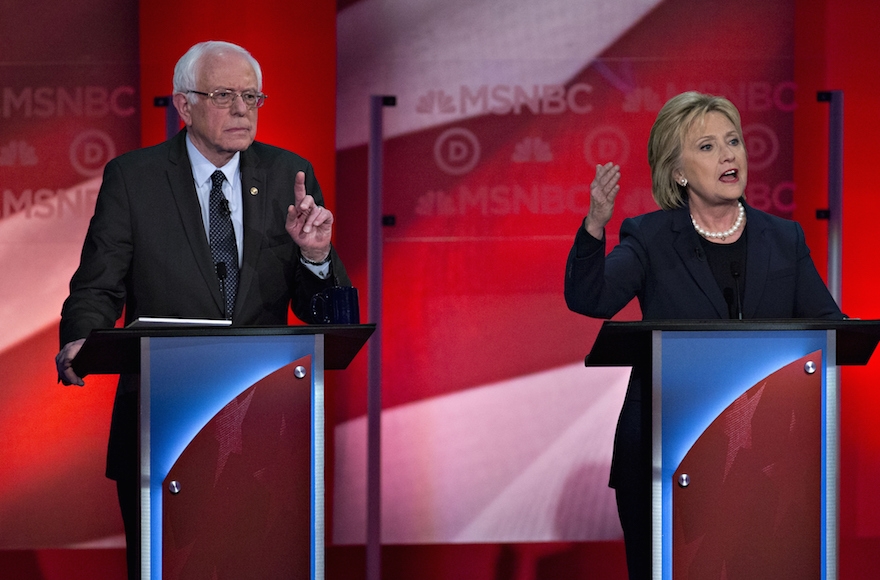 WASHINGTON (JTA) — Hillary Rodham Clinton and Bernie Sanders snapped at one another over the Jewish senator’s Iran policy in their final debate before the New Hampshire primary contest, with the former secretary of state twice suggesting it would endanger Israel.

The NBC moderators of the debate in Durham, New Hampshire, on Thursday night pressed Sanders, an Independent senator from neighboring Vermont, on what they said were gaps in his foreign policy. Sanders has not named a foreign policy team of advisers and generally focuses on the economy in his campaigning.

Clinton stepped in with her own broadside, naming Israel as facing increased dangers under Sanders’ policies.

“A group of national security experts, military intelligence experts, issued a very concerning statement about Senator Sanders’ views on foreign policy and national security, pointing out some of the comments he has made on these issues, such as inviting Iranian troops into Syria to try to resolve the conflict there; putting them right at the doorstep of Israel,” she said.

Sanders has not quite advocated inviting Iran to add troops to its contingent already in Syria, where it is allied with the Assad regime and is combating rebel forces, including the Islamic State terrorist group. Instead, in a November debate, he lumped Iran in with other Muslim states he said would be more appropriate than the United States to directly battle the Islamic State.

“The Muslim nations in the region — Saudi Arabia, Iran, Turkey, Jordan, all of these nations — they’re going to just have to get their hands dirty, their boots on the ground,” he said in the November debate.

Sanders has a substantial lead on Clinton in New Hampshire, the first primary state, which votes on Tuesday. Clinton won a razor-thin victory in Iowa, the first caucus state, on Monday, but Democratic Party officials in the state are taking another look at the results updating where discrepancies have been found, the Des Moines Register reported Saturday. A win in New Hampshire could lend Sanders momentum as he challenges Clinton nationally, where she is ahead in polling.

He has pushed back against Clinton’s resume, which includes a stint as President Barack Obama’s first secretary of state, by noting that he opposed the Iraq War in 2002, while Clinton, then a senator from New York, supported it. She now says she regrets voting for the war.

Sanders returned to that theme on Thursday night. “Once again, back in 2002, when we both looked at the same evidence about the wisdom of the war in Iraq, one of us voted the right way and one of us didn’t,” he said.

Sanders and Clinton also tussled over whether he said he would “normalize” ties with Iran in the wake of last year’s nuclear deal with the country, which both candidates support. In a debate last month, Sanders said, “What we’ve got to do is move as aggressively as we can to normalize relations with Iran,” although he quickly added that he was not advocating for full ties, and noted Iran’s backing for terrorism.

“They are destabilizing governments in the region, they continue to support Hezbollah and Hamas in Lebanon against Israel,” Clinton said at Thursday’s debate. “If we were to normalize relations right now, we would remove one of the biggest pieces of leverage we have to try to influence and change Iranian behavior.”

Unusually for Sanders, who has been reticent about his Jewish upbringing, he closed Thursday’s debate by relating a memory of his father.

“My dad came to this country at the age of 17 from Poland,” he said.

“Didn’t have any money, couldn’t speak English, he died pretty young, and I think it would have been beyond his wildest dreams to see his son up here on this stage today running for president,” Sanders said. “I love this country, and my dad loved this country, and he was the most proud American because of what it gave him in terms of raising his family, even though we never had much money.”