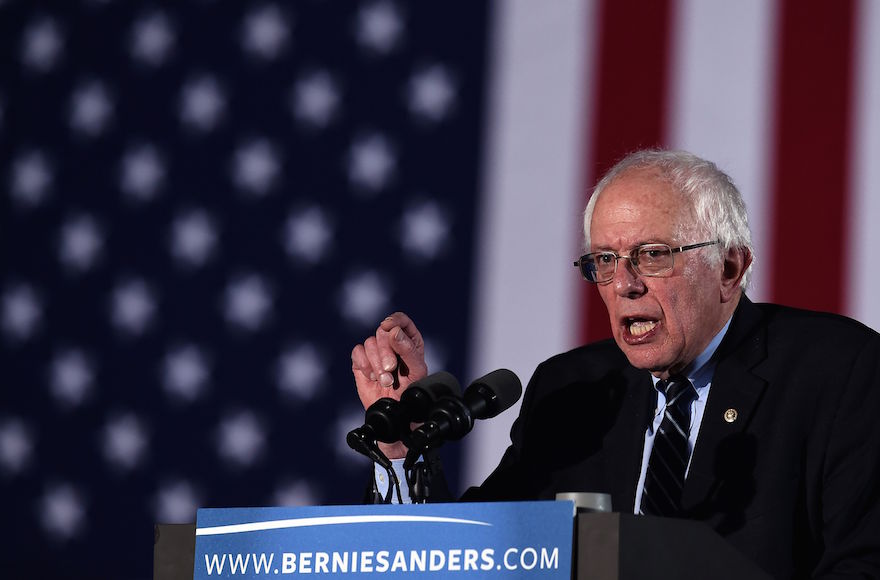 NEW YORK (JTA) — Bernie Sanders is having a month of historic firsts.

In New Hampshire on Tuesday night, he handily won the Democratic Party contest, becoming the first Jew to win a presidential primary. In Iowa, he became the first Jewish presidential candidate — the first non-Christian, even — to win delegates in a major party’s caucus or primary.

What’s more significant is that he’s the first Jew to mount a credible campaign for the White House.

It’s not that credible Jewish politicians haven’t run for president before. There was Republican Sen. Arlen Specter in 1996 and Democratic Sen. Joseph Lieberman in 2004. But they were out of step with their parties and their candidacies went nowhere. (Both later quit their parties.)

And if the prospect of Republicans nominating a pro-choice Jew in the 1990s or Democrats tapping a Jewish hawk in the Iraq War’s aftermath seemed far-fetched, the notion of a Jewish socialist with a thick Brooklyn accent giving Hillary Clinton a run for her money is really incredible.

Yet one aspect of Sanders’ improbable candidacy is, remarkably, treated as mostly unremarkable: his Jewishness.

Sanders doesn’t go out of this way to highlight his Jewish background, nor have his supporters or opponents made it an issue. The Jewish community has not rallied around him, nor has there been, until now, any Jewish groundswell of public pride or anxiety over his campaign. We have not heard calls for Jews to support their fellow Jew.

Contrast this with the prominence of gender in discussions of Clinton’s candidacy.

Former Secretary of State Madeleine Albright and feminist icon Gloria Steinem caused a stir several days ago when they seemed to rebuke younger women who back Sanders over Clinton.

“There’s a special place in hell for women who don’t help each other!” Albright said.

Meanwhile, American Jews are united in comparative nonchalance about Sanders’ Jewishness. Partly that’s because few expected he would do so well. But it’s also because Lieberman already broke the Jewish glass ceiling. His 2000 vice-presidential run proved Americans were prepared to put a Jewish candidate a heartbeat away from the presidency.

Sanders is different. He describes himself as “not particularly religious.” He is married to a non-Jewish woman. He is aloof from Jewish communal life. A Sanders campaign ad described the candidate simply as “the son of a Polish immigrant.”

Tellingly, last Rosh Hashanah, Sanders wasn’t in synagogue. He was in church — well, not church per se, but he was at Liberty University, the conservative Christian educational citadel founded by the late Rev. Jerry Falwell. Sanders was there preaching his secular brand of social justice gospel. Democratic socialism, not Judaism, is his real religion.

But Sanders is also, in his own way, a very Jewish candidate.

Sanders cleverly acknowledged as much during his “Saturday Night Live” appearance alongside his comic doppelganger, Larry David. Playing a rabble-rousing socialist immigrant aboard an ocean liner bound for America, Sanders introduces himself as “Bernie Sanderswitzky, but we’re going to change it when we get to America so it doesn’t sound quite so Jewish.” To which David deadpans: “Yeah, that’ll trick ’em.”

It’s not just Sanders’ Brooklynite bearing that marks him as inescapably Jewish. Nor is it the fact that he volunteered in Israel on a kibbutz. (After all, former Republican presidential hopeful Michele Bachmann also worked on a kibbutz, and her 2012 presidential campaign’s Judaic highlight was her mangling of the word “chutzpah.”)

Rather, Sanders’ personal and political story is emblematic of a whole generation of Jewish idealists.

Sanders was far from the only young Jew in the early 1960s to fervently embrace socialism, following in the footsteps of Jewish radicals from earlier eras. Like many Jews, Sanders was deeply invested in the black struggle for civil rights; he was active with the Congress of Racial Equality and attended Martin Luther King’s “I Have a Dream” speech. After college, Sanders was in the vanguard of the mini-migration to Vermont of socially conscious Jewish urbanites going “back to the land.”

Today, Sanders invokes his Jewish roots to explain his passion for combating bigotry.

In one of his campaign’s most memorable moments, a young hijab-wearing woman at a Sanders rally told the candidate she was worried about anti-Muslim rhetoric in American politics. Sanders beckoned her over for a hug.

“I’m Jewish,” he said. “My father’s family died in concentration camps. I will do everything that I can to rid this country of the ugly stain of racism.”

Sanders’ disconnect with organized Jewry, his attenuated religiosity and his marriage to a non-Jew are not atypical for American Jews, plenty of whom are unaffiliated, secular and intermarried. Sanders fits comfortably into the growing category that Jewish demographers dub “Just Jewish.”

At the same time, Sanders’ staunchly left-wing stances occasionally have taken him outside even the liberal mainstream of American Jewish politics. For instance, Sanders backed the Rev. Jesse Jackson’s historic presidential bids in 1984 and 1988, notwithstanding the black leader’s then-acrimonious relationship with the Jewish community.

On Israel, too, Sanders expresses positions that would put him at odds with Jewish communal leaders. He has strongly criticized Israel’s treatment of the Palestinians and suggested that as president he would “maintain an evenhanded approach to the area.” Yet he has come under fire from anti-Israel activists, as when he was heckled at a 2014 Vermont town hall meeting for expressing sympathy with the Jewish state over the threat it faces from Hamas rocket attacks even as he condemned Israel’s conduct in Gaza.

Iowa and New Hampshire can’t tell us much about how Sanders will perform with Jewish voters, and Clinton has plenty of Jewish devotees. But these early contests do indicate that Sanders’ Jewishness isn’t hurting him with Democrats. If anything, Sanders’ fans find his disheveled-old-Jewish-socialist-from-Brooklyn image to be a charming badge of authenticity.

Still, there are those who think being Jewish can be a political liability. New York City’s former mayor, Michael Bloomberg, who is toying with the idea of jumping into the presidential race, once expressed doubt that America would elect a “short, Jewish, divorced billionaire.” Bloomberg may be correct that being a billionaire or short could be a liability, but is he right about Jewishness?

Polling suggests that Jews may be America’s most popular religious group. Jews are warmly regarded by Democrats and Republicans, evangelicals and atheists. A recent poll by the Pew Research Center found that only 10 percent of Americans are less likely to vote for a Jew for president, compared to 20 percent who said they were less likely to vote for an evangelical Christian.

READ: Poll: 10% of Americans ‘less likely’ to vote for a Jew for president

Perhaps it’s because everyone can seem to find something to like about Jews: To conservative evangelicals, Jews are the Bible’s “chosen people;” to secular and liberal Americans, Jews are liberal, secular types.

Sanders’ identity as a socialist may be much more problematic: 50 percent of Americans say they wouldn’t vote for a socialist. And the fact that he’s not particularly religious could be a liability: 51 percent of Pew respondents said they were less likely to vote for an atheist for president.

If Sanders’ Jewishness is not an issue, perhaps it’s because Jews are so well-integrated into contemporary American life. Indeed, Sanders is not the only presidential hopeful with intimate Jewish ties. His rival for the Democratic nomination has a Jewish son-in-law who donned a yarmulke and tallit at his wedding to Chelsea Clinton. The winner of New Hampshire’s Republican primary, Donald Trump, has a daughter who converted to Judaism and goes to an Orthodox synagogue.

(Daniel Treiman is a student at the New York University School of Law. He is a former managing editor of JTA.)