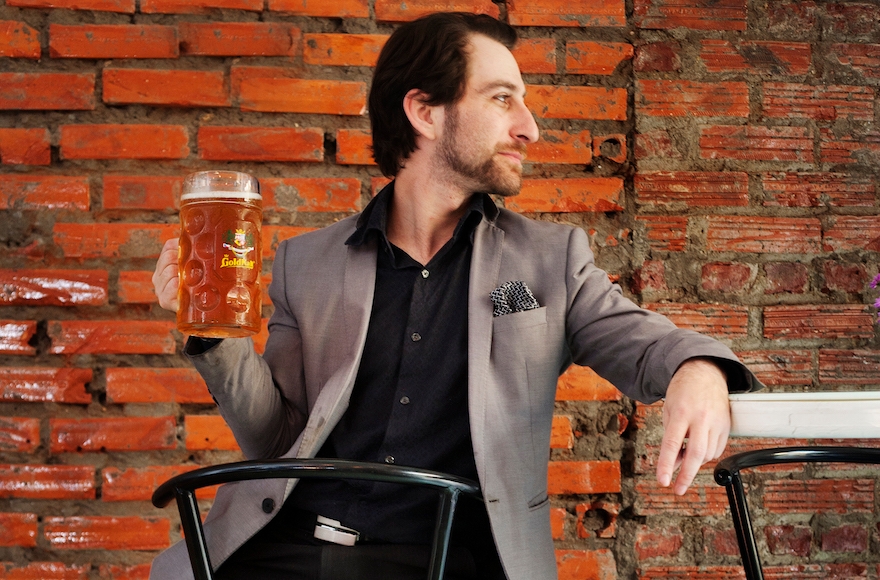 HANOI, Vietnam (JTA) — Shahar Lubin earned his culinary chops in Israel and, later the United States, cooking his way through more than 20 restaurants, starting at the age of 16.

Still, it was a leap when he moved to Vietnam and opened a restaurant of his own.

“I said, ‘I’ve been doing it for other people for so long, I might as well do it for myself,’” said Lubin, who operates Daluva, the first and only “Middle Eastern gastropub” in Hanoi, a city of 7 million with a lively street-food culture.

Lubin, 37, grew up in the Israeli village of Hararit, in the Galilee, and spent summers working as a shepherd. He said he began cooking as a social activity with boys in neighboring villages. In 2000, after serving in the Israeli army and living in Jerusalem, Lubin moved to Philadelphia, his father’s hometown, and began working his way up the restaurant food chain, from line cook to senior chef.

Working in a wide variety of kitchens, Lubin said he prepared everything from pub food to “contemporary Israeli” cuisine. At one point he worked in the same restaurant under three different incarnations.

“I was like a cat — I came with the building,” he said with a laugh.

But the long hours exacerbated a chronic back injury and Lubin grew desperate for a long break. Southeast Asia seemed like a logical place to get “recharged,” he said, partly because he liked what he knew of the region’s food. So Lubin traveled there in 2009 for what he thought would be a one-year sabbatical.

Lubin said he spent most of a year exploring Southeast Asian cities, including Bangkok, Thailand and Yangon, Myanmar.

In Hanoi, Lubin met the owners of a Vietnamese restaurant group who were planning to open a Mexican restaurant. They offered to bring him on as a consultant.

The job didn’t materialize, but Lubin stayed in Hanoi anyway, working as a restaurant consultant, English teacher and freelance writer. In 2012, when a restaurant was folding in Hanoi’s upscale West Lake district, he took it over.

READ: From the archives: Israel’s friend in Hanoi

Daluva’s previous owner had created a menu of Asian and Western fare that Lubin describes as “nondescript.” So Lubin renovated the restaurant and relaunched it in 2013.

The menu now has Israeli favorites like hummus, falafel and shakshuka alongside American burgers and rib-eye steaks. But other items, such as the Tunisian salmon stew or “fancy pants pizza” — topped with pears, blue cheese and cured duck pancetta — make it difficult to neatly categorize the restaurant’s offerings.

That’s intentional, Lubin said — he deliberately cooks in a range of styles, and he used to bristle when Philadelphia journalists labeled him an “ethnic” cook. 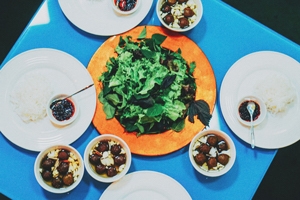 At Daluva, bún chả — a traditional Vietnamese dish of grilled pork and noodles — is made with falafel. (Courtesy of Daluva)

“I try to divorce food from its origin and think, ‘What is the taste?’ not ‘Where is it from?’” he said on a recent weekday morning as he sat in Daluva’s unassuming, exposed-brick dining room.

Lubin said the vast majority of Daluva’s ingredients are sourced locally, and he likes to use them in unorthodox ways. His tagines use Vietnamese salted limes instead of lemons, for example; his taramosalata has Vietnamese fish sauce instead of salted fish roe.

Israel’s ambassador to Vietnam is among those impressed. “I find him to be a very creative chef,” Meirav Eilon Shahar said in a telephone interview.

Another Daluva fan, Peter Nacken, a German travel and food writer who lives near the restaurant, said it was nice to have a “creative food spirit” around the corner.

“With these kinds of platters, you don’t realize you’re eating vegetarian,” Nacken said on a recent evening at Daluva, surrounded by empty white plates. He and his family were sharing a meze platter that included a tabbouleh made with diced banana flower.

The dishes at Daluva are not elaborately presented. Lubin said his instinct is not to show off his culinary prowess in obvious ways, and to instead focus on creating a casual dining atmosphere.

“I guess it’s a Philadelphia attitude,” he said. “In Philadelphia, we don’t like things that are too frou-frou.”

READ: The rise of ‘Jewish-slash-something else’ restaurants

But Daluva’s food is full of subtle complexity. A “pulled” eggplant sandwich, for example, is Lubin’s intrepid variation of the pulled-pork classic. In a cooking process that requires 12 to 14 hours of labor, he said, the star ingredient is smoked, roasted, peeled, dry rubbed and dehydrated — all before it meets a homemade barbecue sauce. The result is a smoky, tangy creation that would please ranchers and vegans alike.

And every few months, Lubin creates a specials menu based around whatever strikes his fancy. Previous menus have celebrated — and, to a degree, reinvented — cuisines from Greece, New Orleans, Japan and beyond. Last month, he created what may be the world’s first Vietnamese-Israeli fusion menu for a Culinary Friendship Week sponsored by the Israeli Embassy.

A highlight of the menu was Lubin’s quirky reinterpretation of bun cha, a Hanoi street-food medley of grilled pork, vermicelli noodles and fresh herbs. Lubin nixed the pork and replaced it with falafel.

“It seems improbable to give bun cha an Israeli flavor,” Shahar said, “but he did it.”

The restaurant is tucked among the West Lake villas and serviced apartments of wealthy Vietnamese and expatriates. But a more traditional Vietnamese neighborhood — complete with swarms of honking motorbikes and street vendors wearing traditional conical hats — is just a few blocks away. 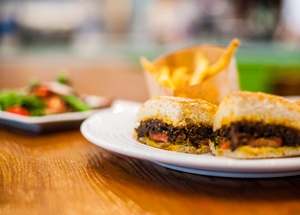 Lubin said he may someday move his restaurant to Ho Chi Minh City, Vietnam’s other major city, which is generally seen as more cosmopolitan and may be more receptive to his Middle Eastern gastropub concept.

“I’m happy with our product,” Lubin said. But for anyone serving non-Vietnamese cuisine in Hanoi, he added, “it’s hard, apparently, to be successful here, consistently, unless you’re an Italian or Japanese restaurant.”

Nguyen Phuong Mai, 27, a Vietnamese food blogger in Hanoi who goes by the nickname Tho, said some of her friends regarded Daluva’s food as “strange” because it is so unfamiliar to their palates.

But Mai has traveled in Israel, she said, and she recognizes a good chef when she sees one. On her blog, Tho Loves Food, she has praised Daluva in glowing terms.

Some of Mai’s posts include extended musings on the nuances of Lubin’s ingredients, or similarities and differences between Vietnamese and Middle Eastern cooking. But a recent heading summed up her views in just a few words.