The Supreme Court’s Jewish gentile: My memories of Justice Scalia 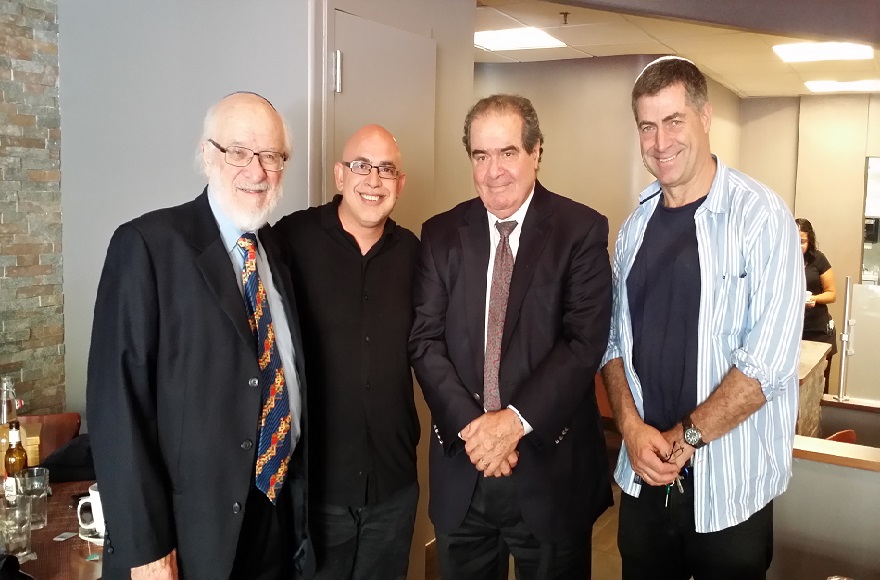 WASHINGTON (JTA) – “When there was no Jewish justice on the Supreme Court,” Antonin “Nino” Scalia told me, “I considered myself the Jewish justice.”

After Abe Fortas resigned in May 1969, there would be no Jewish justice on the court for nearly a quarter of a century, until President Bill Clinton named Ruth Bader Ginsburg to the court in 1993.

Scalia had been on the Supreme Court since Ronald Reagan appointed him in 1986, so there were seven years during which Scalia saw himself as the court’s guardian of Jewish heritage. The New York-raised judge was shocked that he had to teach his colleagues how to pronounce “yeshiva” (Chief Justice Rehnquist William called it “ye-shy-va”) and, Scalia added proudly to me, “I even told them what a yeshiva is.”

Scalia’s admiration for Jews and Jewish learning explains the frequent references in his opinions to the Talmud and other Jewish sources, and the significant number of Orthodox Jewish law clerks he hired.

We were both in the Harvard Law School class that began in 1957 and graduated in 1960 – only 10 women and no African-Americans were in a graduating class of almost 500. Scalia and I were invited to become editors of the Harvard Law Review at the conclusion of our freshman year; in those days Law Review membership depended entirely on grades.

Scalia and I were the highest-ranking bachelors in our law school class. Why was marital status relevant? Because in the 1950s, wives were expected to stay home and cook and clean for husbands who were competing for top slots in premier law schools and bountiful salaries in fancy law firms. Scalia and I had to fend for ourselves, and I spent many weekends commuting to New York for dates.

At a time when Richard Nixon was reviled, John Kennedy was idolized and Justice Earl Warren seemed to be taking the Supreme Court out of the Dark Ages, Scalia was a committed conservative. Although we acknowledged Scalia’s brilliance, none of the Review’s editors would have predicted, given the temper of the times, that he would make it to the Supreme Court. He served as notes editor of the Review and prevailed in an intellectual battle we had (I was effectively managing editor, then called treasurer) over whether a student-authored note should support the constitutional rights of Sabbath-observant business owners who were claiming, in two of the Sunday Law challenges, that they were constitutionally entitled to remain open on Sundays because their religious observance forced them to be closed on Saturdays. Only Justices Brennan and Stewart ultimately agreed with the Sabbath-observers’ contention. The note Scalia edited before the case was argued took what was later the Supreme Court majority’s position over my vociferous objection.

Scalia was unconventional, even in those days. Law Review editors vied for clerkships on the Supreme Court or with respected federal judges. Scalia chose not to join that competition. Instead he opted for a Harvard fellowship that enabled him and Maureen – the beautiful Catholic girl he met on the recommendation of another Review editor and later married – to travel to Europe and other exotic locations during the year after we were granted LLBs (jacked up by Harvard, many years later, to JDs). He then joined the Cleveland law firm known as Jones, Day, Cockley and Reavis after an interview during which he bowled over the partners with his familiarity with the Sunday Law cases that were being argued before the Supreme Court. 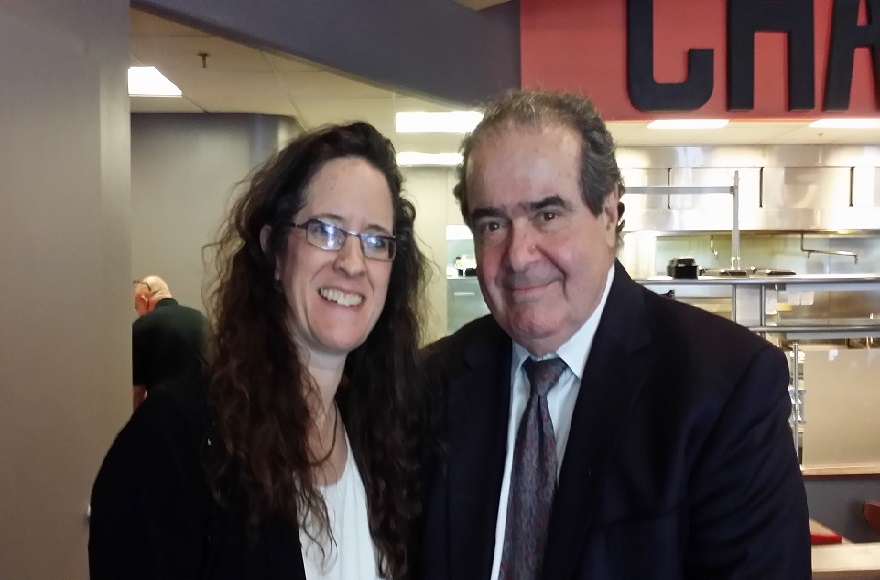 We became friends again when Scalia was named by Reagan to the U.S. Court of Appeals for the District of Columbia Circuit. In my first appearance before him, Judge Scalia gave my legal arguments a thorough drubbing and wrote the court’s opinion rejecting every legal claim I made – and then some. He did, however, vote to rehear another appellate-court decision that had rejected my constitutional claim for an Orthodox Jewish Air Force psychologist who wore a yarmulke with his military uniform. When he was promoted to the Supreme Court shortly thereafter (which I viewed as appropriate Divine reward because he and Ginsburg both made it to the highest court after they voted with us in the yarmulke case), we revived our law school friendship.

Scalia and his wife were guests in our sukkah, and he was kind enough to meet with law school classes I brought to Washington to hear Supreme Court arguments. (Zealously liberal students who claimed not to be able to tolerate Scalia’s judicial philosophy melted into personal fans after they met and spoke with the man. Rather than meeting the cantankerous grouch they were expecting, they saw and heard from a funny, modest, gregarious and intellectually honest judge.) He also accepted my recommendations to attend and address Orthodox Jewish gatherings such as colloquia run by Chabad-Lubavitch, sessions and dinners with Agudath Israel of America, and a mass meeting at Yeshiva University where he and I discussed current issues of constitutional law and public policy. Each event was enormously successful.

We seemed to share identical views on church-state issues. Scalia did not read the Establishment Clause of the First Amendment as broadly as secular Jewish groups do. In cases I argued before the court, he voted with a court majority (against the ACLU and the American Jewish Congress) to sustain the Chabad menorah in front of Pittsburgh’s City Hall and dissented when six members of the court held that public financing of a school reserved for handicapped children in the Satmar Village of Kiryas Joel, New York, was unconstitutional aid to religion. His views on government financing of religious institutions were applauded by Orthodox Jewish groups.

Disappointment came in 1990, however, when he surprisingly wrote a majority opinion that cut the heart out of the special status that religious observance had been granted by earlier Supreme Court decisions enforcing the Free Exercise Clause of the First Amendment. Supreme Court rulings had held that religious observance could not constitutionally be abridged unless government proved a “compelling interest.” Scalia’s opinion gave religion no greater respect than any secular interest. No party or friend-of-the-court brief had asked the Supreme Court to issue such a sweeping and revolutionary ruling. A rainbow coalition of groups interested in religious freedom (including the American Jewish Congress) then asked the court to reconsider. It refused to do so.

I asked Scalia how he could possibly reconcile that 1990 decision with the 1984 vote cast, when he was a federal appellate judge, in favor of the Air Force psychologist whose religious observance compelled him to wear a yarmulke. Scalia was, as usual, entirely forthright.

“I was on a lower court then and had to follow Supreme Court precedent,” he said. “When I was on the Supreme Court, I was the one who decided what the precedent would be.”

Apart from that one significant departure, Scalia had a consistent record of supporting minority religious observance. In June 2015, when he announced the decision he wrote in favor of  a Muslim applicant for a job at Abercrombie & Fitch who was unlawfully denied employment because she wore a headscarf, he called it an “easy case.”

There is universal agreement that Nino Scalia was brilliant, amazingly articulate and a real mensch. There is strong disagreement, however, over the side he chose in ideological battles. Scalia is, of course, an Italian name. If one writes it with Hebrew letters, there are two possible – albeit squarely contradictory – ways of writing Scalia. One is to use the letters sin, kaf, lamed, which are also the root of “sechel” –  Hebrew for “wisdom.” The other is to use the Hebrew letters samech, koof, lamed, which are the root “sokol” – meaning “to stone.”

Some praised Nino’s wisdom; others were ready to stone him. But all must concur that he was a great man, that the United States he loved is greatly diminished by his loss, and that he greatly revered Jews and Jewish tradition.

(Nathan Lewin is a Washington, D.C., attorney who specializes in religious freedom cases before the U.S. Supreme Court.)