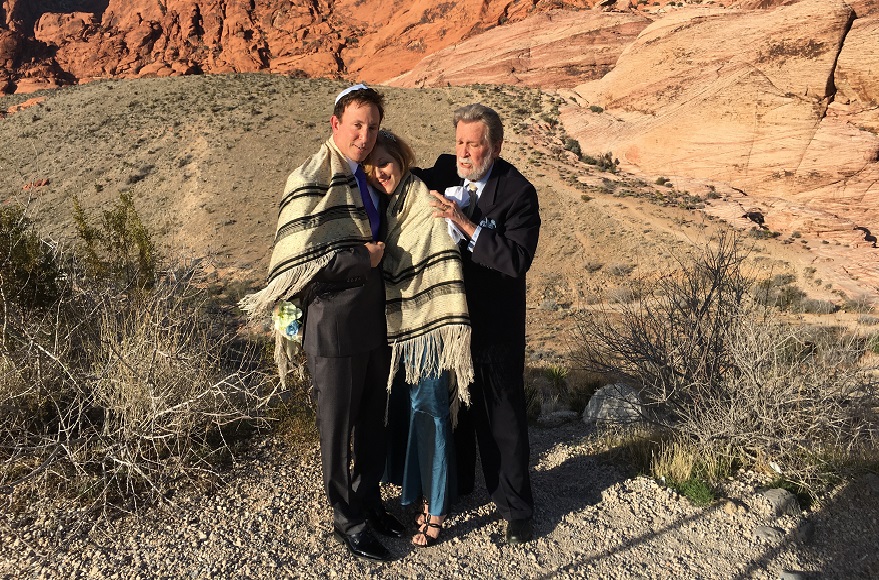 LAS VEGAS (JTA) – Rabbi Mel Hecht clutches his black coffee and paces in front of the Dunkin’ Donuts just down the road from the Red Rock Casino.

Karen Butt, resplendent in a teal bridal gown and carrying a bouquet of cloth flowers, is waving from the stretch limo idling in the parking lot unable to fit into a space. She trots across and apologizes for being late, but it’s all good because Hecht has turned on his rabbinical calm, flashing a huge toothy grin framed by his trim, white beard.

Her bridegroom, Craig Silver, follows in her wake, patting his inside pocket, making sure he has the rings.

“I thought this was a circumcision,” he says, introducing himself as “Rabbi Cutcherdickoff.”

Silver laughs, relieved – a little relieved, anyway. He’s getting married, after all. He launches into a story about how his mother insisted on a doctor for his own circumcision, which wasn’t a thing 59 years ago like it is today, but thinks better of finishing and trails off.

Hecht explains how to get from the parking lot to the actual Red Rock – not the casino, but the geological formation just west of this city.

“Meet us at the first turnoff,” he says.

READ: World Series of Poker: Who are the Jews dominating the finale?

The rabbi slips into his white SUV and checks the back seat with a pat for his gear: the battered, black leather briefcase stuffed with a kiddush cup, a golden tallit, an array of marriage certification stamps and an ancient Rabbinical Assembly prayer book. And a wine glass wrapped in a napkin.

Hecht has this routine down. He’s about to turn 77, and he’s been doing this since he arrived in Las Vegas in 1980 from Fort Pierce, Florida, where he was a congregational rabbi.

Call Graceland Wedding Chapel, scroll through the five Elvis options (from $199 for basics to $799 for dueling Elvises), ask about the “Yes, we do offer Jewish ceremonies” on the website’s FAQ page, and the lady on the phone will tell you, “Call Rabbi Mel.” There used to be another guy, she says, but he’s gone. Now it’s just Rabbi Mel.

Hecht confirms there was another guy, but he also can’t remember the name. That’s Las Vegas: People come and go and are forgotten.

Or it once was Las Vegas. Hecht is a holdover from the last of the city’s Wild West days, the 1980s, when there wasn’t much of an established Jewish community here, just two or three synagogues and folks moving in and out.

He came to serve an established synagogue but it didn’t work out, and he became the go-to guy for idiosyncratic Jewish weddings and funerals – rites that would make sense nowhere else but ring true in a town built by the Jewish mob, where roads just end and buildings rust half-completed, where Jewish would-be entertainers come to fail and Jewish one-time entertainers come to fade.

What once was Hecht’s side vocation – ministering to the transient – has become his full-time job. Other rabbis build community; Hecht tends to those fleeing communities. Some are pornographers, gamblers or gangsters who disappear until they die, when they want Hecht to make sure their long-estranged families know that in the end, they did not forget they were Jewish.

Others are like Butt and Silver, pretending for one fantastical weekend that all they have is each other, leaving behind families complicated by divorce and generational tensions.

“Las Vegas is perhaps the only place that is not so much interested in someone’s past as it is in how that person performs in the present,” says Hecht, who charges $400 for your basic nuptials.

At the Graceland Wedding Chapel, Hecht has never played “Elvis the rabbi.” But yes, there were Jewish brides who wanted an Elvis impersonator to sing before the ceremony, or after the ceremony, or in the middle of the ceremony. There was the bride who wanted Elvis walking her down the aisle.

Don’t brides want their fathers to give them away? I ask.

“They don’t come with the father,” Hecht says. “With a select group, but not their parents.”

Family in Las Vegas is not the one you’re born into, it’s the one you create. There was the Jewish showgirl who married an actor in the show. Like other wedding parties, she and her bridesmaids coordinated outfits. Unlike others, these were mesh dresses with very little underneath.

For the couple who wanted a Western wedding, Hecht appeared in dungarees, a three-quarter black coat, a wide-brimmed hat and a shotgun (unloaded). The Jewish costumers at Bally’s who threw a Renaissance wedding for themselves dressed Hecht in the flat hat and cassock-like garment a contemporary rabbi might have worn.

Two days before Butt and Silver wed, Hecht meets me at a Starbucks near his home. (In Las Vegas, distances are marked by outlets, casinos and strip malls. “It’s the one just past the Best Buy,” he explains.)

Outfitted in a black pinstripe suit and white shirt, he’s about to do a funeral: a man born to a Jewish mother and an Italian father who spent his life driving a cab and tending bar. He had started a family, abandoned it, then raised another – never marrying Jews, never raising his children Jewish. But one thing everyone in his family knew – from estranged to recent – was that he wanted to go out as a Jew.

Hecht will recite the El Malei Rachamim in English, to be true to the dead man’s wishes, but also so the families will feel connected.

“The funeral home knew who to call because of my reputation,” he says. “I’m a rabbi for all people, not just Jews.”

Karen Butt got to Hecht by Googling “rabbis and Las Vegas”; Hecht had incredible reviews. (Not that he would know; he hates computers and his wife handles emails.)

Butt, 49, a clinical social worker in Old Lyme, Connecticut, and Silver, 59, who develops real estate, had met on JDate two years earlier, and they talked with Hecht over the phone. She knew he was the one. He sounded “familiar,” she says, holding hands with Silver in the back of the limo.

“We wanted to focus on our marriage,” Butt says, explaining why the wedding is in Las Vegas. “It gets more complicated with families.” Silver chimes in: “We wanted it to be just about the two of us.”

There are parents and kids from previous relationships. How many times have they been married?

The limo arrives at the first turnoff in the Red Rock Loop. Families are gathered by the roadside to gaze at the canyon.

“Aren’t there too many people for a wedding?” Silver asks, having expected something a little more serene.

Butt, already out of the car, pulls Silver out.

“We’re walking out of here Mr. and Mrs. Silver, that’s all I know,” she says.

The passers-by become part of the ritual, bikers whooping cheers to Hecht’s grinning approval. This is Las Vegas, and family is who you make it in the moment.

Hecht throws the golden tallit over the couple. As they huddle, their faces etched in bliss, he blesses them in the first person plural, a “we” that encompasses himself, the couple’s absent children (whom he names), Pierson the photographer, me, the bikers roaring by, the grinning family watching from the overlook, the Jewish dead and living.

“We wish you the kind of home that is made of more than stone and wood,” the rabbi says, “that it will be an island that will protect you from the frenzy the world has become.”

Out comes the wine glass wrapped in a napkin. Silver smashes it not once but twice.

Hecht pronounces them man and wife.