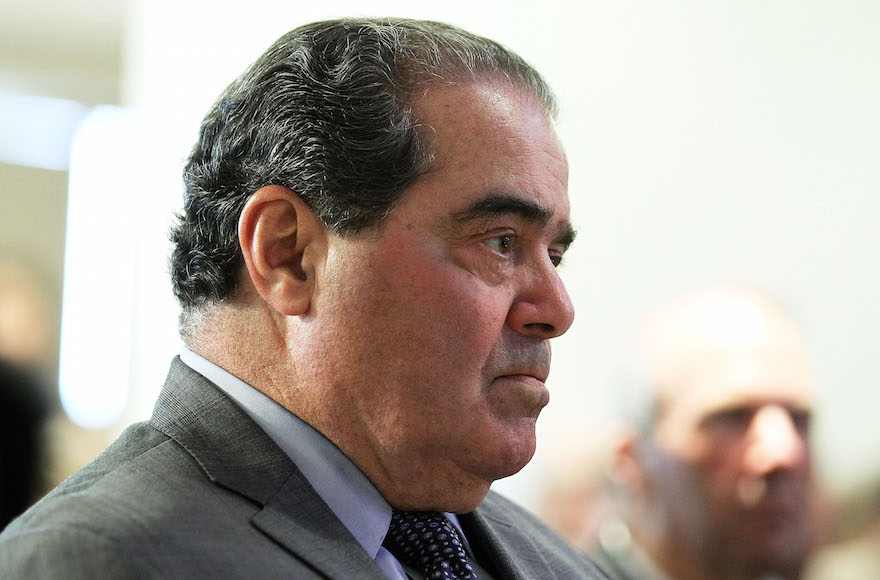 WASHINGTON (JTA) — With the sudden passing this weekend of Justice Antonin Scalia, the Supreme Court is now split 4-4 between liberals and conservatives, throwing into doubt how the court will rule on a raft of cases — including several watched by Jewish organizations.

Scalia, who was 79, is being mourned by Orthodox Jewish groups, which embraced his robust originalist doctrine, as well as Jewish church-state separation advocates, who railed at some of his decisions but admired his sharp wit and dedication to upholding the Constitution.

Jewish groups are also monitoring with concern the emerging political battle: President Barack Obama has pledged to nominate a replacement and Republican leaders in the Senate are vowing not to consider a replacement until a new president takes office next year.

“This was a person who looms large in American society,” Rabbi Jonah Pesner, who heads the Reform movement’s Religious Action Center, said Monday in an interview. “It’s initially about mourning his death, but it’s also about affirming democracy.”

Officials at Jewish organizations outlined six cases with implications for the Jewish community that may turn out differently absent Scalia’s fifth conservative vote.

In 2013, the Obama administration allowed faith-based employers to work around the contraceptive coverage mandate in the Affordable Care Act, or Obamacare. Under the system, religious nonprofits — for instance parochial schools — could refer employees to outside insurance agencies for such coverage.
A number of religious organizations have since argued that the mere fact of filling in a government form that would allow employees to get contraceptive coverage elsewhere violates their rights.

Zubik v. Burwell consolidates seven challenges to the mandate. Before Scalia’s death, a 5-4 conservative majority seemed the likeliest outcome based on the 2014 Hobby Lobby case, which allowed closely held companies to reject the contraceptive coverage mandate and split the court along conservative-liberal lines.

A split decision would allow the seven lower court decisions to stand. That would be chaotic since they had a range of outcomes, some favoring and some opposing the Obama administration.

“If [Justice Anthony] Kennedy votes with conservatives, we’ve got a mess,” said Steve Freeman, the director of legal affairs for the Anti-Defamation League, which has filed an amicus, or friend-of-the-court, brief on the government’s side.

Liberals are hoping that Kennedy, the conservative who most often swings to the liberal side, may do so in this case. They cite his opinion concurring with the majority in the Hobby Lobby case, in which he lauded the very opt-out form under consideration in Zubik v. Burwell as “an existing, recognized, workable, and already-implemented framework to provide coverage.”

Nathan Diament, the Washington director of the Orthodox Union, which has joined an amicus brief backing the plaintiffs, said judicial flexibility could also go the other way. One or more of the liberal justices who bristled at the notion that private businesses had religious beliefs in Hobby Lobby might not be so opposed to the charitable groups represented in Zubik v. Burwell, he said.

“You’re talking about nonprofit charitable religious organizations,” Diament said. “You could imagine it swinging the other way.”

This is the latest case to test the “Blaine Amendment” laws passed in 37 of 50 states banning their governments from funding religious institutions.

Liberals tout the laws as necessary protections against religious encroachment on public life. Conservatives note that the laws were passed largely owing to anti-Catholic bigotry toward the end of the 19th century as a means of keeping parochial schools from being funded.

In this case, a Missouri Blaine Amendment is keeping a church from benefiting from a state program that recycles tires into rubber used to repave playgrounds, making them safer.

On paper, it looks like a 4-4 split, which would keep the church from accessing the program, as lower courts have ruled for the state. That would be “good news for the ADL,” said Freeman, which has filed an amicus brief on behalf of the state.

But Marc Stern, the general counsel to the American Jewish Committee, which has backed the church in an amicus brief, suggested Justice Stephen Breyer, the Jewish judge who has at times broken with fellow liberals on the court and decried church-state separation overreach, could side with the conservatives here.

Diament, whose O.U. is also planning an amicus brief, agreed that liberals might cross over in this case.

“We would hope you could have more than five justices striking down that Blaine Amendment,” he said.

The program works this way: The top 10 percent of any graduating high school class in Texas is automatically admitted to the university, making up 75 percent of a freshman class. The remaining 25 percent are admitted through what the university calls a “holistic” system that takes race into account.

Abigail Fisher, the plaintiff, a white student who was not in the top 10 percent of her graduating class and did not qualify by “holistic” standards, says she suffered discrimination because of her race. Backed by groups that seek an end to affirmative action, she appealed again to the Supreme Court.

The ADL, the AJC and a number of Reform groups have filed amicus briefs backing the university consistent with the position long held by Jewish groups opposing race-based quotas, but favoring broad-based programs that advance diversity.

Justice Elena Kagan recused herself in 2013 and is doing so again in this case; as Obama’s solicitor general in 2012, she filed an amicus brief favoring the university when the case was in a lower court.

Without Kagan, when Scalia was alive, the university appeared headed for a 5-3 defeat. The court’s conservatives have long seemed to be itching to strike a blow against affirmative action, and Scalia made headlines when he wondered in December during oral arguments whether black students do better at “less advanced, slower track” schools.

The conservative majority remains in place at 4-3, but the ADL’s Freeman said a shrunken seven-judge court might be reluctant to rule sweepingly and could favor a narrower ruling that would not have national implications.

The conservative activist plaintiffs in this case want Texas to apportion election district populations according to registered voters and not according to total population, which includes non-voters such as children, felons and non-citizen immigrants.

The Reform movement, the AJC and ADL have all joined briefs on behalf of Texas, favoring apportionment according to total population – a system that boosts the influence of urban areas, where non-voters are likelier to reside, and favors Democrats.

The judges seemed split during oral arguments in December along ideological lines. Scalia’s absence could mean a 4-4 vote, which would revert the decision to a lower court that has ruled in favor of apportionment according to total population.

Texas led 26 states last year in filing lawsuits challenging the Obama administration’s plans in late 2014 to add parents to a 2012 program that indefinitely defers the deportation of illegal immigrants who arrived in the United States as children.

Federal courts, heeding Texas and the other states, have put a hold on the program, which would apply to about 5 million undocumented immigrants. The Obama administration has asked the Supreme Court to consider whether the states have standing to bring the suit.

The Anti-Defamation League and the National Council of Jewish Women have joined an amicus brief defending the Obama administration’s prerogative in this case, and the AJC’s Stern said his group plans to as well. Stern also noted that because the lower courts have favored the states, this is one of the cases where Scalia’s absence is less consequential.

“We’ll be supporting the administration, but if the court splits 4-4, the technical result is to affirm the Court of Appeals,” which has upheld the states’ right to sue to stop the program, he said.

A federal appeals court has upheld a Texas law mandating regulations on abortion clinics that reproductive rights advocates say are onerous and aimed primarily at shutting down abortion access. Among these are requirements that the clinics establish formal relationships with hospitals within a 30-mile radius. Owing to the anti-abortion climate in the state, most hospitals have declined such relationships.

An array of Jewish groups, including the Reform movement, the NCJW and the ADL, have joined amicus briefs backing abortion providers.

Reproductive rights advocacy groups, before Scalia’s death, said the case could be as consequential as Roe v. Wade, the landmark 1973 ruling that expanded a woman’s right to an abortion. The NCJW had asked members to rally in Washington, D.C., on March 2, when oral arguments are scheduled.

Ahead of oral arguments, it’s difficult to assess which way the justices are leaning. Should they split 4-4, the case would devolve back to the 5th Circuit Appeals Court ruling upholding the law. Unlike a majority Supreme Court ruling, a split decision would not apply nationally and would only affect states covered by the 5th Circuit: Texas, Louisiana and Mississippi.