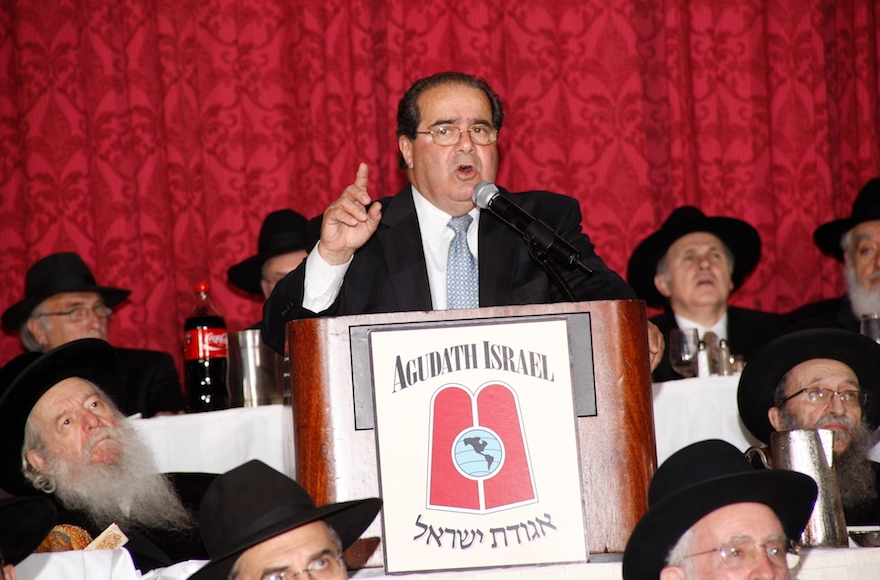 WASHINGTON (JTA) — Justice Antonin Scalia was a larger-than-life presence on the Supreme Court, where he championed a conservative judicial approach for three decades. He was found dead on Saturday at a resort in West Texas at the age of 79.

Scalia’s outsize personality left an impression off the bench, too. Here is how four Jewish leaders remember him, warmly or otherwise.

When Shabbat ended and I turned on my computer to see what had transpired during my weekly 25 hours off the grid, I was struck and saddened to read of the passing of Justice Antonin Scalia. While the lawyers among us debated Justice Scalia’s jurisprudential legacy, and while one of my esteemed colleagues at Agudath Israel of America spoke of how he had made both positive and negative contributions to the cause of religious liberty, my thoughts turned to the time he addressed an Agudath Israel annual dinner at the New York Hilton.

The famed journalist Seth Lipsky, writing in The Sun and Haaretz, also remembered that night in 2008.

“It was a glorious sight,” wrote Lipsky, recalling the multi-tiered dais populated by dozens of distinguished rabbis, “and Scalia delivered the sort of remarks for which he is so widely appreciated by religious Americans. His key point was the Founders of America had not intended the First Amendment to exclude religion from the public square.”

Justice Scalia didn’t limit his observation to matters of jurisprudence. He also spoke as a simple American of faith, about how G-d-consciousness was the greatness of our country.

He quoted Justice William Douglas, one of the Supreme Court’s most liberal members – “no conservative … he” – as asserting about Americans that “We are a religious people, whose institutions presuppose a Supreme Being. When the state accommodates its schedule to the religious needs of our people, it acts in the best of our traditions.”

And the justice cited references to G-d and religion in the words of the Founding Fathers, noting that Thomas Jefferson, so often identified with the separation of church and state, nevertheless clearly made repeated reference to G-d and Divine Providence.

Most memorably, Justice Scalia recounted to the large crowd how, at the time of the Sept. 11 attacks, he was in Europe for a conference. And how, the next day, he was approached by a European jurist who bemoaned the fact that no leader of his own country could ever have ended an address to the nation as President George W. Bush had concluded his solemn remarks that day, with the words “G-d bless America.” That observation, said the justice, captured the special nature of American society.

In many ways, American society is in flux. The confluence of new technology, social change and demographic shifts is bringing new mores, ideas and opportunities to bear on life in these United States. Like all upheavals, some change is salubrious, some less so. A major mediator of societal change in our nation is the Supreme Court. And one of its wisest, most prudent and truly courageous voices is now silent.

In 1999, Justice Antonin Scalia spoke at the plenum of the Jewish Council for Public Affairs. His address was witty and erudite, entertaining even. Afterward he agreed to take questions from the audience.

I think I got to ask the second question. At that time, the media was beginning to pay attention to the shockingly low representation of women and minorities among Supreme Court clerks.

I very politely said something like, “There’s a move to make sure that the composition of the Supreme Court legal staff better reflects the diversity of America. Can you speak to this?” Justice Scalia turned off the charm immediately, and he aggressively and nastily asserted that there should not be quotas in hiring Supreme Court clerks because they need the “best and the brightest.”

Instead of sitting down, I followed up by saying the best and the brightest included many women and minority candidates. I don’t recall my exact words, but I am certain I delivered them in a very respectful tone without any edge. Immediately he turned on his heels and said “no more questions” and left. The male lawyers who had their hands up to ask questions gave me the evil eye.

Surely, Justice Antonin Scalia had no anti-Jewish prejudice, as his close personal friendship with Justice Ruth Bader Ginsburg and his warm relations with other Jews attest.

Whether he was “good” or “bad” for the Jews depends on which Jews you ask. Jews themselves disagree over choice on abortion, government funding of religious schools, whether religious symbols belong on public land and same-sex marriage. Today they don’t even all agree that the United States should recognize Jerusalem as the capital of Israel.

Justice Scalia’s views on these matters — abortion is not constitutionally protected, many types of government aid to religion are permissible, religious symbols may be displayed on public land and the government is under no constitutional duty to recognize same-sex marriage — find favor with a minority of Jews. His opinion that Jerusalem should be acknowledged as Israel’s capital would probably be favored by a large majority.

This is a case where evaluating a public career through a Jewish prism is misplaced. It would be more appropriate to evaluate Justice Scalia’s views on constitutionalism and the judicial role as they impact the whole nation.

In his opinions, his questioning of lawyers from the bench and his public addresses, Justice Scalia forced his colleagues on the court and the American people as a whole to confront large, difficult, ongoing questions about the Constitution and the role of the judiciary in relation to the legislative branch, administrative agencies and the executive. One does not have to like his answers to appreciate the importance of the questions, and the fact remains that his critics have yet to offer a comprehensive and fully satisfactory account of their very different vision. We have all been enriched by his insistence on challenging us, and we are therefore all impoverished by his death.

I was having lunch with a friend at Eli’s, a kosher restaurant in Washington, D.C., one weekday afternoon when Justice Antonin Scalia walked in with a group of clerks. It was quite a diverse crowd; one was wearing a kippah. Justice Scalia chose the restaurant so everyone would have a full choice from the menu.

Justice Scalia was a member of a weekly poker game on Friday nights. Among the other players was the father of a friend and congregant (himself not particularly observant), a man well-known in the arts and as the father of three very accomplished kids.

The gentleman died unexpectedly, and I was called on to conduct the funeral. After the chapel service, a modest number of people joined us graveside for the burial. I explained the custom of filling the grave, and the mourners lined up to participate by placing earth on the casket, including Justice Scalia. I also explained using the back of the spade to indicate our reluctance to take leave of a loved one — and he did it.

Afterward he sought me out to thank me for the opportunity; the deceased was a dear friend and he found meaning and comfort in being part of creating a respectful memorial to him.

There is no overlooking his legal perspective, but neither should it be overlooked that Justice Scalia believed that a life framed by principle and compassion was by far the most important thing, especially if freely chosen.