Holland to ban export of kosher and halal meat 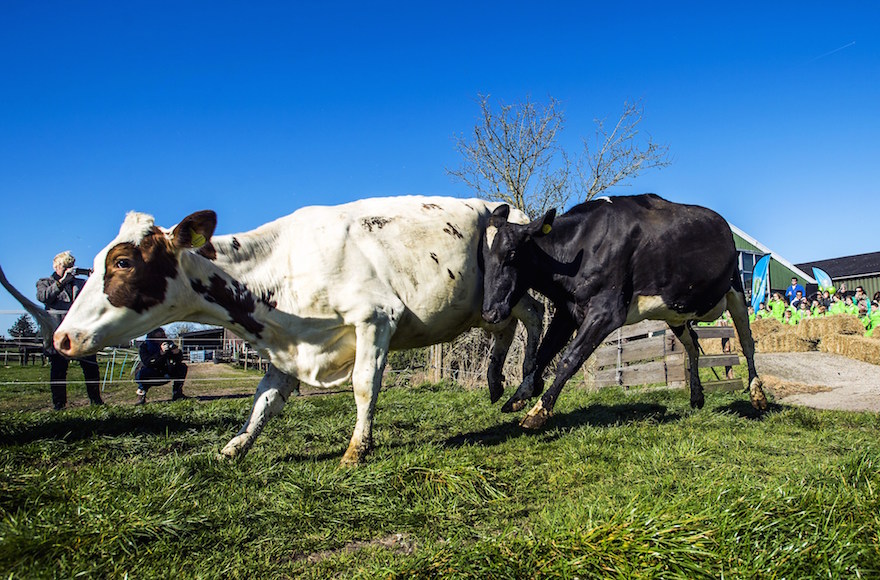 Cows running and prancing as they enter a meadow of a farm in Westzaan after a winter indoors, The Netherlands, March 20, 2014, (Remka de WaalAFP/Getty Images)
Advertisement

AMSTERDAM (JTA) – The Dutch government said it plans to limit ritual slaughter through new measures, including a ban on the export of kosher and halal meat.

On Wednesday, Agriculture Minister Martijn van Dam announced the plan in a letter to the Tweede Kamer, the lower house of the Dutch parliament.

In addition to the ban on exporting kosher and halal meat, the new measures will make the production of such meat subject to the discretion of officials from the Netherlands Food and Consumer Product Safety Authority. Last year, the authority urged the government to ban ritual slaughter outright, claiming it was inhumane.

The Netherlands does not export significant amounts of kosher meat.

Nearly four years ago, the Dutch government reached an agreement with Jewish and Muslim leaders setting certain standards for ritual slaughter, including a 40-second limit on the time between stunning of the animals before their necks are cut. The agreement, known locally as the covenant on slaughter, also said officials will carry out research-based consultations with faith community leaders on how to balance animal welfare with religious freedoms.

The covenant was signed following the Dutch senate’s scrapping in 2012 of a law passed by parliament the previous year banning all slaughter without stunning.

Religious laws in Islam and Judaism require animals be conscious when their necks are cut.

While the covenant addressed some details, since its signing “the setting of general regulations has not taken place,” van Dam wrote, because of lacking documentation – which has since been performed, including by the food authority.