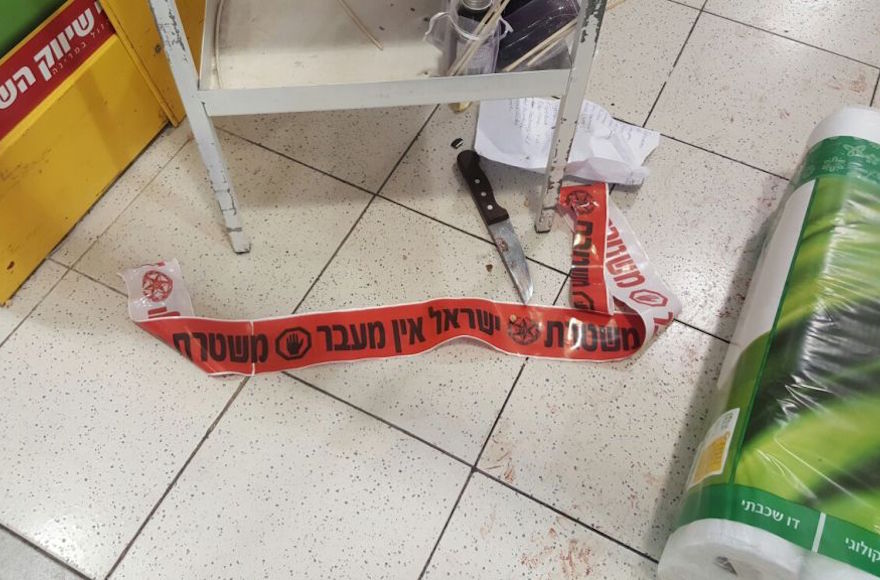 One of the knives used in a stabbing attack at a supermarket in the Shaar Binyamin industrial park, north of Jerusalem, Feb. 18, 2016. (Israel Police)
Advertisement

JERUSALEM (JTA) — An Israeli man was killed and a second seriously injured in a stabbing attack at a West Bank supermarket.

The victims, 21  and 35, were attacked Thursday afternoon at the Rami Levi supermarket in Shaar Binyamin, north of Jerusalem. The 21-year-old died of his wounds that evening at a Jerusalem hospital.

The suspected assailants are Palestinian boys aged 14 and 15 from the West Bank town of Beitunia, near Ramallah, Israel Police said. They were shot and injured by an armed civilian bystander, according to the Israel Defense Forces. Paramedics treated the alleged assailants at the scene before they were taken to the hospital, the IDF said.

The police said the teens had spent about 20 minutes in the store before carrying out the attack.

The Rami Levy chain is known for hiring Jewish and Palestinian workers in its West Bank stores, as well as catering to both Jewish and Arab shoppers.