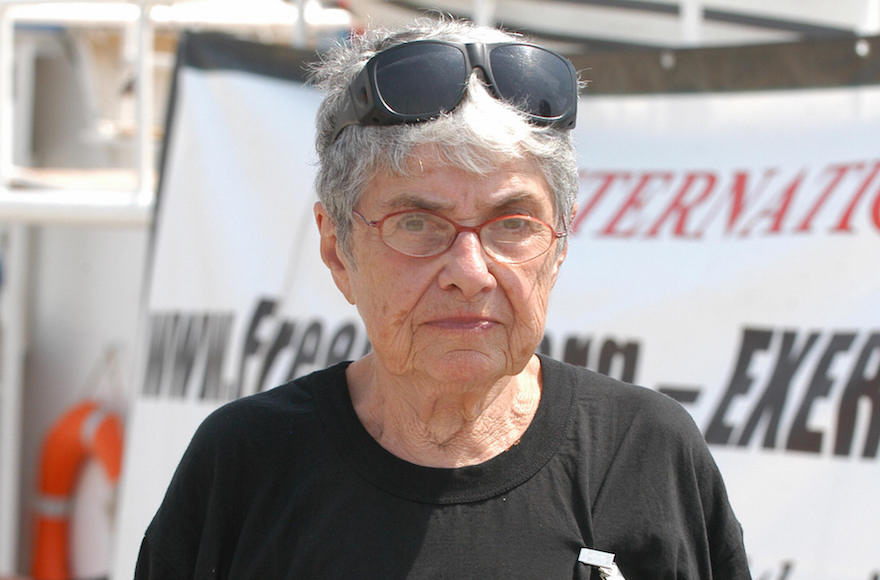 Holocaust survivor Hedy Epstein wearing a T-shirt with the Arabic slogan 'Gaza on my mind' encircled with a drawing of barbed wire, posing in front of one of the peace boats docked at the southern Cypriot port of Larnaca on their way to the Gaza Strip, Aug. 21, 2008. (Stefanos Kouratzis/AFP/Getty Images)
Advertisement

In invitations sent out Friday by the office of the president of the Austrian parliament, Epstein, who has likened Israel to Nazi Germany, was described as a peace and human rights activist. She is the only Jewish guest slated to speak at the event, scheduled to take place March 8.

The ADL in 2005 listed statements made by Epstein, who was born in Germany and spent most of World War II in Britain, first among examples of anti-Israel campus activism that “would meet both the United States government’s and [Natan] Sharansky’s definitions of anti-Semitism.” The ADL statement was in response to a lecture given by Epstein in 2004 at Stanford University, in which she compared the Nazi treatment of Jews to Israeli treatment of Palestinians.

Epstein has participated in several actions to break Israel’s blockade of the Hamas-run Gaza Strip and has signed numerous petitions by the boycott, divestment and sanctions movement against Israel.

Born in Germany in 1924, she left the country in 1939 on a Kindertransport — the name for efforts to rescue European children of the era to the relative safety of Britain — where she spent the war years.