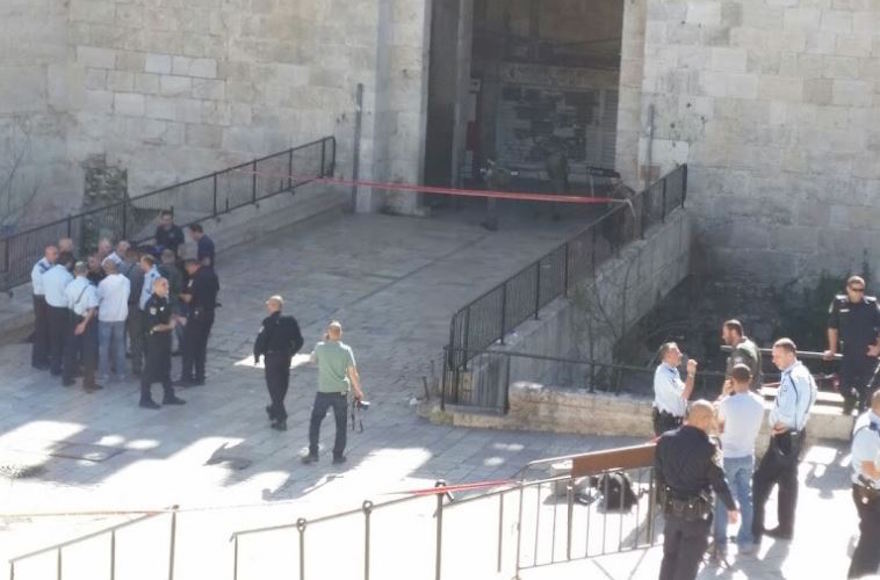 Security officers gathering at the scene of an attack at the Damascus Gate of the Old City of Jerusalem, Israel, Feb. 19, 2016. (Magen David Adom)
Advertisement

Muhammad Abu Khalaf, 20, from the town of Kafr ‘Aqab in northerneastern Jerusalem, stabbed two Border Police officers at Damascus Gate in the Old City of Jerusalem, wounding one moderately and one lightly before he was shot dead Friday morning, police said.

A bystander, identified as a 50-year-old Palestinian Jerusalem resident, was also lightly wounded from ricochets caused by the shots fired at the assailant, Israel Radio reported.

Later Friday, troops near Ramallah shot and killed a man identified as Abed Hamad by the Ma’an news agency, whom they said tried to run them over with his car. No Israelis were wounded in that incident.

Shortly before the attack, Hamad posted a photo of his mother and father on Facebook with a caption reading: “The two most beautiful [people] in the world, my soul remains with them.” He also wrote: “Mom don’t cry over me, I need your prayers. Dad, may you be satisfied with me; you have brought up a man.”

On Thursday, an Israeli soldier was killed and a second seriously injured in a stabbing attack at a West Bank supermarket.

The victims, 21 and 35, were attacked Thursday afternoon at the Rami Levi supermarket in Shaar Binyamin, north of Jerusalem. The 21-year-old, Tuvia Yanai Weisman, died of his wounds that evening at a Jerusalem hospital and was buried Friday on Mount Herzl in Jerusalem. A soldier in the Nachal infantry brigade, he is survived by his wife and 4-month-old daughter.

The suspected assailants are Palestinian boys ages 14 and 15 from the West Bank town of Beitunia, near Ramallah, Israel Police said. They were shot and injured by an armed civilian bystander, according to the Israel Defense Forces. Paramedics treated the alleged assailants at the scene before they were taken to the hospital, the IDF said.