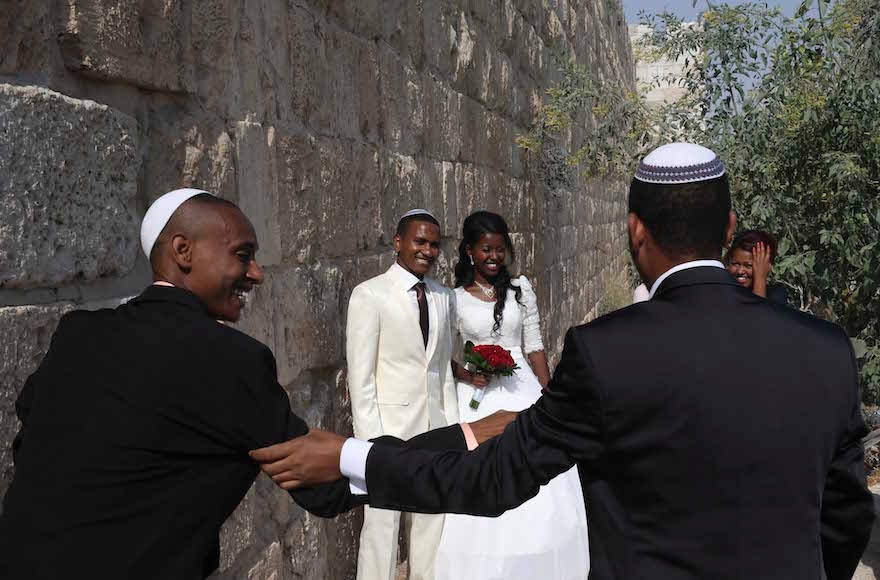 An Ethiopian Jewish couple posing for a wedding photographer outside the Old City of Jerusalem, Israel, Aug. 13, 2013. (Nati Shohat/Flash90)
Advertisement

In a conversation last week with the registrar that was secretly recorded, Shega said that despite presenting the paperwork proving she had converted to Judaism, the registrar asked her to provide a letter from a rabbi attesting to the fact that she was a practicing Orthodox Jew. He then suggested the couple register in her groom-to-be’s home community.

“I don’t understand,” the woman told The Jerusalem Post later on Monday. “I presented the forms and approvals from the rabbinate of Jerusalem, and that’s not enough for the rabbi of Petach Tikvah, but approval from a rabbi of my ethnicity will satisfy him? They know that my wedding date is imminent, and in any event they are trying to make it difficult for me.

“Would a secular woman have received the same barrage of questions, or is it because of the color of my skin that I am subject to this embarrassing mask of questions?”

Tzohar, an organization made up of religious Zionist rabbis who aim to bridge the gaps between religious and secular Jews in Israel, condemned the rejections.

“There is no way to excuse this disgraceful action aimed against dozens of couples who wanted nothing other than to register for marriage in their hometown,” the group said in a statement. “This is by no means the first time that this Rabbinate has acted in such a dismissive manner against couples who came to marry according to the local and halachic laws, and we have already seen numerous cases where the Petach Tikvah Rabbinate has rejected conversions performed by the Chief Rabbinate.”