Why Israel is a pilgrimage site for birds — and birdwatchers HULA VALLEY, Israel (JTA) — Thousands of cranes sit in pairs in a field here, their outlines approaching the horizon. Then, all at once, they take flight, a cloud of black-and-white feathers filling the sky.

Shai Agmon isn’t interested in most of these. All he cares about is one pair near the front, slightly shorter than the rest. Most of the birds are common cranes, but these two are demoiselle cranes — a rare find in these parts.

“They can’t sleep in the desert and can’t stop in southern Israel,” said Agmon, director of the Hula Valley Avian Research Center for Keren Kayemeth L’Yisrael-Jewish National Fund, which manages the valley’s birdwatching park. “Here they have food and a safe place to rest.”

With 300 bird species passing through each year, the Hula Valley in northern Israel is one of the prime birdwatching spots in a country that has gained a reputation as a mecca for birdwatchers. With a location at the nexus of three continents, and a climatic diversity that ranges from arid desert in the south to a cooler mountainous region in the north, Israel draws about 500 million birds annually from 550 species. The entire continent of North America, which is 1,000 times Israel’s size, sees barely twice as many species.

Israel’s unique geographic features – it is also one of the last green spots before the adjacent Sinai and Sahara deserts – has also made it a destination not only for birds but for people who live for the thrill of identifying a rare species perched on a branch or lake.

“The more I go see places in the world, the more I see how much richness of nature I have in Israel, and some of it is so close to home,” said Yuval Daks, a bird photographer for the Society for the Protection of Nature in Israel. “It’s hard to compete with the richness of Israel because we have so many climates. We have the desert, [Mount] Hermon.”

For the estimated tens of thousands of birdwatchers who come to Israel every year, the must-see sites aren’t the Western Wall or Masada but the Hula Valley and the Eilat Birdwatching Park. Sometimes armed with telephoto lenses, birdwatchers will wake up before dawn and drive for hours to find a species.

When they’re successful, the experience can be electrifying. Dan Alon, director of the Israel Ornithological Center, recalled being overwhelmed the first time he encountered a flock of 200,000 honey buzzards in 1984.

“It filled the sky,” Alon said. “You couldn’t see the sky. You can’t forget that. I love birds. I love this world. I find new things all the time.”

The Hula Valley became a prime birdwatching spot by accident. Drained of its swamps in the 1950s, the valley was re-flooded four decades later when KKL-JNF realized the drainage had damaged the local ecosystem. Farmers began planting corn and peanuts in the newly re-moistened soil — exactly the crops cranes like to eat. 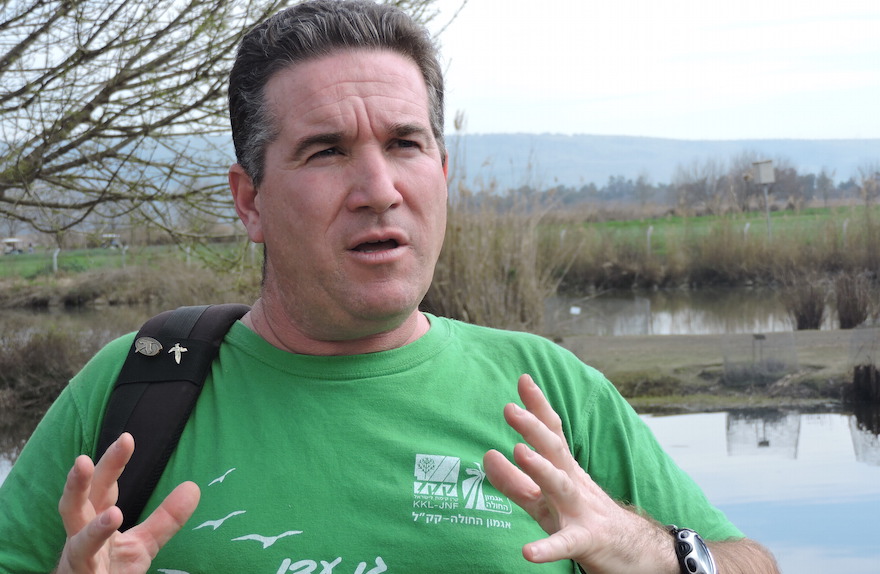 Soon, rather than just pass through the valley, 30,000 cranes stayed there every winter, feasting on the crops and sleeping perched in an artificial lake. Now, to protect the farmers’ livelihood, the government feeds the cranes up to eight tons of corn a day.

KKL-JNF is setting up six birdwatching parks throughout Israel in an effort to draw birdwatchers to sites across the country. Every year the society holds Champions of the Flyway in Eilat, in which international teams compete to see how many different species they can spot in one day.

“We’re not going to manage nature,” said Yaron Charka, KKL-JNF’s chief ornithologist. “The most important thing is that there will be interesting birds that come here naturally.”

Some of Israel’s birdwatchers have done more than just look at the winged creatures. Yossi Leshem, director of the Israel-based International Center for the Study of Bird Migration, set up a radar system that detects bird migration patterns to avoid crashes that could down Air Force jets. Leshem pioneered the use of mice-eating birds like kestrels and barn owls as a means of pest control. And he has helped Israeli schoolchildren learn geography by studying bird migration patterns.

“What’s important to me is to preserve nature,” Leshem said. “So I looked for some applied area that’s not just theoretical.”

Some birdwatchers, however, prefer Israeli activists to leave the country’s avian ecosystem as is. Clive Bramham, an avid American birdwatcher who lives in Norway, has visited Israel twice — in 2002 and a decade later. The first visit, with less infrastructure and fewer crowds, was more pleasant.

“You want access, but you want the real experience,” Bramham said. “The Hula was exciting, [but] I would not go there on a Saturday. I would not do that again. There’s more traffic on the weekend. If you really want to see the birds, get there early.”