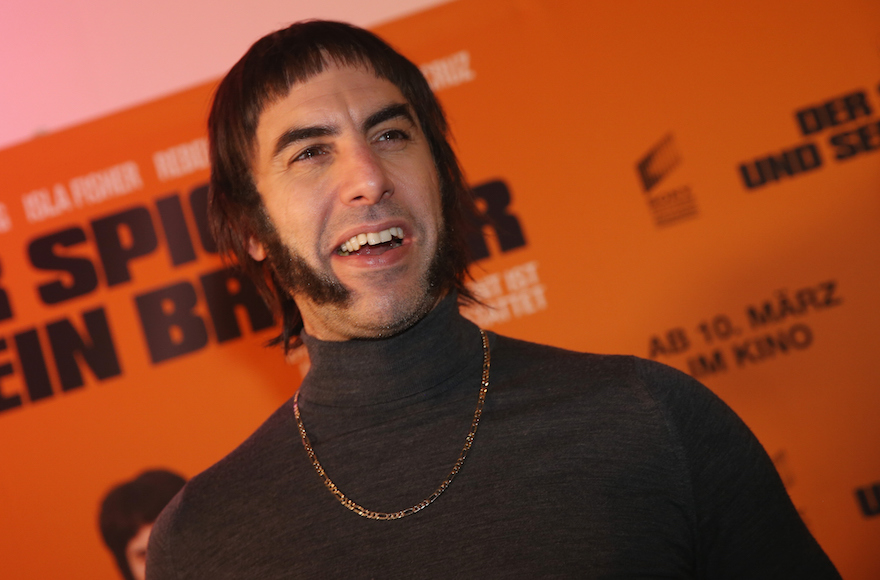 In an unusually candid Jewish-themed interview on Monday’s nearly two-hour “WTF with Marc Maron” podcast, Baron Cohen, 45, said he and his older brother as teenagers did a routine that he jokingly called “The Schvitzing Brothers.”

“I was about 16, and we would dress as Hasidic Jews and sing Jewish songs. And one of the songs was this song called ‘Schvitzing,’ which was about how these Hasidic Jews get so hot that they end up shaving their beards and taking their clothes off and actually converting to Christianity at the end. And it would go down terribly. I mean these old-age homes would hate it,” Baron Cohen told Maron, a fellow Jewish comedian.

But Baron Cohen said he was “discovered” doing the routine, which emerged from sketches he wrote in the Zionist youth group Habonim Dor, and given a comedy show on British television.

“I started doing this cable show when I was 23. And it had about 40 viewers,” he said. “But I was doing these characters, and one of the characters was this early form of Ali G.”

Baron Cohen said his Jewish background helped him create Ali G, whom he described as an ethnically ambiguous British youth who wants to be African-American. 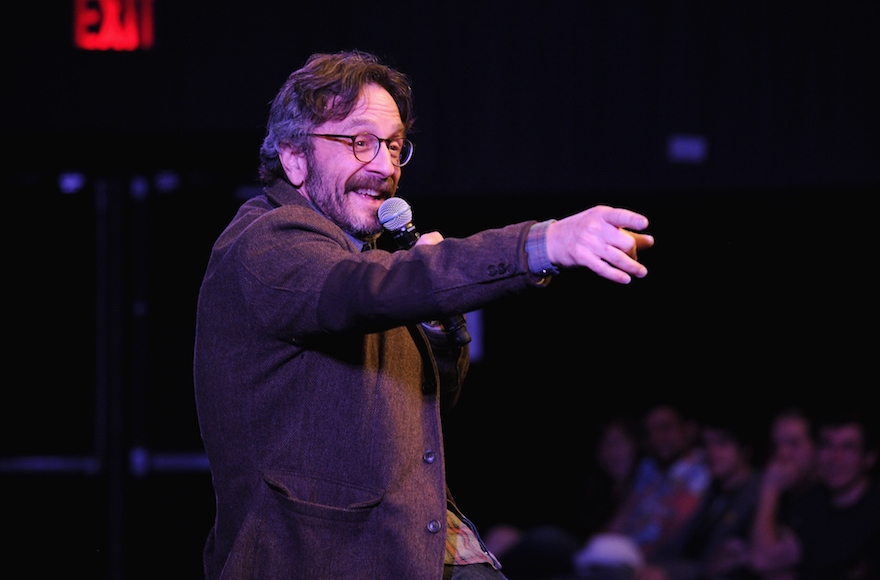 Baron Cohen was raised by Jewish parents in what he called a “pretty Jewish neighborhood, kind of middle class” in northwest London. His dad was an accountant, and his mom, who was born in Israel (to a German Jewish family that hated “Diaspora jokes”), taught exercise classes in the living room to “Jewish ladies from nearby,” he said.

“There was part of me that identified [with Ali G] as this kind of nebbishy kid who saw this rising movement of hip-hop,” he said. “And we fully embraced it. We got into the graffiti and the language. And so Ali G, as a result, I had a lot of knowledge about early hip-hop.”

When “Da Ali G Show” first appeared on British TV in 2000, Baron Cohen said, various ethnic communities laid claim to him — from Greeks to Pakistanis to blacks. After it came out that Baron Cohen was Jewish, though, he was accused of racism.

Having studied racism and Nazism as an undergraduate student at Cambridge University and marched against racists, fascists and neo-Nazis, Baron Cohen wanted to defend himself — but he held back, and it paid off, he said.

After a week of public debate, he said, the media concluded on their own that he wasn’t racist — and in the meantime, he had become a household name in Britain. Baron Cohen went on to international fame for Borat, Bruno and Admiral General Aladeen, among other characters. He is now promoting his new movie, “The Brothers Grimsby.”

As he described on “WTF,” Baron Cohen’s comedy has often been “undercover,” meaning he has stayed in character to provoke reactions from unsuspecting real people — often pushing the limits of free speech and putting himself in physical danger.

In the 2006 mockumentary “Borat,” Baron Cohen humorously exposed American racism and anti-Semitism. In one scene, Borat, a boorish Kazakh journalist (whose supposed native Kazakh is actually Hebrew), leads a bar in Tucson, Arizona, in a country Western rendition of “Throw the Jew Down the Well.”

Baron Cohen agreed with Maron that the bar patrons may not have hated Jews, but he said he was parodying their willingness to accept such hatred.

“I think it shows not necessarily that they’re anti-Semitic. But I think the dangerous thing is people who are indifferent about evil people,” he said, referencing renowned Holocaust scholar Ian Kershaw’s line: “The path to Auschwitz was paved with indifference.”

“How much does your Jewishness or your faith inform your way of thinking?” Maron asked Baron Cohen, who has family in Israel and reportedly spent a year on a kibbutz in northern Israel after high school.

“Well, I don’t think that much really,” Baron Cohen replied — a somewhat confusing response given the rest of the interview.

By way of explanation, he cited his undergraduate thesis on why so many Jews were involved in the American civil rights movement.

“My research and my conclusion was basically Jews in America at the time were the most liberal ethnic group, and they were probably the most activist group in any liberal political movement,” he said. “But really the kids who were getting involved weren’t getting involved as Jews.

“So I think I didn’t get involved in comedy or any of this stuff because I’m a Jew,” he said. “I think there’s probably some reason that Jews are over-involved in the comic community. I don’t know. I mean why are you involved? You think it’s because you’re Jewish?”

Maron responded, “There was a period where I separated myself from my Jewish identity. I refused to talk about being a Jew on stage because you wouldn’t necessarily know I was a Jew immediately, and I got very annoyed with the stereotype of the Jew, and I didn’t want to fall into that. Now I’m a little less worried about it. Like if I’m going to become an old Jew of some sort, I’ll take it.”