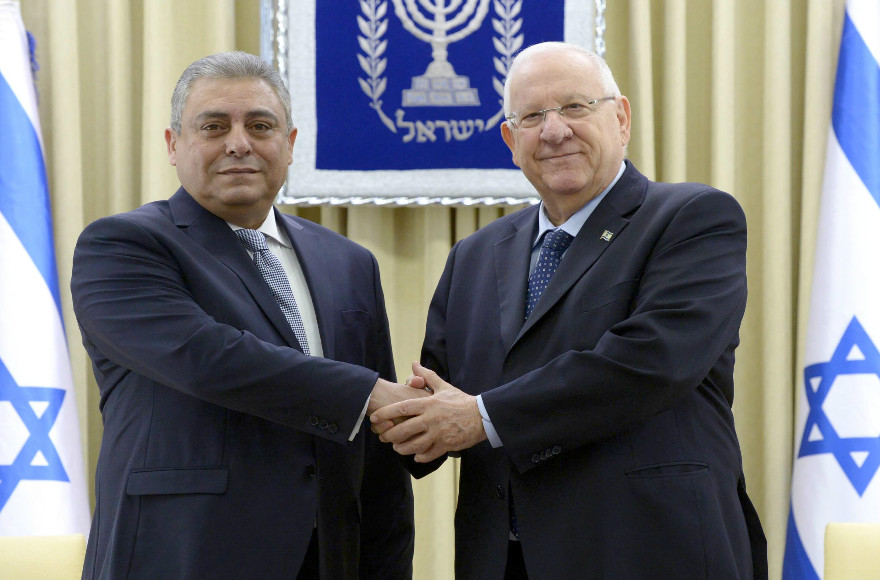 “We spoke in a constructive atmosphere regarding the urgent matters and agreed to work together to reach a comprehensive and just peace in the region,” the envoy, Hazem Khairat, wrote in Arabic in the official guest book on Thursday morning, according to the President’s Office.

In welcoming Khairat, Rivlin said Egypt plays “a most important role” in a difficult region.

“We have found a way to live together in peace and friendship,” he said. “This is a message to the whole region, and the whole world.”

Rivlin added: “The peace agreement between our countries is an international treaty and it is for both us a top priority. We may not agree on everything, but we respect each other and because of this we will build a shared future.”

Khairat arrived in Israel in January and was welcomed at the time by Israeli Prime Minister Benjamin Netanyahu.

“I welcome the re-stationing of an Egyptian ambassador in Israel, which will enable us to further strengthen relations with this important and key Arab country,” Netanyahu said.

Egypt’s last ambassador to Israel, Atef Salem, arrived in Israel and presented his credentials to then-President Shimon Peres in October 2012. He was recalled to Cairo a month later, days after Israel launched Operation Pillar of Defense in Gaza following continuous rocket fire on civilians in southern Israel from Gaza.

Israel named Haim Koren as its new ambassador to Egypt in September 2014. The Israeli Embassy was closed in September 2011 after rioting anti-Israel protesters broke down the 8-foot-high security wall surrounding the embassy compound and entered the building. Embassy employees had to be evacuated for their safety. Israel reopened the embassy in September.