New and improved Jewish camps for our Gilded Age 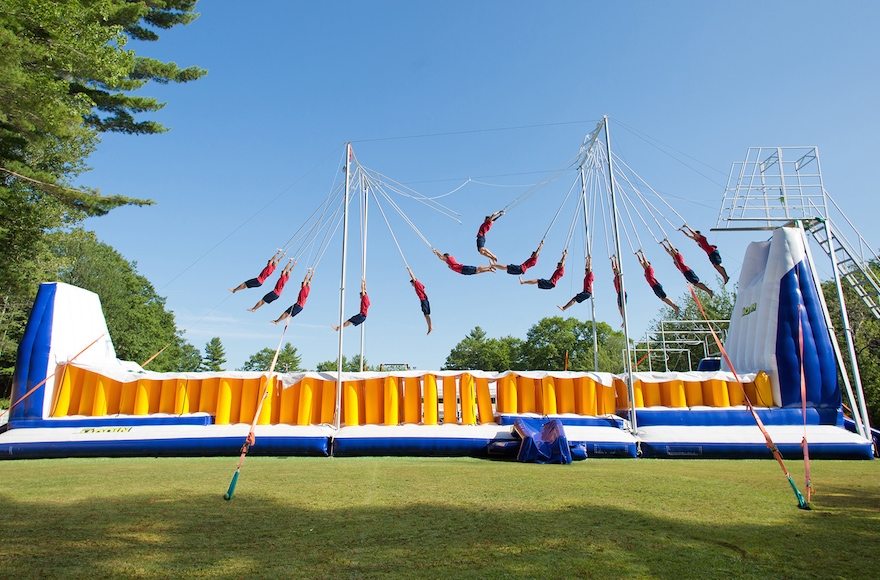 It's a bird... it's a plane... it's the new "trapeze center" at Camp Modin, the oldest Jewish summer camp in New England and the inspiration for the movie "Wet Hot American Summer." (Courtesy of Camp Modin)
Advertisement

(JTA) — At the oldest Jewish summer camp in New England, you can hike, swim, sail — and now fly through the air with the greatest of ease.

The Camp Modin “trapeze center” is the first of its kind in North America, a “revolutionary” design with a “state-of-the-art inflatable landing pad.”

The center is just part of a $350,000 expansion the camp completed last year, which also added a 10,000-square-foot, multi-purpose outdoor sports arena. The upgrades are the latest in the $12 million or so Modin has spent on new infrastructure over the past 20 some years, according to Howard Salzberg, who owns and directs the 95-year-old camp in Belgrade, Maine, with his wife, Lisa Wulkan.

“I don’t like to say ‘facilities’— it’s really about opportunities,” Salzberg tells JTA. “Kids want opportunities and parents want to know that you’re reinvesting in your camp.”

Its unique trapeze aside, Modin is not an exception: Jewish summer camps across the country are soaring to new heights, outlaying huge sums for upgraded amenities, specialty programming and even big-name talent.

The “luxification” of Jewish camps is not so much a trend as an accepted necessity that cuts across regions and movements.

“The market has changed,” says Len Robinson, CEO of NJY Camps, which serves 6,000 kids each summer in seven camps at two Pennsylvania sites. “Today’s family doesn’t look at camp the same way they did even 10 years ago. What was luxury is now below par.”

READ: With launch of new camps, the specialty sector is booming

Climate-controlled cabins are common; private baths have replaced shower houses; security, from cameras to armed guards, is a given. And whereas excursions used to mean backpacks and canoe paddles, campers now sometimes need passports.

“Any quality Jewish camp has to pay attention to improving its physical plant and its program constantly — otherwise, you fall behind,” said Jordan Dale, who has served three decades as executive director of Surprise Lake Camp, a nonprofit camp in Cold Spring, New York, that opened in 1902 as a summer escape for Lower East Side tenement kids.

Surprise Lake has “rebuilt or renovated virtually every building on the site” during his tenure, said Dale, adding a million-dollar gymnasium and, in time for this summer, a million-dollar pool.

“We work very hard to let people who have a historic impression of Surprise Lake understand that it’s light years ahead of where it was when they or their parents went to camp,” he said.

The board of directors has already approved another $240,000 worth of improvements to be completed over the next two years. 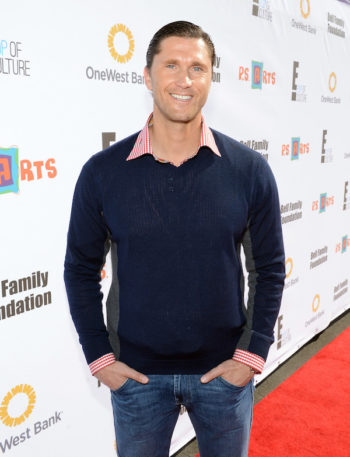 Irv Bader, owner/director of Camp Seneca Lake, the upscale modern Orthodox camp in Honesdale, Pennsylvania, he founded 42 years ago, says it’s always been his policy to upgrade every year, whether that means new bunks or basketball courts.

“Everybody knows,” he said, “and they always ask, ‘What are you doing this year?’”

“The bar is completely different,” said Jeremy Fingerman, CEO of the Foundation for Jewish Camp, which provides guidance and grants to more than 150 nonprofit camps in the U.S. and Canada. Families, he says, are looking for excellence in three areas: facilities, programming and professional leadership.

“Those camps that are investing in those are going to continue to win in the marketplace. There’s a lot of momentum in this field right now,” he said.

The “momentum” has been transformative — Modin’s Salzberg admitted people are surprised to learn his upscale oasis was the inspiration for the rowdy, ramshackle camp depicted in the cult film “Wet Hot American Summer.”

“That is an absolutely true depiction of many summer camps in the ’80s, especially Jewish ones — Modin was the dumpiest camp in the world, and I loved every minute of it,” said Salzberg, who took over as director in 1991. “But the days of the frumpy, falling-apart camps were coming to an end. We knew that if we didn’t improve the quality, we would not survive.”

Rather than shrink and die, the Jewish camps diversified and found their niche.

“Camps realize they’re not competing with each other because each is very different, and we encourage them to accentuate those differences,” Fingerman said.

Perhaps the most notable development, he said, is the rise in specialty programming. FJC’s Specialty Camp Incubator has helped launch nine new camps since 2010. Two more will open this summer: Ramah Northern California, with a focus on oceanography, performing arts and adventure sports, plus a Los Angeles branch of the popular URJ 6 Points Sports Academy in Greensboro, North Carolina.

Robinson also runs science programs in partnership with Ben-Gurion University in Israel, recruited world-class artists from Israel’s Bezalel Institute to oversee the art program and is investing $100,000 to revamp the kitchens this year for a new culinary institute led by “Kosher by Design” cookbook author Susie Fishbein.

Even overnights away from camp have become something more special, and some push the idea of an excursion to the max. Last year, the 10th-graders at Seneca Lake went to California and Hawaii. “The kids got to see a Bruno Mars concert [in California], which was great,” Bader said.

He hopes to renew another popular past trip — to China and Thailand. 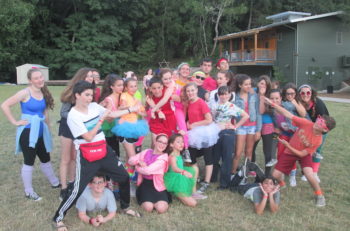 URJ Camp Newman is nearing the end of a $30 million overhaul. Though the facilities may have been spruced up, the “ruach” and camaraderie remain the same. (Courtesy of Camp Newman)

Some camps are starting to see long-developing strategic plans bear fruit. For example, in Santa Rosa, California, URJ Camp Newman is in the later stages of a $30 million overhaul that has replaced a majority of the housing and added additional conference and reception space, as well as a new health center. The final phase calls for a multipurpose dining hall and performing arts center.

The enhancements, according to executive director Ruben Arquilevich, were “essential”— not just to satisfy summer-camp parents, “who basically said, ‘you need to upgrade your facilities or we’re not sending our kids,’” but to bolster the camp’s  mission to provide an immersive Jewish experience for as much of the community as possible. (Off-summer retreats currently serve some 4,000 to 5,000 people; the goal is to reach 13,000 annually.)

In Georgia, Ramah Darom is in the midst of a capital campaign that will eventually add a new media arts studio, expanded trails and a black-box theater, as well as the leasing of adjacent agricultural fields as part of a vision to become a farm-to-table camp. Wisconsin’s Camp Herzl just capped off its own $8 million fundraising drive that, among many other improvements, will make the entire facility accessible under the Americans With Disabilities Act.

All of the sprucing up comes at a price for parents: Modin starts at $11,900 for a full seven-week session, with extra options available; Seneca Lake charges $10,175. Nonprofits are only marginally less for campers paying full fees: Six weeks at health-and-wellness-focused Camp Zeke runs $7,900, about the same cost for eight weeks at Surprise Lake, which awards more than $1 million in scholarships each year.

Of course, it isn’t just about the facilities; a camp is only as good as the quality of its staff and the cohesiveness of its experience. As Bader says,”It still boils down to the chemistry inside the bunk.”

Yet every director interviewed was more concerned about upgrading the bunks rather than filling them. For-profits and nonprofits alike say they are always looking at the next capital improvement.

Salzberg, for example, anticipates reinvesting at least a half-million dollars every year, whether it’s for new sailboats, an upgraded infirmary or any of a thousand unexpected expenses, such as a recent power outage in the middle of one summer.

“Now there’s a $90,000 campus-wide generator system to make sure that the brisket is always ready on time for Shabbat,” he said. “In my day, we just had flashlights.”

“It’s like the line from Pirkei Avot,” Arquilevich laughs. “The work is never complete, but neither can we stop pursuing it.”