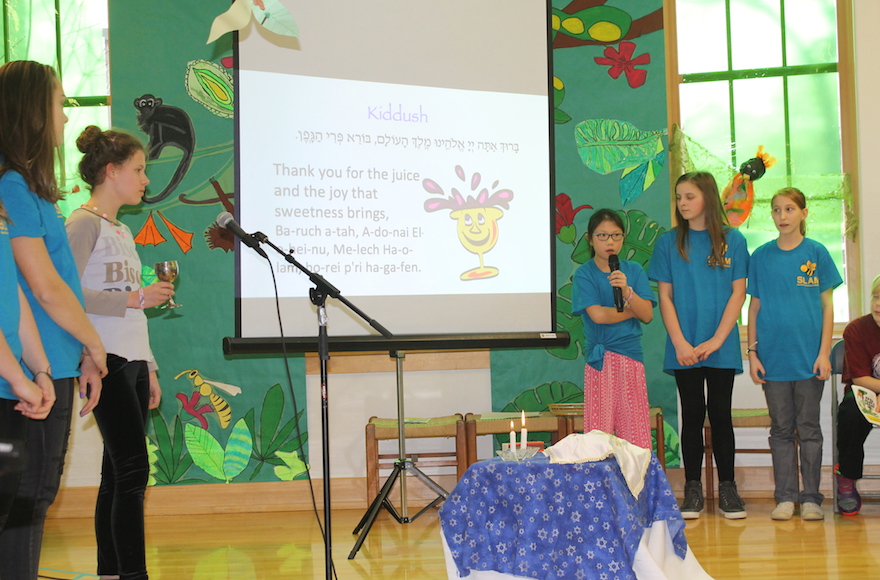 The McGillis School holds a weekly Shabbat celebration every Friday for students, 75 percent of whom are not Jewish. (Uriel Heilman)
Advertisement 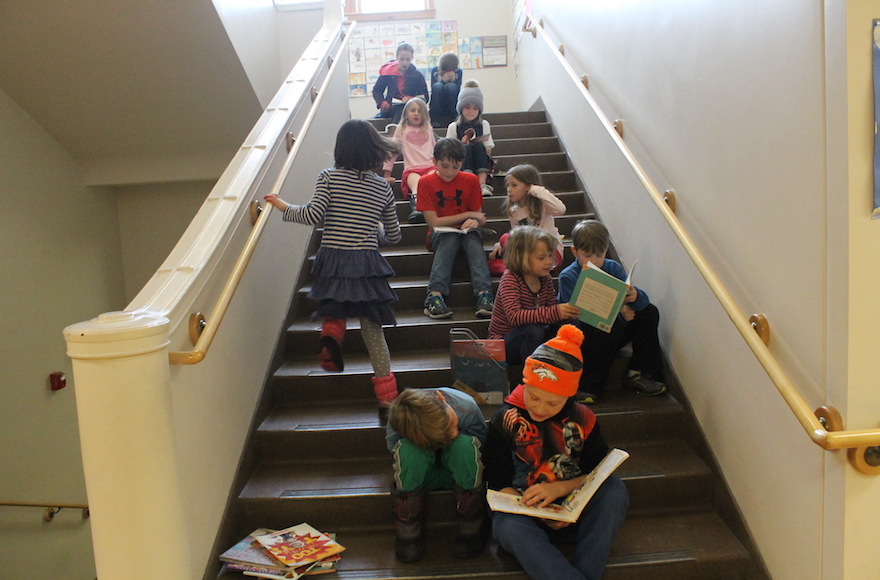 At least once a month at the McGillis School, older students take time out of the day to read stories to younger students. (Uriel Heilman)

SALT LAKE CITY (JTA) – It’s Friday afternoon at the McGillis School in Salt Lake City, and students from the third through fifth grades are gathered for the weekly Shabbat celebration.

They read and discuss a passage about humility by former British Chief Rabbi Jonathan Sacks. Then a blond girl with braided hair prepares to light the candles. A hush falls over the room as the flames are kindled, and the students recite the practiced benediction in unison:

“As we bless this source of light, the warmth these candles bring reminds us of times we gave light and received light,” they sing, followed by a recitation of the traditional Shabbat candle-lighting blessing in Hebrew.

The ceremony is not dissimilar from weekly Shabbat celebrations held in Jewish schools across America.

Except for one thing: The student lighting the candles isn’t Jewish. Nor is the one who follows her to recite the kiddush blessing over grape juice. Nor the one after that who recites Hamotzi over the challah bread.

“We have Muslims, Buddhists, atheists, Presbyterians, Lutherans and LDS students,” said head of school Matt Culberson, using the acronym for Latter-day Saints, or Mormons. “But this school takes Jewish culture as its foundational point. We start with Judaism first.”

The McGillis School holds a weekly Shabbat celebration every Friday for students, 75 percent of whom are not Jewish. (Uriel Heilman)

The outgrowth of a JCC early childhood program that morphed into an independent K-8 school about 15 years ago, McGillis may be the only American Jewish school of its kind. The vast majority of its students – 75 percent – are not Jewish, by the administration’s reckoning. And though McGillis teaches Jewish values, Jewish holidays and Hebrew, it does not teach Judaism as a religion.

While there are a few other Jewish day schools in the United States with significant numbers of non-Jewish students — even majorities — they are invariably led by Jews and teach Jewish religion. At McGillis, none of the administrators is Jewish, and only about 10 percent of the staff are Jews.

But walk into the school in midwinter and you’ll find McGillis’ main gathering space festooned for Tu b’Shvat, the Jewish Arbor Day. Mezuzahs are on every doorway alongside benedictions penned by the children. Student-made Hebrew art adorns the walls, and the hallways are lined with prints of Israeli landscapes.

Practically everywhere you turn, identical blue posters advertise the school’s guiding Jewish values: tzedakah (translated as “giving to others”); tikkun olam (“repairing the world”); gemilut hasadim (“doing good and kind deeds”); derech eretz (“having respect for all”); limud l’shma (“learning for the sake of learning”), and kehillah (“our community”). Students, teachers and administrators constantly reference these values, albeit sometimes straining to pronounce the Hebrew.

“We’re trying to teach Jewish values broadly,” said Liz Paige, the school’s ethics and cultures teacher. “Though they are in Judaism, they are universal, and we’re teaching them to a very wide community.

“We’re not proselytizing here. We’re teaching Torah as literature, philosophy, ethics – but not religion. When we say Adonai” – the Hebrew word for God – “it’s a placeholder. Insert what is appropriate for you here – God, nature, source of life. The students have to construct it for themselves.” 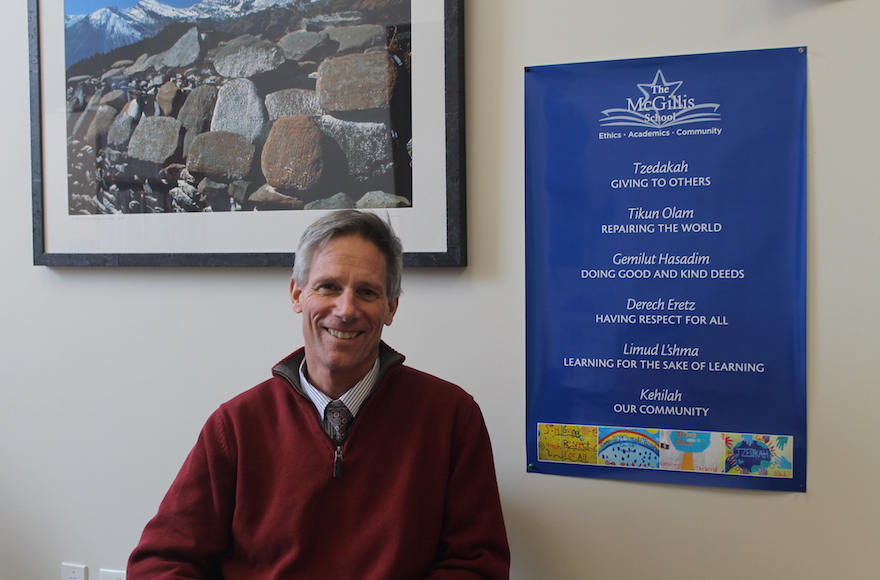 The McGillis School launched in 1990 as an extension of the Salt Lake City JCC’s early childhood program, which also welcomes non-Jews. At the behest of enthusiastic parents, a first grade was added, and then another grade. By the late 1990s, there were about 80 students in grades 1-6 at the school, then called the Jewish Community Center Elementary School and housed at Congregation Kol Ami, the city’s only non-Chabad synagogue.

In 2000, the school was renamed following a sizable donation from the McGillis family, and in 2002 it broke from the JCC and became fully independent. As the school has grown — it now has more than 400 students in grades K-8 and a $6 million annual budget — the proportion of Jewish students has fallen, from about 75 percent in the early years to 40 percent in the late 1990s to 26 percent today, according to Culberson. There is no other Jewish day school in Salt Lake, which has only a few thousand Jews.

“McGillis was never really exclusively Jewish because that model doesn’t work here other than at a synagogue,” said Alex Shapiro, executive director of the United Jewish Federation of Utah, which provides a small annual grant to McGillis.

As at other Jewish schools, Christian holidays are not celebrated or taught at McGillis. But the Jewish holidays are a major part of the curriculum. On the Jewish harvest festival of Sukkot, parents (mostly non-Jews) helped build the sukkah. The children made decorations, and teachers held some classes in the sukkah, teaching about the importance of gratitude and about harvest festivals in other cultures.

Ahead of Simchat Torah, the students made pictures illustrating the school’s Jewish values and taped them together to create a scroll. On Simchat Torah day (the school closes for some but not all Jewish holidays), parents, board members and teachers unspooled a Torah scroll borrowed from a local synagogue and connected it to the student-made scroll.

“We are doing Torah creation,” said Culberson, who is not Jewish. (As with many transplants to this mountain-flanked Utah city, Culberson jokingly describes himself as a member of the “Church of Seven-Day Re-creationists.”)

“You can be whoever you want here,” said Ria, an eight-grader. “I feel wholeheartedly Jewish even though I’m not Jewish.”

The non-Jews who come to McGillis are drawn by a variety of factors: Mormon dominance of local public schools, the school’s strong academic reputation and a desire for a small school with a close-knit atmosphere.

“The academics are strong, and our teachers are great and professional,” said Tim Brown, a McGillis parent and board member who is Jewish. “But a lot of people make the decision based on the sense of community created at the school. The Jewish stuff wasn’t a factor in our decision-making at all.”

Sofia, an eighth-grader, told JTA that when she started at McGillis in fifth grade, she didn’t know any Jewish people or anything about Judaism.

“I came here and I thought: Oh my God, what am I going to do?” she recalled.

But Sofia started to feel at home almost immediately.

“It doesn’t matter what you look like, or your beliefs — you just fit in,” she said. “And going to a Jewish school is a great way for us to expand our horizons and understand there’s more than one way to believe in God.”

Sofia will be going to a Catholic high school next year. Her classmate, Leslie, said she’s glad not to be in public school, where the Mormon majority “feels that they’re better than everyone else.”

Leana, a Jewish eighth-grader, said she likes not having to explain her religious identity at McGillis.

“I really think there is a replicable model here,” Culberson said. “I think it takes a big vision and people within the entire community being willing to give up a thing or two, but I think whatever gets given up is far more greatly rewarded with what is gained.”