Revisiting Ethiopian aliyah after 30 years through photos and film 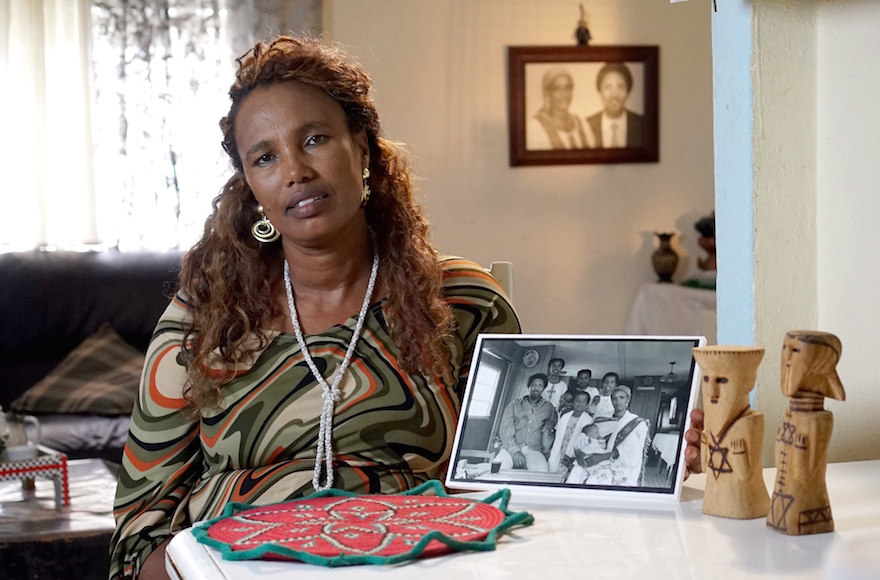 Nane Negate's father struggled with depression and killed himself shortly after arriving in Israel from Ethiopia in the 1980s. (Beit Hatfutsot)
Advertisement 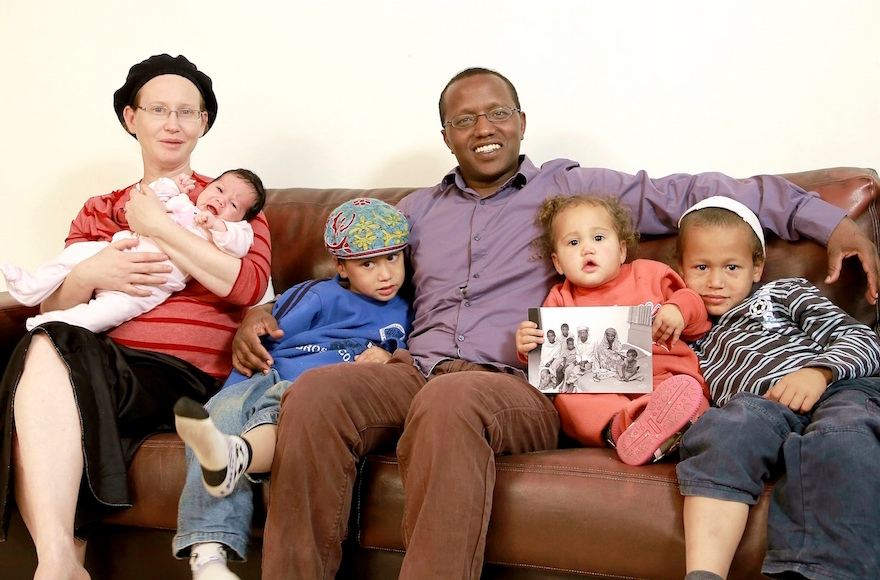 Shay Yossef and his wife, Efrat, with their children at their West Bank home in Har Bracha. (Beit Hatfutsot)

TEL AVIV — Orli Malassa doesn’t remember ever feeling anything but Israeli. To her parents, who came to Israel from Ethiopia in 1983 when she was 5 years old, Malassa’s accent-free Hebrew, fluent use of Israeli slang and effortless assimilation into the Jewish state has felt nothing short of a miracle.

“To this day, they are just amazed,” Malassa says of her parents’ attitude toward life in Israel. “It’s a prophecy coming true for them, and they are just so grateful.”

An estimated 120,000 Israelis of Ethiopian descent are now living in Israel, and a huge chunk of that population can trace their roots in the Jewish state to Operation Moses, a series of flights orchestrated by the Israeli government that airlifted thousands of Ethiopian Jews to Israel beginning in November 1984.

Malassa, who grew up in Beersheba and now works as a filmmaker in Tel Aviv, came to Israel before the operation at an age young enough that she lacks a foreign accent and many other markers of an immigrant. But the poised, bubbly 38-year-old’s skin is as black as her parents, meaning that no matter how effortlessly she negotiates Israeli society, she will always be identifiable as Ethiopian.

So when Beit Hatfutsot-The Museum of the Jewish People in Tel Aviv asked Malassa to spearhead an ambitious exhibition exploring the lives of Israel’s Ethiopian immigrants 30 years after Operation Moses, she understood she was being given carte blanche to also explore a piece of herself.

“Operation Moses: 30 Years Later” is based on the 1984 photographs of Doron Bacher, who created stunning black-and-white portraits of the new arrivals. Malassa selected 10 of Bechar’s photos and tracked down their subjects through Facebook. She then created an exhibition of photos and video about their lives today.

The exhibition will open this summer at the Beit Hatfutsot-The Museum of the Jewish People. Malassa says the project was both a chance for her to tap into her own culture and present a more honest, unfiltered representation of her community to the world.

“There is so much to be told about us. We have such a rich history,” she says. “The pictures we selected led me to the stories, but the individuals we chose – they told the stories themselves. And stories that are told from within will always be different than stories outsiders tell for them.”

Shay Yossef, 36, is an engineer and father of four who lives in the religious West Bank settlement of Har Bracha. His wife, Efrat, is a native Israeli. Despite his training, Yossef has struggled to find work as an engineer, so he makes ends meet by working as a security officer. 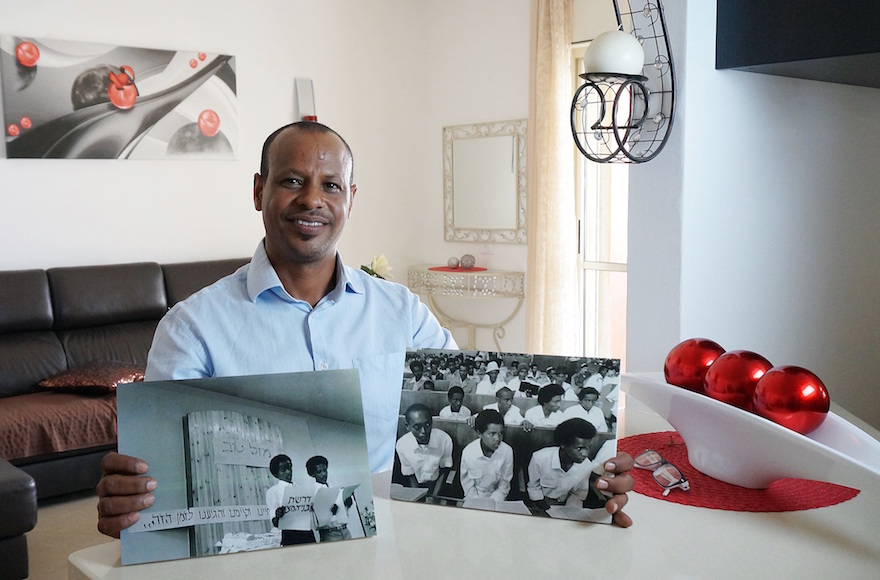 Radi Tamasa, 45, lives in Beersheba with his wife, Yaffa, and their four children. (Beit Hatfutsot)

Radi Tamasa, 45, a psychologist in the army reserves, lives in Beersheba with his wife, Yaffa, and their four children. To this day, Tamasa says, he hasn’t forgotten the emotion of the moment he arrived in Israel at the age of 14.

But despite his love for his adopted country, he continues to be shocked at the casual racism he encounters in Israeli society.

“The most difficult thing for Israelis is to encounter someone who is not like them,” he says. “Someone who is not – I hate to use this word but I don’t have a choice – who aren’t the same color.” 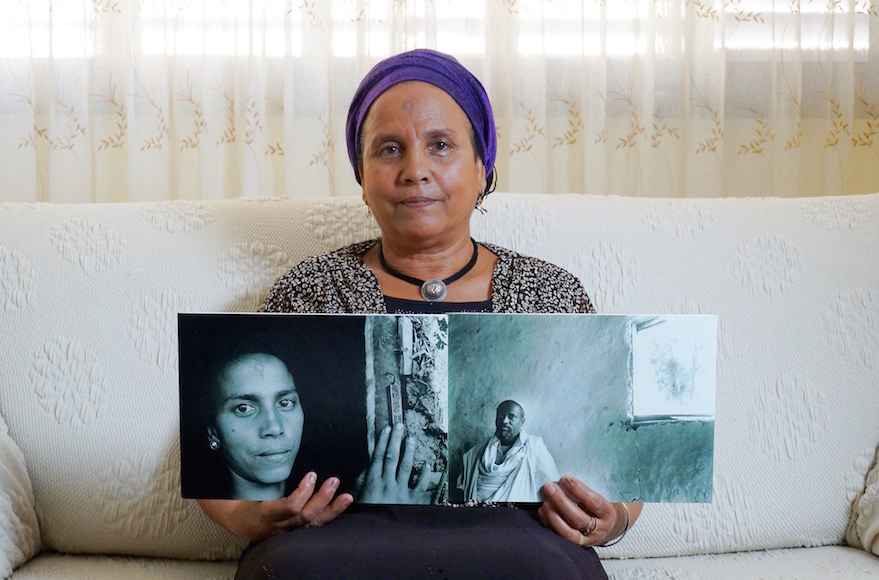 Abeba Brhan with a photo of her late husband Ababa. (Beit Hatfutsot)

Abeba Brhan, a 60-year-old widow who lives in Ashdod, was subjected to brutal torture in Ethiopia. In Israel, her late husband, Ababa, a rabbi, struggled to establish a congregation for his community but died in 2004 without fully realizing his dream. The couple’s son, Rabbi Moshe Baruch, is now carrying on his father’s mantle.

“She is standing next to her picture from 30 years ago thinking, for sure, if it was worth it,” Malassa says of Brhan. “She doesn’t say it but you can see it. So she is willing, with all the things that happened to her, to see the glass half full and her son is now also a rabbi, continuing her dad’s work.” 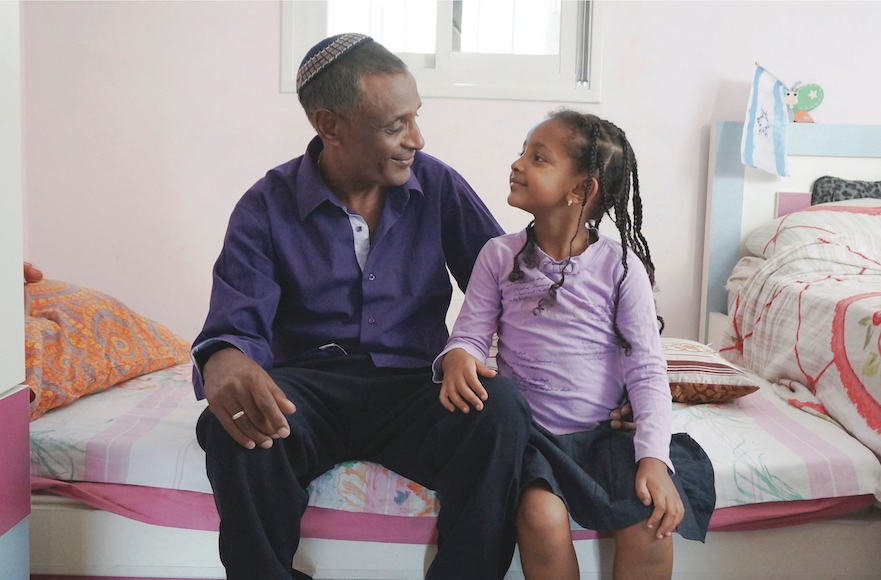 Amnon Shalo and his daughter, whom he is raising alone after divorcing his wife shortly after their arrival from Ethiopia in the 1980s. (Beit Hatfutsot)

It was Amnon Shalo’s wedding portrait that first caught Malassa’s eye. The photo shows a young, innocent-looking couple standing shyly in front of the camera, their faces filled with optimism. So Malassa was surprised to learn that 30 years later, Shalo is raising his young daughter as a divorcee. His young marriage faltered in their strange new home, Malassa says. Today, Shalo lives with his daughter in his parents’ home, the two generations under a single roof forming a striking dichotomy.

“He is still trying to find what we lost by coming here,” Malassa says. “The way marriages are different here and based on different things.” 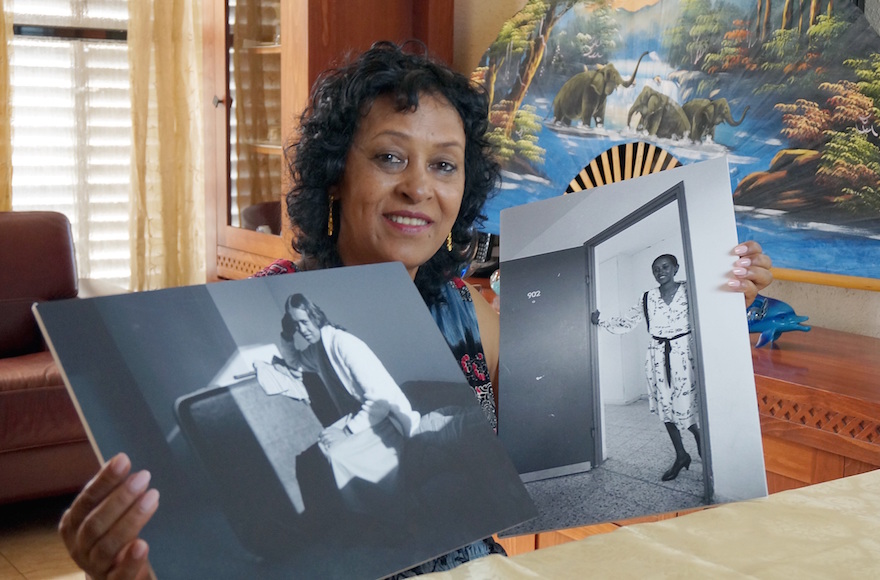 When Palago Yimar Samami was a child in Ethiopia, she dreamed of becoming a nurse. But in Israel, the language barrier proved daunting and only in the past few years has she felt confident enough to begin her training. Samami, 50, who now lives in Bat Yam with her husband and four children, is working at Wolfson Medical Center and finally realizing her dream.

“Within the 10 stories, there is an entire world that we are showing,” Malassa says. “There are ups and downs and all kind of obstacles. At its core, it’s just ordinary Israeli life.” 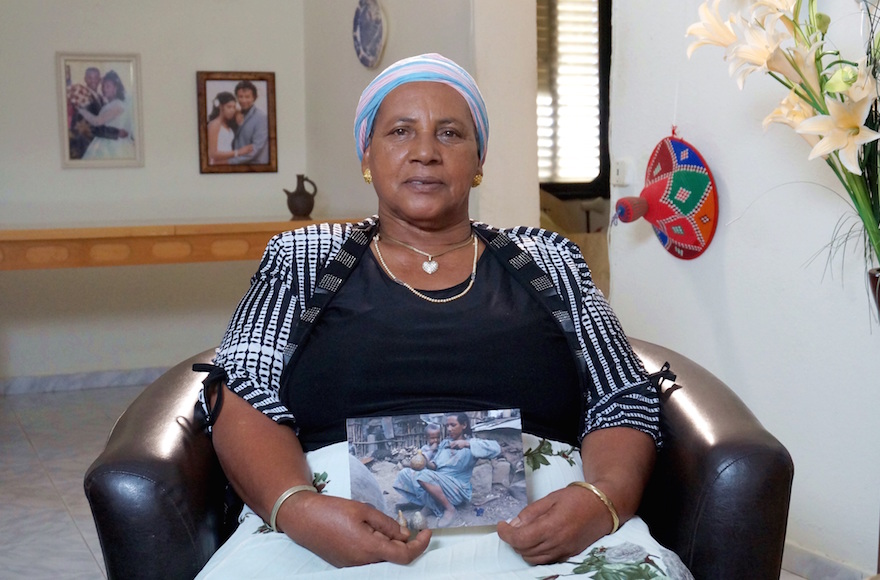 Berchco Adela lost five babies before the birth of her sixth, named Doctor because his birth had healed her. (Beit Hatfutsot)

One of the pictures that initially caught Malassa’s eye was of a young woman making pottery with one hand while breastfeeding a baby. The woman was Berchco Adela, now 68, an Ashdod resident who had lost five babies before the birth of the boy in the picture. Because his birth had, in a sense, healed her, Adela decided to name him Doctor.

“I love this story because it’s so universal,” Malassa says. 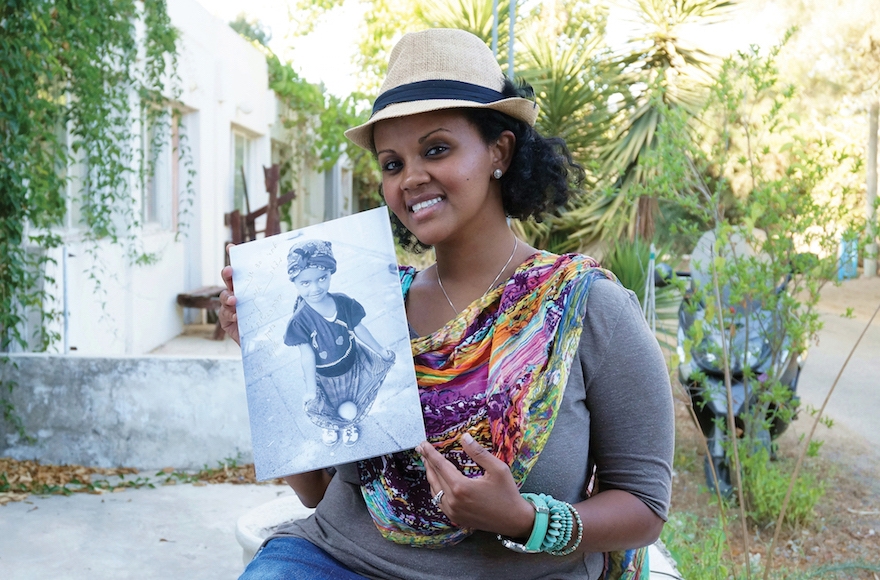 Zehava Mahari came to Israel as a child and now lives in California. (Beit Hatfutsot)

Zehava Mahari, 36, is married with one child. Despite coming to Israel at a young age and growing up here, she lives today in California. Despite the Golden State’s sunshine, she says she misses Israel deeply, especially the freedom she felt as a child immigrant. 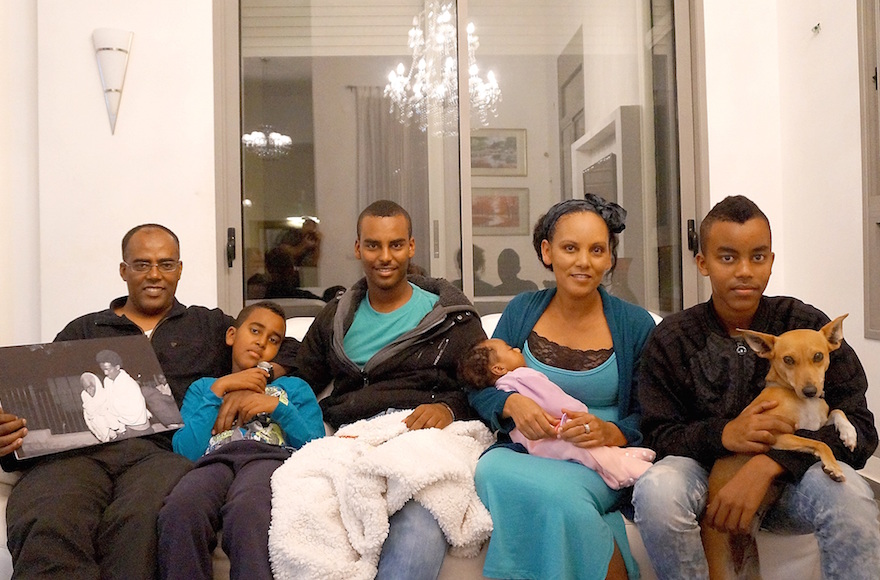 Dasa Livesi, a father of four, is an engineer with the Israel Electric Corp. (Beit Hatfutsot)

Dasa Livesi, 51, is considered the great success story of the 10 subjects, and one look at his resume makes it clear why. A married father of four, Livesi holds a degree from Israel’s prestigious Technion-Israel Institute of Technology and is one of the top department managers for the Israel Electric Corp. In his original photograph, snapped shortly after his arrival in Israel, Livesi looks thin and shell-shocked as he holds the arm of his elderly grandfather — an image that feels a lifetime removed from his situation today.

“He has this beautiful family and this beautiful house, and has done everything in his life by thinking, ‘OK, this is hard? I will beat it,’” Malassa says.

Nane Negate’s father struggled with depression and killed himself shortly after arriving in Israel from Ethiopia in the 1980s. (Beit Hatfutsot)

In Malassa’s photo of Nane Negate, she is sitting alone at a dining room table holding a black-and-white image of her extended family with palpable pain in her eyes. Malassa had not set out to find Nane. She was looking for her father, who appeared in several of Bacher’s photos as a boisterous family man wearing a constant grin. She learned that the smiling patriarch had been shattered by the struggles he faced in Israel and hanged himself a year after his arrival.

It was Nane who was left behind to tell Malassa her father’s story.

“Suicide is shameful in any culture, but for Nane, I think the motivation to tell me his story was to explain what really happened,” Malassa says. “She feels like no one here really knows who her dad was in Ethiopia, and this is her chance to tell his story.” 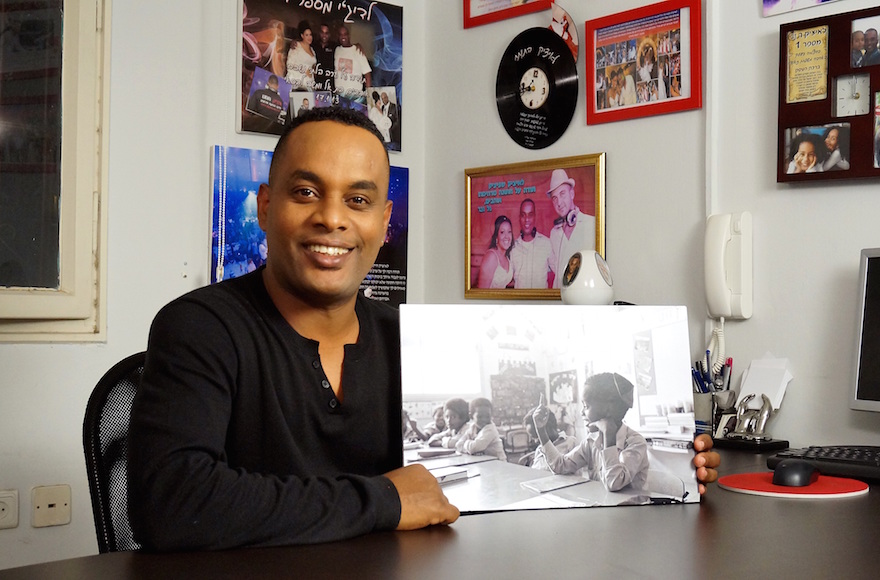 Itzik Tamano is the owner of a music company in Tel Aviv. (Beit Hatfutsot)

Itzik Tamano, 35, has filled his life in Israel with music. Today he and his wife, Mor, with whom he has three daughters, live in north Tel Aviv, but as a child in the hard-knock Gaza border town of Sderot, music became Tamano’s refuge and passion. He started working as a DJ at an early age and now is the owner of a company that provides music for all sorts of events.

(This article was sponsored by and produced in partnership with the Museum of the Jewish People at Beit Hatfutsot, the sole institution anywhere in the world devoted to sharing the complete story of the Jewish people with millions of visitors from all walks of life. The article was not assigned or reported by the JTA editorial team.)