Sanders: Being Jewish is ‘essential’ to who I am 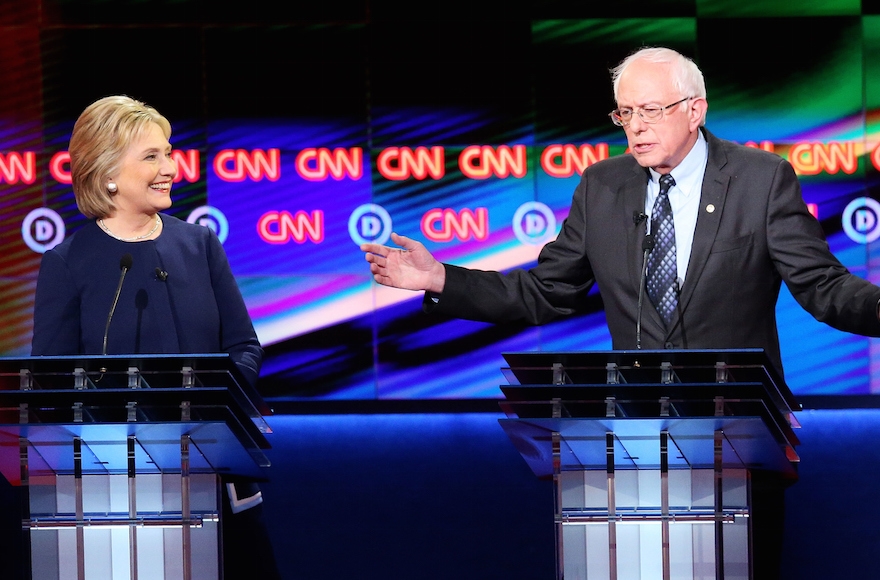 WASHINGTON (JTA) — Bernie Sanders said being Jewish is “essential” to who he is.

Sanders was asked during the Democratic presidential debate in Flint, Michigan, on Sunday evening about reports that Jews were disappointed that he appeared to have downplayed his Jewishness during his campaign.

“I am very proud to be Jewish, and being Jewish is so much of what I am,” Sanders, an Independent senator from Vermont, replied.

“Look, my father’s family was wiped out by Hitler in the Holocaust,” said Sanders, 74, who was born in Brooklyn, New York, and whose father immigrated to the United States from Poland.

“I know about what crazy and radical, and extremist politics mean,” he said. “I learned that lesson as a tiny, tiny child when my mother would take me shopping, and we would see people working in stores who had numbers on their arms because they were in Hitler’s concentration camp. I am very proud of being Jewish, and that is an essential part of who I am as a human being.”

Sanders’ relationship to his Jewish identity was never much of a national issue during his decades as a member of the U.S. House of Representatives and then as a senator from Vermont.

His history-making bid for the presidential nod brought the question to the fore, however, and in two earlier debate appearances he appeared to avoid raising it, even when it was clearly an issue.

Asked at a debate in February about the historic potential of his rival, Hillary Rodham Clinton, becoming the first woman president, Sanders said someone of his “background” moving into the White House would be historic as well, without specifying that he would be the first Jewish president.

Sanders made history last month when he became the first Jewish candidate to win a nominating election, in New Hampshire.

He won handily in Maine on Sunday, the eighth contest he has won compared to Clinton’s 12. She continues to lead substantially in delegates. The next major contest is in Michigan, on Tuesday, and the former secretary of state is leading Sanders in polling.

Sanders and Clinton agreed on much during their debate, particularly on the need for accountability in Flint, where state government decisions about water piping have led to mass contamination of the drinking water.

They clashed on other issues. On gun control, Clinton highlighted Sanders’ opposition in the past to some measures. On the economy, Sanders emphasized his opposition to the 2008 bailout of the finance sector and Clinton’s Wall Street ties, while Clinton honed in on Sanders’ failure to fully support the Troubled Asset Relief Program that underwrote the automobile manufacturer bailout of the same year, which proved critical to protecting jobs in Michigan. And on trade, Sanders said he favored greater protections, while Clinton defended international commerce as healthy for the U.S. economy.