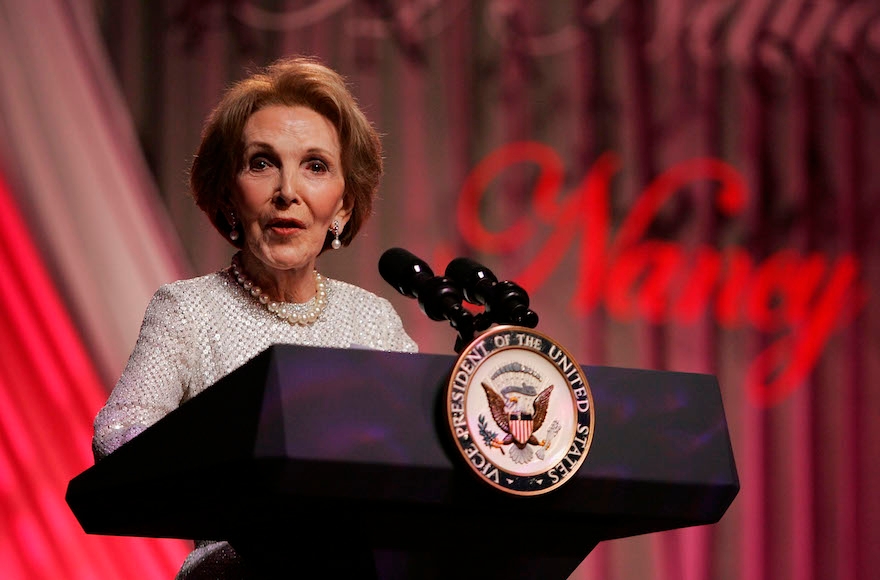 Former First Lady Nancy Reagan speaking at the end of the "A Nation Honors Nancy Reagan" dinner at the Ronald Reagan Building in Washington, D.C., May 11, 2005. (Joe Raedle/Getty Images)
Advertisement

(JTA ) — Nancy Reagan was remembered as “a great friend” of Israel by its country’s leaders expressing their condolences on the former first lady’s death.

Reagan died Sunday at her home in Bel-Air, California, of congestive heart failure, her assistant said. She was 94.

She will be buried next to her late husband at the Ronald Reagan Presidential Library in Simi Valley, according to the TMZ entertainment website, which first reported Reagan’s death, citing a close family member.

President Ronald Reagan died in 2004. The couple were married 52 years, and Nancy Reagan took care of her husband while he suffered from Alzheimer’s disease during the last decade of his life.

“I remember Nancy as a noble woman who supported President Reagan and stood by his side,” Israeli Prime Minister Benjamin Netanyahu said in a statement issued Sunday afternoon. “She will be remembered as a great friend of the State of Israel.”

Former Israeli President Shimon Peres in a statement wished his condolences “to the whole Reagan family, her friends and all citizens of the United States.” He called Nancy Reagan “President Ronald Reagan’s dedicated wife, a true partner in the president’s unique leadership, including his strong friendship with Israel.”

“I recall her noble nature and fierce fight against drugs and alcohol amongst youth. During her time as first lady, Reagan would illuminate the White House with a big smile and open heart.”

Nancy Reagan was known for her “Just Say No” to drugs campaign while serving as first lady. She was ridiculed for excessive spending and later accused of wielding too much power in the White House, especially in the hiring and firing of advisers, while consulting astrologers over the president’s schedule.

Nancy Davis, born Anne Frances Robbins, majored in drama at Smith College and then worked on the stage until signing a movie contract with MGM in 1949. She met Ronald Reagan in 1950 when he was president of the Screen Actors Guild. They married in 1952.