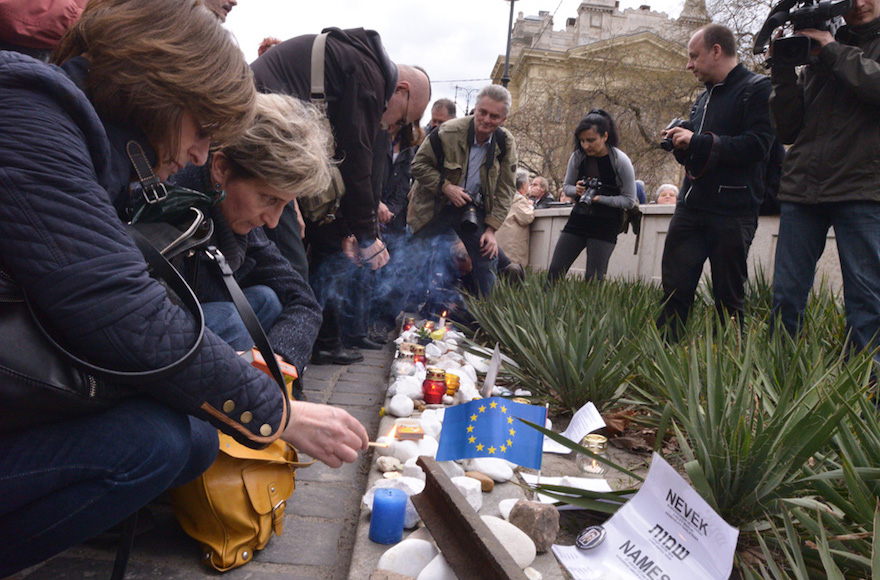 Protestors at a 2014 rally against a government plan to erect a statue in Budapest about the Holocaust. (Cnaan Liphshiz).
Advertisement

(JTA) – Hungarian officials likely anticipated some Jewish opposition to their decision to erect a monument in Budapest to a Holocaust-era lawmaker who promoted anti-Semitic legislation.

What they probably didn’t expect was that the Feb. 24 unveiling of a bust honoring Gyorgy Donath would attract a protest of mostly non-Jewish Hungarians. The protest would lead to the statue’s indefinite removal over vandalism concerns.

Hungary’s Jews have been fighting what one leading rabbi has called “the symbols war” against the government for years over the public veneration of Holocaust-era figures who promoted anti-Semitic laws. But the mostly non-Jewish protest, in which participants carried EU symbols and chanted anti-fascist slogans, was taken as a sign that the effort is winning allies beyond the Jewish community.

“This is not just the Jewish community’s fight,” said Anna Kovacs, 27, a non-Jewish translator and member of a Holocaust commemoration group. “It’s about the identity and future of this society. It’s our duty to ensure a second Holocaust doesn’t happen.”

Hungarian Jews launched the monument battle in 2014, when a statue seen as minimizing Hungarian complicity during the Holocaust was unveiled in Budapest’s Freedom Square. The monument, which depicted an angel (understood to represent Hungary) attacked by an eagle (understood to represent Germany), was vigorously opposed by the Hungarian Jewish umbrella group Mazsihisz, which briefly suspended its ties with the government after its unveiling.

“It began with Jewish community activities but has spread beyond to a protest front with members of many affiliations,” said Adam Csillag, a filmmaker who has documented the protest since that unveiling.

That protest movement, which comprises a loose coalition of Christians, liberal political activists and Hungarian Jews, scored its first victory last year when Prime Minister Viktor Orban scrapped a plan to erect a statue of Balint Homan, another Holocaust-era politician who prompted anti-Semitic laws. The Faith Church, a Pentecostal body with 70,000 members, provided approximately half the 700 protesters who gathered at a site 30 miles west of Budapest in December to protest the Homan statue, which was canceled following an international outcry. 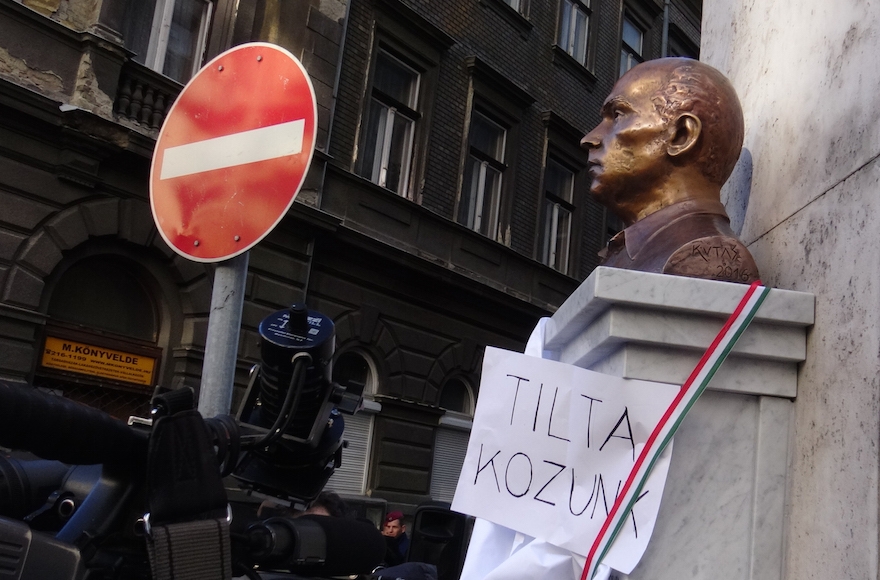 “Every time an anti-Semitic figure is honored, there is a significant resistance from the civil society, and the members of Faith Church often take part in these protests as anti-Semitism is contradictory to our moral values and faith,” said Daniel Kocsor, a 20-year-old church activist.

The symbols war comes at a time of rising nationalist fervor in Hungary driven by several factors: economic crises, opposition to EU interference in the country’s affairs, growing Russian assertiveness and the recent arrival on Hungary’s borders of hundreds of thousands of Muslim migrants from the Middle East. Wary of losing support to the far-right Jobbik party, Orban’s ruling Fidesz party has cracked down on liberal activist groups and increased efforts to celebrate figures like Donath and Honan, who are considered patriotic by the right.

Both wartime politicians supported legislation in the 1940s that targeted Jews. Homan, who served as culture minister, authored a law to limit the number of Jewish university students. Donath argued for a measure to bar any sexual relationship between a Jew and a non-Jew.

They died at the hands of communists and have been embraced by the far right as nationalist symbols of communist oppression. But critics of the government believe the effort to portray them as freedom fighters is merely a thin veil intended to obscure their virulent anti-Semitism.

READ: Pact of pariahs forming between Iran and Hungary’s Jobbik

Homan is “a marginal figure,” Kocsor said. “So the point of the monument … is to send a message because he’s a racist and an anti-Semite. That’s outrageous.”

Other partners to the anti-government coalition include Kovacs’ group Living Memorial, which started in the wake of the Freedom Square protest and now meets in the square twice a week to display alternative commemorations featuring Holocaust-themed artwork. Also participating is Dialogue for Hungary, a small opposition political party that took part in the Donath protest.

“There’s a nostalgia toward the good old Hungary” of the 1940s, historian Eva Balogh said. “It’s scaring a lot of people and driving them into action.”