Israelis grapple with Pew finding of support for Arab expulsion 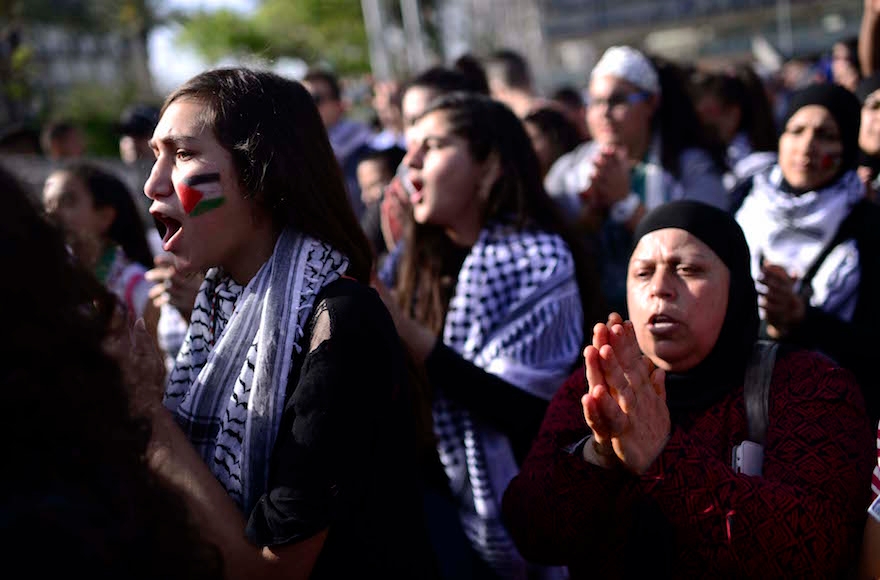 TEL AVIV (JTA) — In a survey that spanned politics, religion and interfaith relations, one statistic stood out: nearly half of Israel’s Jews support expelling the country’s Arabs.

The Pew Research Center’s study of Israelis’ attitudes, which had its findings released Tuesday, had asked respondents whether they agreed that “Arabs should be expelled or transferred from Israel.” Forty-eight percent of Israeli Jews agreed, while 46 percent did not. Among self-described right-wing Jews, 72 percent agreed, along with 71 percent of religious Zionists.

The figure was inconsistent with the findings of previous studies and provoked strong reactions in a country that sees its Arab minority as proof of its commitment to democratic values and respect for diversity. It has also shined a spotlight on what has been seen previously as a fringe proposal. No party in the Israeli Knesset advocates mass population transfer, and it has never been seriously discussed as a solution to the Israeli-Palestinian conflict.

“The idea that the State of Israel could be a democracy only for its Jewish citizens is unconscionable and we must find a way to address this,” Israeli President Reuven Rivlin said at a meeting with officials of the Washington-based Pew center. “I believe that also our democratic values are born out of our Jewish faith, a love for the stranger and equality before the law.”

Rivlin called on the public to engage in “soul-searching and moral reflection.”

But Alan Cooperman, the Pew study’s lead author, says support for expulsion comports with other data points in the survey. Cooperman pointed to survey findings that nearly four out of five Israeli Jews say Israel should give preferential treatment to Jews, 60 percent of Israeli Jews believe God gave the land to them, and that majorities of religious Zionists and haredi Orthodox also feel Jewish law should be the law of the state.

“You see it really makes sense,” he said. “Support is strongest among [religious Zionists], very high among settlers.”

Analysts say Jewish animosity toward Israeli Arabs has been exacerbated by the recent wave of Palestinian terror attacks and a government response that some consider inflammatory. Rawnak Natour, the co-director of Sikkuy, a nonprofit that works toward Arab-Jewish coexistence, pointed to Prime Minister Benjamin Netanyahu’s speech decrying “two nations within Israel” following a January terror attack in Tel Aviv.

“I think there’s a feeling of fear here that’s strengthened by the political echelon,” Natour said. “There’s a lack of familiarity of the other side.”

The Pew finding on expulsion is significantly higher than other recent polls that have sought to measure Israeli attitudes toward coexistence. The 2015 Israel Democracy Index, a survey published annually by the Israel Democracy Institute, found 37.5 percent support for the government merely encouraging Arab emigration.

A 2015 poll by Haifa University Professor Sammy Smooha found that six in 10 Israeli Jews felt “it would be good for Arabs and Jews to always live together in Israel.” That survey also found 32 percent of respondents in favor of encouraging Arabs to leave Israel in exchange for compensation.

Israeli pollsters have laid blame on the question itself, calling it vague and misleading. Is the question about Israeli Arabs, West Bank Palestinians or both? When would this expulsion occur, and under what conditions? Would the Arab refugees be compensated?

“It was asked in a very unclear way,” said Tamar Hermann, academic director of IDI’s Guttman Center for Surveys. “If we didn’t get a majority on a more cautious and less aggressive version [of the question], what happened here? I would say take it with a grain of salt.”

The statistic is a sign not only of extremism but also of polarization in Israeli society, says Steven M. Cohen, a sociology professor at New York’s Hebrew Union College-Jewish Institute of Religion who consulted on the Pew study. Regardless of the exact level of support, he called the figure a “warning sign” for Israeli and Jewish leaders.

“There’s a lot of support for this notion that God gave this land to me — not to them, to me,” Cohen said at a panel discussion of the survey Tuesday in Tel Aviv. “Is there a context in which it seems the authorities are trying to diminish the place of minorities in this country? Is that happening? If that’s happening, then this question becomes very critical.”