To understand American Jews who support Trump, read this 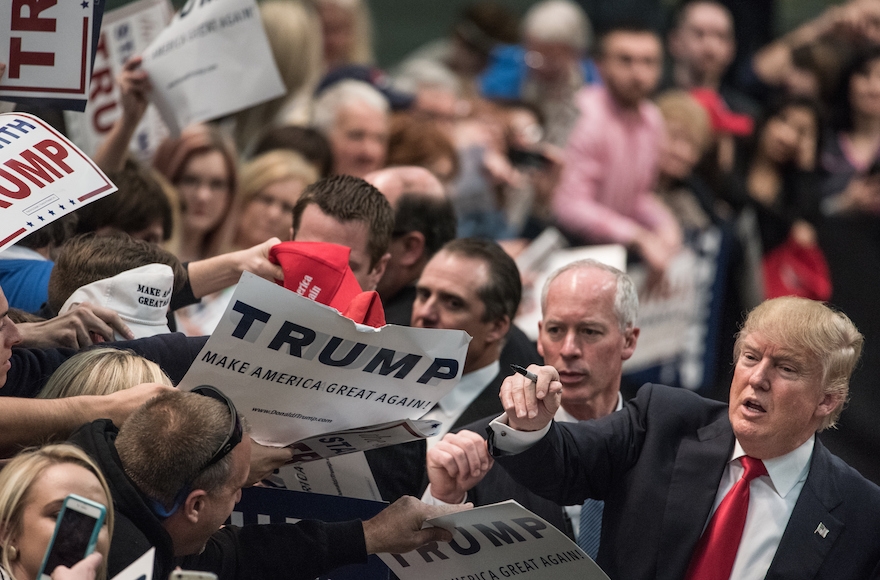 NEW YORK (JTA) – America’s political system is broken, and the last thing the country needs is another career politician at the helm.

With money more than ever a corrupting influence in politics, the White House should be occupied by someone who isn’t beholden to well-funded lobbyists or super PACs.

Politicians have a real problem with honesty. The country needs someone authentic who isn’t afraid to speak the truth and disrupt convention, even if it’s not politically correct.

If you’re planning to vote for Donald Trump for president, you’ve probably argued one or more of these points.

Trump’s electoral success may be bewildering to many American Jews, the vast majority of whom vote reliably Democratic, and alarming to those disturbed by his delay in disavowing the support of white supremacist David Duke, the bullying at Trump rallies and his specific positions (or lack thereof) on a range of issues.

But Trump’s Jewish supporters see the candidate as refreshingly honest, unafraid to challenge political orthodoxies (including conservative ones) and successful in business – which, they say, is just the sort of experience a president needs. They also believe he’ll be good for Israel, not least because, they say, he’s a savvy negotiator who knows enough not to publicly take sides in the Israeli-Palestinian conflict.

“People are bent out of shape because he won’t take sides. I’m a negotiator myself; that’s how you do things,” said Gedaliah Shaps, 49, an entrepreneur and self-described modern Orthodox liberal Jew from New York’s Long Island. “But I believe he truly has Israel’s best interests at heart. He says Israel is going to love him, and I believe that.”

Like many other Jewish supporters of Trump, Shaps noted that Trump’s daughter, Ivanka, is an Orthodox Jew (she converted before she married husband Jared Kushner).

While Trump’s opponents see him as a demagogue and vulgar blowhard who would lead the country to disaster, his supporters minimize his bullying, believe his lack of detailed policy prescriptions is a sign that pragmatism would trump ideology in a Trump presidency, and are generally willing to give Trump the benefit of the doubt.

“I think he’s honest. Obviously he has a good business background,” said Marc Rauch, 64, a film producer in Los Angeles who is originally from Brooklyn. “He’s not a politician, so I think a lot of stuff he’s responding to on the fly. He hasn’t spent 20 years running for office. We need real leaders, not professional politicians.

“Trump is somebody who has real experience. What I don’t want is another guy who has done nothing in his life other than run for public office.”

For many Jewish Trump supporters, as for many Americans who back him, Trump’s main appeal is they believe he has the best shot at defeating Hillary Clinton in the general election in November.

“This is to me more about who I don’t like than who I like,” said Lawrence Stern, 69, an attorney in Los Angeles. “I have been a lifelong registered Democrat. However, in the last few federal elections I have seen the Democratic Party move away from what I believe were its roots and its core foundation to a closer relationship to those who are both anti-Semitic and anti-Israel.”

Stern said he’s voting against Clinton because of her support for the Iran nuclear deal, her infamous 1999 embrace of Yasser Arafat’s wife, Suha, and the support given to the Clinton Foundation from Arab donors.

Some of the political sentiments driving Jewish support for Trump echo widely held views among Americans of all political stripes. They are fed up with the political gridlock and dysfunction in Washington. They decry the corrupting influence of money in politics. They don’t trust politicians.

Indeed, widespread exasperation with the ways of Washington helps explain both major surprises of the 2016 presidential campaign: the rise of Sen. Bernie Sanders on the left and Trump on the right. In each candidate, supporters see a great hope for major political change.

“He’s not without flaws,” Sheldon Wolf, 53, the CEO of a computer software company in Tampa, Florida, said of Trump. “But I look at what he can bring to the table. People are so upset about our do-nothing Congress. If there’s one guy who can possibly bring these people together and work together, it’s Trump. It’s sure not Bernie Sanders, and it’s sure not Ted Cruz.”

Asked about Trump’s delay in disavowing Duke, or the remarks some found offensive at last fall’s Republican Jewish Coalition conference in Washington, D.C., when Trump seemed to invoke classic stereotypes about Jews and money, Trump’s Jewish supporters say they don’t believe he’s a white supremacist or a bigot. Many noted his longstanding support for Israel, including his 2004 role as the grand marshal of the annual Salute to Israel Parade in New York.

“Some of his behavior raises questions, but I’m ready for that risk because the other Republicans I find horrible,” said Dr. Ben Enav, 44, a pediatric gastroenterologist from the Washington suburbs of northern Virginia.

“He definitely says some things I am not always comfortable with when it comes to race or sexism,” Enav said. “But I always wondered: How does someone have such a big organization and he has never been accused of bigotry or sexism? I think some of his rhetoric is showboating and I think some of it is reality. He is willing to say what a lot of people are thinking.”

There appear to be some inherent contradictions in the qualities many of Trump’s Jewish supporters say they like about him. They see his brash and sometimes crude persona as authentic, but believe he’ll behave differently as president. They admire his business successes but disregard or explain away his business failures. They acknowledge his big ego but say Trump understands that being president is more about assembling the right team of advisers than about the man himself.

In short, his supporters project onto Trump the positive things they want in a president and downplay the negative signs Trump opponents find so alarming.

“People say he’s failed so many times — well, you learn from failure. You’re not going to succeed unless you fail many times,” said Lisa, a 32-year-old Jewish voter from Los Angeles who asked that her last name not be published. “I think a lot of his brash statements that people bag on him for are because you have to get a political conversation started. I don’t think he’d necessarily act that way in a presidential meeting. The person you see on TV is actually very different than how he’d be as president.”

In fact, many Jewish Trump supporters see him as a relative moderate, someone guided more by reason than by ideology.

“Compared to the other Republicans, on certain issues he’s probably the most liberal out of all of them,” said Orna Enav, 45, an Israeli immigrant and Ben Enav’s wife. “On social issues like gay marriage or abortion, which he’s not vocal about, I believe he’s probably more liberal than anybody else.”

She added, “I can understand why some people in the Republican Party don’t want him.”