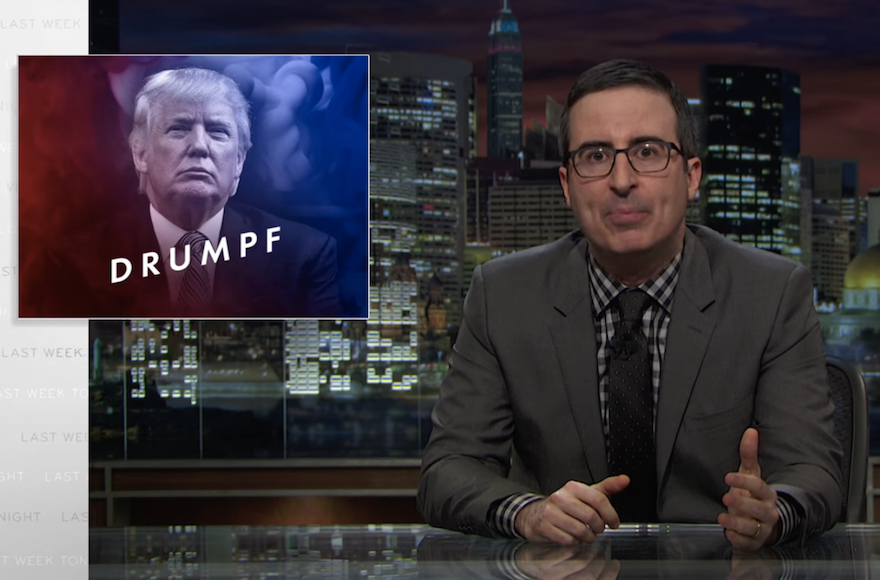 The AJCongress — a nearly century-old Jewish advocacy group whose operations have somewhat diminished in recent years — on Thursday emailed out the results of poll on which presidential candidate its members think would be best for Israel, titled “The Results Are In!”

At the top of the AJCongress list is Sen. Ted Cruz, R-Texas, followed by a name that’s trending online at the moment: “Donald Drumpf.”

A couple hours after sending the email, the AJCongress issued a corrected version with a note saying, “The previous version of this email included an unfortunate and unintended spelling mistake. No offense was meant by it. We apologize for any confusion.”

The poll purports to reflect the views of “nearly one thousand AJCongress members.” You can vote here. AJCongress told JTA they would issue a statement about the email later Friday.

Oliver’s segment, which has been viewed more than 20 million times on YouTube, has created something of a Drumpf phenomenon. The hashtag #MakeDonaldDrumpfAgain is trending on social media, and “Donald Drumpf” was the second most searched for candidate on Super Tuesday, behind only Trump himself and ahead of Sen. Marco Rubio, R-Fla., and Cruz.

Oliver has sold out of an initial run of 35,000 “Make Donald Drumpf Again” hats, which riff on Trump’s campaign slogan, “Make America Great Again.” Trump is the front-runner for the Republican presidential nod.

Oliver, who got his TV start as a correspondent on Jon Stewart’s “The Daily Show,” said on the Feb. 28 show that Trump had put the name issue in play with a 2013 tweet about his former Jewish employer.

If Jon Stewart is so above it all & legit, why did he change his name from Jonathan Leibowitz? He should be proud of his heritage!

Oliver went on to criticize the Trump brand, highlighting questionable business decisions he said the real estate billionaire has made over the years. After the show, the British host’s team even built an Internet browser extension that changes all mentions of Trump to Drumpf.

Maybe somebody at the AJCongress downloaded it.

UPDATE: The AJCongress sent JTA an email Friday afternoon expressing regret for the Drumpf “mistake,” which reads in full: “Recently, the comedy program ‘Last Week Tonight with John Oliver’ created a Google Chrome extension as part of a bit about Donald Trump. Like many, one of our employees downloaded the extension on a personal computer, and then forgot about it. Its presence resulted in an unfortunate, but unintentional mistake in an email to our supporters yesterday. The American Jewish Congress in no way intended to be disrespectful and we regret that it happened.”