Sarah Silverman as Hitler: Donald Trump ‘gets it’ 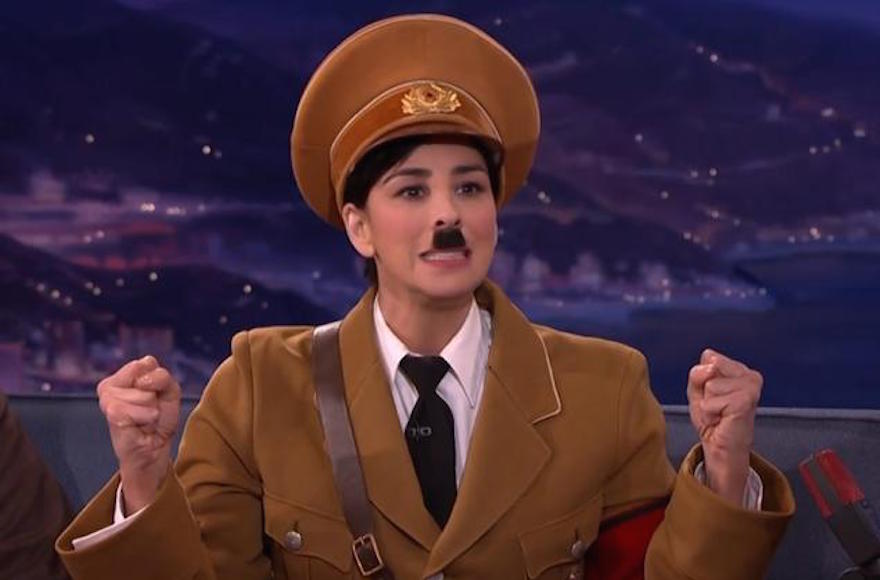 (JTA) — Sarah Silverman just took the Trump-Hitler comparisons to the next level.

The Jewish comedian appeared on TBS’ “Conan” Thursday dressed as Adolf Hitler and took issue with her character being “unfavorably” equated with the Republican presidential front-runner in the media, as host Conan O’Brien put it.

“Don’t get me wrong, Conan, I agree with a lot of what he says. A lot. Like 90 percent of what he says, I’m like this guy gets it,” Silverman’s Hitler said after walking on stage to loud applause. “But it’s just, I don’t like the way he says it. It’s crass, you know?”

Silverman’s Hitler then criticized Trump for talking about his “penis size on national television.”

“I famously have a micropenis, that’s what makes a tyrant,” Silverman said.

“All these comparisons to Trump, it’s like, it bums me out, you know what I mean?” Sometimes I watch him and I’m like, ‘Is that how people see me?’ And I have to be honest, Trump, he’s starting to make me rethink some of the things I’ve done.”

Several public figures, including comedians Louis C.K. and Bill Maher and former New Jersey Gov. Christine Todd Whitman, have compared Trump to Hitler in recent months over some of the real estate mogul’s comments and policies.

Trump also came under fire last week for having supporters at campaign events raise their right hands and pledge to vote for him. The practice reminded some of the infamous “heil Hitler” salute.

A look at tomorrow’s front page…
‘TRUMP IS HITLER’https://t.co/gSH8f2cCDV pic.twitter.com/dlxllcdMVu

Trump has called the comparisons “ridiculous.”