Should we get hammered on Purim — and Election Day? 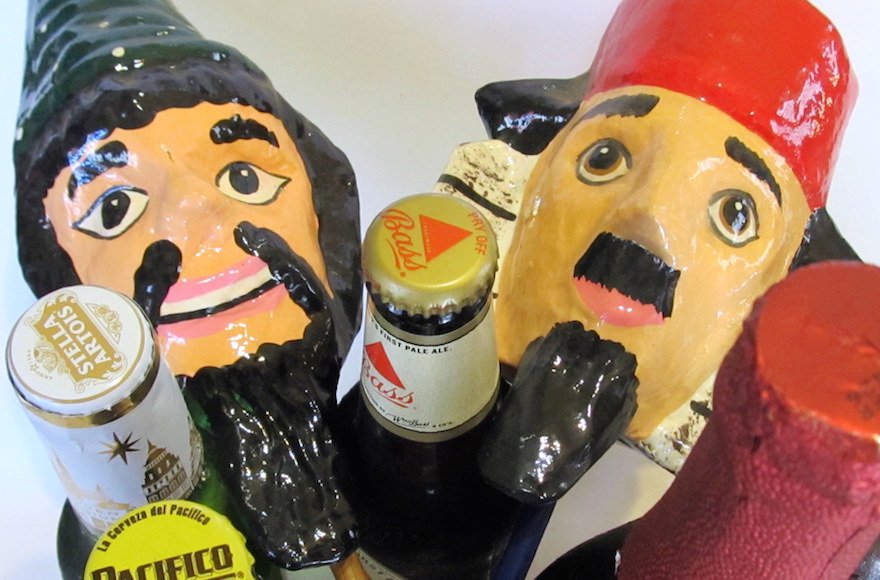 LOS ANGELES (JTA) — Purim parties are just around the corner — as is the presidential election. This got me thinking: What does the holiday’s operative phrase, “ad lo yada,” “until one no longer knows,” really mean?

Traditionally, this rabbinic license to party, derived from the Talmud, has been taken to mean one should drink until he or she no longer knows the difference between the two prime Purim players, the wise and brave Mordechai, and the evil schemer Haman, who had plotted to kill the Jews.

But Haman and Mordechai are characters in an ancient story read just once a year. What about confusing a duo who are higher up in our news feeds? Should we drink so much that we confuse the differences between Hillary and Bernie? Cruz and Rubio? Trump and anybody?

Is the Talmud asking us to enter a wasted state of “I don’t care”? Is it saying “lighten up” and forget the battles, political or otherwise, of the day? Or is there some other message here about the morning after?

Also, since we’ve had several conversations over the years, I knew this was one rabbi with a discerning taste in spirits.

I asked him straight out, no chaser: “Are we supposed to get blotto on Purim?”

Kaplan, who is keenly aware of the dangers of excessive drinking, responded that there is a “whole spectrum of answers.”

Some, he said, “take the statement literally and say, ‘Yes, you must absolutely get so drunk you don’t know.’ And then there’s the exact opposite, which I think is from Rambam, which says, ‘You just drink a little, take a nap and you’re good.’”

As for getting sloshed enough to not tell the difference between Haman and Mordechai — or The Donald and Bernie, for that matter — Kaplan cautioned that people have vastly different levels of tolerance.

“Some people might get really drunk but still be able to maintain those moral distinctions,” he said.

“Part of the ethos of Purim is switching everything around, of turning things upside down. It’s the sort of topsy-turvy day of the Jewish calendar.”

READ: The masks we wear on Purim — and on Facebook

Unknowingly, Kaplan was providing rationale for my idea to turn Purim upside down politically, and party until I couldn’t tell the difference among the candidates. To get into what the rabbi referred to as “mental flipping,” I wondered: Should I alternately wear Trump and Clinton masks? Should I sip wine and switch back and forth between Fox News and MSNBC until they become blurred into one?

Snapping me from my fantasy, Kaplan wondered about “people who are unable to distinguish and discern,” as he put it. That is, people who without the benefit of alcohol are already confused between Haman and Mordechai, between curses and blessings.

“If you can’t see the difference between curses and blessings, maybe Purim should be a day when you are going to straighten that out,” I said.

Maybe this could apply to the election season as well, I thought.

“Are you suggesting that Purim is a good time to take a rest from politics?” I asked.

“Sure, Purim is as great a time to let our political affiliations take a rest as ever,” Kaplan said. “One of the messages of Purim is coming together as a people, while politics has a divisive element to it.”

“What will you be drinking on Purim?” I asked, searching for something for which we could both campaign.

As a fan of Southern California’s craft brew industry, he acknowledged a preference for “IPAs, sours and barleywines.”

“What does it feel like when you can’t tell the difference between Mordechai and Haman?” I asked.

“I tend to retain my intellectual faculties when drinking,” Kaplan answered. Yet Purim is a time when someone “can just experience a carelessness,” he added.

But then, of course, there’s always the specter of the morning after.

“I tend to recover well off of whiskey and beer,” Kaplan said, “but tequila is another story.”

Purim may be a celebratory holiday, but this got me worrying: Are we experiencing a carelessness in our current political climate? Is there a benefit from blurring the distinctions among candidates and parties? Or are we just barreling toward a massive hangover come the first Wednesday in November?

Come the morning after Election Day, I started envisioning the kinds of tequila sunrises we might see. And I hope, by then, we’ll have figured out the difference between curses and blessings.