Trump threatens Sanders: I’ll send my supporters to your rallies 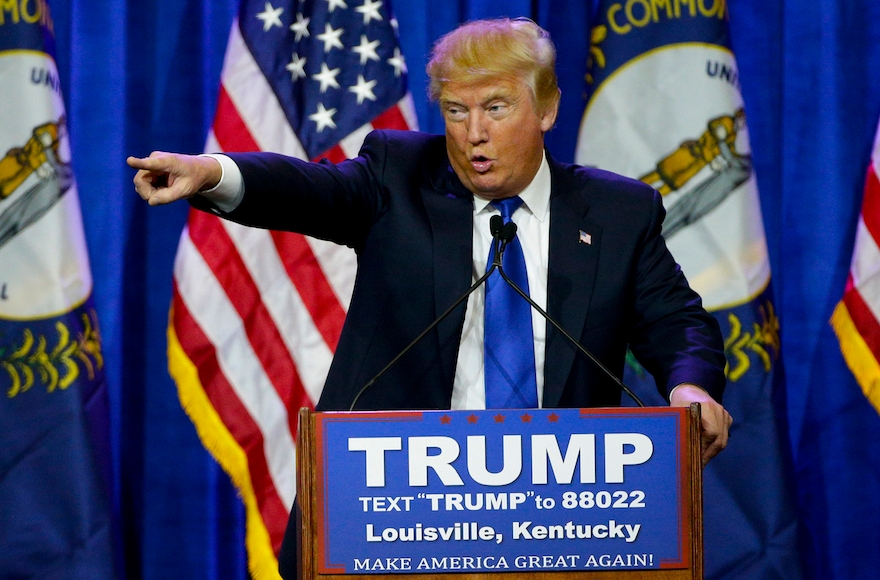 (JTA) — A day after Democratic presidential candidate Bernie Sanders called Donald Trump a “pathological liar,” the Republican front-runner ramped up the rhetoric, threatening to send his supporters to Sanders rallies.

Trump has accused Sanders supporters of disrupting his rallies, including one in Chicago on Friday night that was canceled following skirmishes between backers of the Republican front-runner and protesters.

Early Sunday morning, in a tweet, Trump wrote: “Bernie Sanders is lying when he says his disruptors aren’t told to go to my events. Be careful Bernie, or my supporters will go to yours!”

On Saturday morning, at a rally in Dayton, Ohio, Trump talked about the Chicago event.

“All of a sudden a planned attack just came out of nowhere,” Trump said, adding that his supporters “were taunted, they were harassed by these other people, these other people by the way, some represented Bernie, our communist friend.”

“Now really Bernie should tell his people … he should really get up and say to his people, ‘stop, stop,’” Trump said.

The Sanders campaign said in a statement released Saturday in response to Trump’s accusations: “As is the case virtually every day, Donald Trump is showing the American people that he is a pathological liar. Obviously, while I appreciate that we had supporters at Trump’s rally in Chicago, our campaign did not organize the protests.”

The clashes in Chicago come on the heels of violent incidents at other Trump rallies against protesters and journalists. Along with Trump and his supports, the other Republican candidates criticized the behavior of the Chicago protesters.

Also Saturday, a Trump supporter shouted “Go to Auschwitz” during a rally for the candidate in Kansas City, Missouri.

Earlier this month, Trump came under fire for asking supporters at a rally in Florida to raise their right hand and pledge to vote for him, prompting critics to compare the pledge to the Nazi salute.

Meanwhile, a woman caught in a photo making a Nazi salute outside the Chicago arena where the Trump rally was canceled told The New York Times that she used the gesture as a type of counter protest against those who compare Trump to the Nazi leader.

Birgitt Peterson, 69, who was born in West Berlin in 1946 and became an American citizen in 1982, told the Times she took offense to the comparison of Trump to Hitler. She asserted that she is not a Nazi sympathizer, as some who have seen the photo have suggested.

“They said Trump is a second Hitler. I said do you know what that sign stands for? Do you know who Hitler really was?” Peterson said.  “I make the point that they are demonstrating something they had no knowledge about. If you want to do it right, you do it right. You don’t know what you are doing.”