These may be America’s proudest Shabbos goys 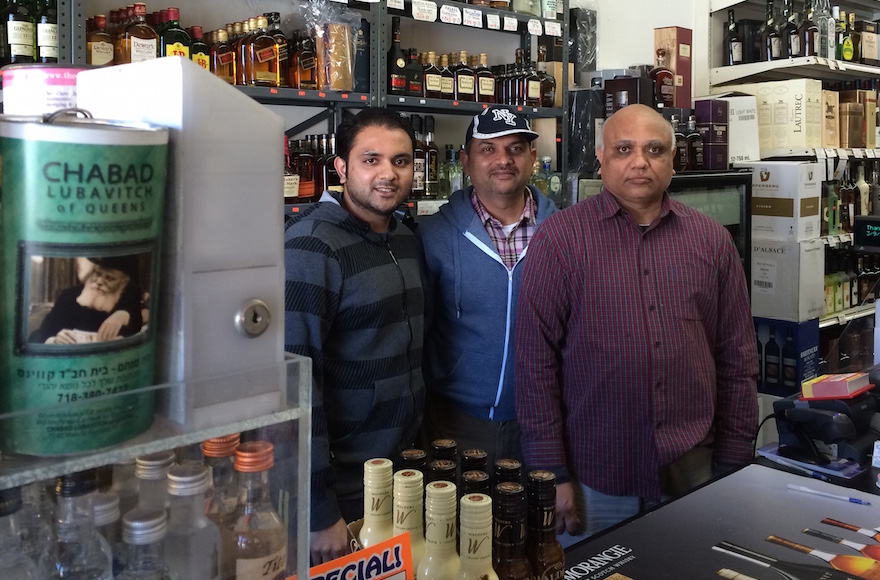 Patel is a manager of Suhag Wine & Liquors, a family-owned business in the heavily Orthodox neighborhood of Kew Gardens Hills, in Queens. He’s a Hindu immigrant from India, but the vast majority of his customers are religious Jews, and nearly all the wine and spirits he sells are kosher.

Saturday is the store’s slowest day for sales, but there’s another service Patel provides that makes him indispensable: He’s a Shabbos goy. He even has a sign on the door advertising that fact.

“Shabbos Goy,” the signs says. “If you need help on Shabbos, please ask us.”

In Orthodox households, vital everyday tasks such as turning lights on and off, using electrical appliances and cooking are forbidden on the Sabbath. Religious Jews use all sorts of workarounds – electric timers, preprogrammed thermostats, special hotplates – but sometimes it’s not enough. A bedroom light may accidentally be left on. A cool day may unexpectedly turn sweltering. The hotplate may have been left unplugged.

That’s where the Shabbos goy comes in – a non-Jew who can perform forbidden tasks for Jews.

“If someone needs anything, we go and do it for them,” Patel told JTA. “They might need us to turn off a stove. Or they left the fridge light on. Sometimes kids turn on the light by mistake.”

Because business is very slow on Saturdays, Patel is usually the only one minding the store. So when Orthodox customers come in and ask for help, Patel locks up and follows them home. He usually gets about five requests per Shabbos, he says, using the Yiddish-style pronunciation. There is no charge for the service.

“Initially, I definitely thought it was strange,” said Patel, who has worked at the store, wedged between a laundromat and a kosher pizza shop on Main Street, for seven years. “When my family bought this business 20 years ago, we had no idea about the Jewish community. We didn’t know their customs. But religion is religion. We’re happy to help.” 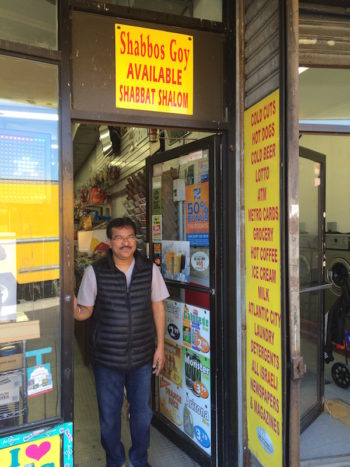 The Patels have been serving as Shabbos goys for two decades, but they only put up the sign advertising that fact in the last year. Goy, which literally means “nation” in Hebrew, is often considered a pejorative term for non-Jews, but it is used matter-of-factly in many Orthodox circles. Patel said he wasn’t aware some considered it offensive.

“Most people don’t believe us when they see that sign,” he said. “Our customers wanted us to put it up. We were providing the service anyway, so they said, ‘Why not put up a sign?’”

Two doors down, Arvind Patel (no relation), the owner of the local convenience store, also takes pride in serving as a Shabbos goy. He, too, has a sign on his shop, Ambe Grocery: “Shabbos goy available,” it reads. “Shabbat Shalom.”

“I’m the original Shabbos goy,” Arvind boasts. “I’ve been doing this for 30 years. All the rabbis know me. They’re like family.”

Martin Goldman, an Orthodox Jewish criminal defense attorney who has lived in Kew Gardens Hills for more than three decades, calls Arvind “one of the true members of Chasidei Umos Haolam,” or Righteous Among the Nations — a Jewish term of high praise for non-Jews.

“He’s a classic example of how Jews and non-Jews can live together in peace and harmony,” Goldman told JTA.

“Once it was an exceptionally hot Shabbos day and he had his cousin come with me to my home three blocks away and turn on the air conditioning,” Goldman said. “After Shabbos I went in and tipped him, but he never asked for a penny for it. As Jews, we can all learn derech eretz” — upstanding behavior — “from these guys.”

Arvind says he usually gets about eight or nine requests per Shabbat – more on holidays. On Sukkot, he helps fix sukkahs damaged by wind (Jewish law forbids repairing a sukkah on the festival’s holy days or Shabbat). On the High Holidays, Arvind patrols the neighborhood offering help wherever needed. The local Jews all know him, he says.

Arvind also owns the laundromat next door, which he notes uses only kosher-certified soap and fabric softener. A letter of certification from a body called the Central Rabbinical Congress of the U.S.A. and Canada attests to that.

“Say I speak a little Hebrew, too. Baruch Hashem yom yom!” Arvind says, using the Hebrew for “Thank God every day.” Many Israelis live in the neighborhood.

When an Orthodox patron leaves the store, Arvind calls out, “Yom tov! Tihiye bari” – Hebrew for “Have a good day. Stay healthy!”

Arvind says he also extends credit to Orthodox Jewish customers who come into the store on the Sabbath for items they unexpectedly need, like milk or soda. They always return and pay on Sunday or Monday, he says.

“I trust them a lot,” Arvind says. “Jewish people is same like my family – mishpachah.”