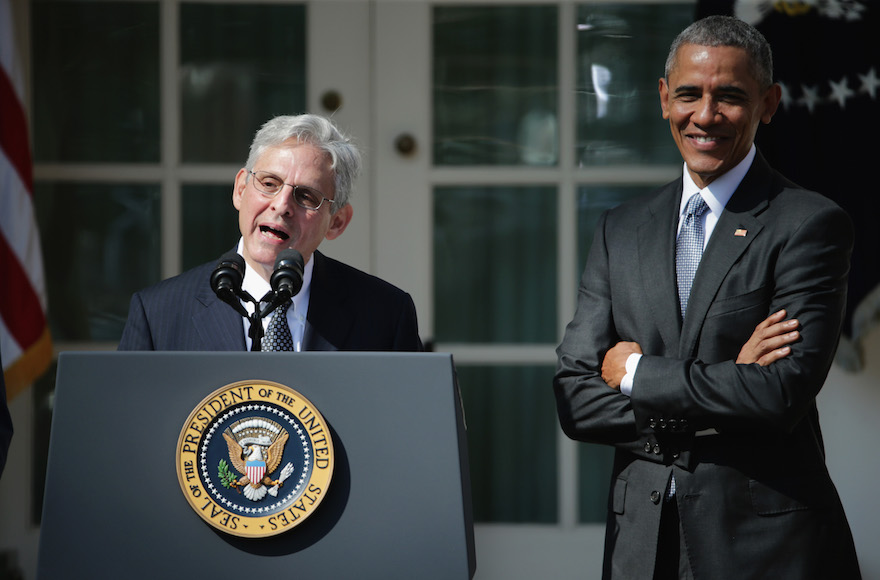 Judge Merrick Garland speaking after being nominated to the Supreme Court as President Barack Obama looks on, in the Rose Garden at the White House in Washington, D.C., March 16, 2016. (Chip Somodevilla/Getty Images)
Advertisement

(JTA) — New U.S. Supreme Court nominee Merrick Garland credited his Jewish grandparents, who he said fled to the United States from anti-Semitism in Russia, for putting him in position to be nominated.

“My family deserves much of the credit for the path that led me here. My grandparents left the Pale of Settlement at the border of western Russia and Eastern Europe in the early 1900s, fleeing anti-Semitism and hoping to make a better life for their children in America,” he said, choking up Wednesday morning in the White House Rose Garden as he accepted President Barack Obama’s nomination.

Garland said his father, who ran an advertising business from the basement of his family home, impressed upon him the “importance of hard work and fair dealing.” He said his mother’s volunteer work taught him the value of community service.

His father, Cyril, was born in Omaha, Nebraska, but hailed from a Latvian Jewish immigrant family. He died in 2000.

Garland’s mother, Shirley, who is still living, formerly was the director of volunteer services at the Council for Jewish Elderly in Chicago.

“For me there can be no higher public service than serving as a member of the U.S. Supreme Court,” said Garland, now the chief judge of the U.S. Court of Appeals for the District of Columbia. “This is the greatest honor of my life other than Lynn agreeing to marry me 28 years ago. It’s also the greatest gift I’ve ever received, except, and there’s another caveat, the birth of our daughters, Jessie and Becky.”

Obama called for Garland to be confirmed in a timely fashion, so he could sit with the court in the fall and fully participate in the court’s proceedings. He would fill the Supreme Court seat held by Antonin Scalia, who died last month.

“I simply ask Republicans in the Senate to give him a fair hearing and then a vote up or down,” Obama said. “I have fulfilled my constitutional duty. It is time for the Senate to do theirs.”

But later in the day, Mitch McConnell of Kentucky, the Senate majority leader, called Garland and told him the Senate would not take action on his nomination. McConnell has pledged Senate Republicans will not consider any Obama nominee to the Supreme Court.

The Senate will go on a two-week recess at the end of the week.

Garland, 63, a Chicago native, has worked in Washington, D.C., since the 1970s, first as a Supreme Court clerk, then a private lawyer, an assistant U.S. attorney and, since 1997, a federal judge.

He was named to the U.S. Court of Appeals for the District of Columbia circuit by President Bill Clinton in 1997 and became chief judge in 2013. He reportedly was on Obama’s short list for a place on the Supreme Court when a seat opened in 2009, but Obama ultimately nominated Sonia Sotomayor.

If confirmed, Garland would be the fourth Jewish justice on the nation’s highest court, which is comprised entirely of Jews and Catholics. The three current Jewish members are Ruth Bader Ginsburg, Elana Kagan and Stephen Breyer.

Clinton first nominated Garland in 1995, but the Republican-controlled Senate dragged its feet on his confirmation. After Clinton won reelection in 1996, he renominated Garland. In March 1997, the judge was confirmed by a 76-23 vote with the backing of majorities in both parties, including seven current Republican senators.